Kioxia Exceria Plus 1TB Against Its Competitors in 2021 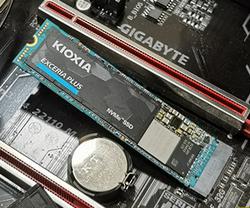 Kioxia Exceria Plus NVMe 1TB PCIe 3.0 Gen3x4 SSD
Author's Choice
Kioxia Exceria Plus is the flagship SSD in the current Kioxia (also known as Toshiba) line of SSDs. If you are a gamer or "enthusiast", or just need a drive for work, Kioxia Exceria Plus will add you speed three times more than any average SSD. When SLC cache gets full, speed drops a little, but the drop is not that critical as you may find in simpler models. The drive doesn't have any critical drawbacks. So, if you are not planning upgrading to PCIe 4.0, Kioxia Exceria Plus is definitely a model worth considering. Highly recommended!
Read Verified Customer Reviews

But how is it compared to other SSDs available on the market? Let’s see what makes it so different.

So what makes Kioxia Exceria Plus different in the abundance of features. 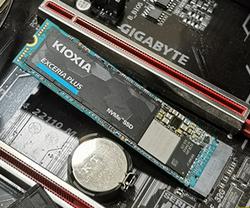 For those readers who don't follow all the computer hardware news closely, Kioxia's name may be unfamiliar. In fact, it's not a new unknown manufacturer. In 2018, Toshiba Memory Corporation was separated from the Toshiba conglomerate, and in March 2019 it became a fully owned subsidiary of Toshiba Memory Holdings Corporation. And in October 2019 it was renamed into Kioxia. The name was obtained by combining the Japanese word "kioku", which is translated as "memory" and Greek "axia", meaning “value”. The company manufactures most of the components for its products by itself.

What is in the package?

Kioxia Exceria Plus, as the flagship model has got a bigger and more representative box, and not just standard transparent blisters. You will find no bonuses in the package, just the drive itself and the documentation.

Kioxia Exceria Plus is a typical M.2 SSD in the 2280 form factor with PCI Express 3.0 x4 interface. Unlike some top gaming models, no additional heat sink is provided. At the front there is a sticker with the name of the model, under which there are four Toshiba flash chips. Next there is a controller, also Toshiba. And a little to the right - a DRAM cache chip. According to Google - produced by Samsung.

On the back side there is another similar DRAM module and exactly the same four Toshiba flash chips. They are covered with a sticker with technical information:

The drive is absolutely standard in form factor and thickness, so it will fit into any ultrabook or PC without any problems. The only issue left is heating.

How does Kioxia Exceria Plus perform?

Kioxia Exceria Plus SSDs are available in 500GB, 1TB and 2TB capacity. They use 96-layer 3D NAND TLC BiCS flash chips from Toshiba. As mentioned above, an 8-channel Toshiba TC58NC1201GST-00-BB brand controller is used. And DRAM-cache is represented by two Samsung DDR4-266 MHz chips, 4Gb each. You can expect MTBF (Mean Time Between Failure) of 1,500,000 hours and TBW (Total Bytes Written) of 400 TB for the 1TB model under test. It’s not a new record, but quite an impressive figure. The manufacturer gives 5 years of warranty for its drives.

The manufacturer has announced a read speed of up to 3400 MB/s and write speed of up to 3200 MB/s, the number of random 4KB file read and write operations up to 680,000 IOPS and 620,000 IOPS. Of course, the maximum speed is achieved through SLC caching: a small amount of memory runs in SLC mode to increase the speed. As soon as it runs out, the speed is significantly reduced. We used a stationary PC with Ryzen 3 2200G and Gigabyte GA-AB350-Gaming 3 motherboard as a test-stand. As synthetic tests have shown, the drive mostly demonstrates the stated performance. CrystalDiskMark has shown the maximum read speed just above 3400 MB/s, and write speed just below 3200 MB/s. In ATTO Disk Benchmark, the maximum read speed reached 3210 MB/sec and the maximum write speed was 2930 MB/sec, while AS SSD reached 2920 MB/sec and the maximum write speed was 2630 MB/sec. Anvil's Storage showed a bit lower, but still quite decent results.

The linear write test in AIDA64 shows that the volume of SLC-cache is about 30-40 GB, after which there is a drawdown. However, the write speed doesn't drop below 900+MB/s until the drive is full and on average stays around 1200MB/s. This is a good index, as on more affordable models the speed can drop below 200 MB/sec.

After the above described write process we measured the drive temperature inside our test PC and it was 28 °C. Of course, in some laptops with limited space the temperature will be significantly higher, but there are no preconditions for overheating.

What are Kioxia software features?

The company software has a corny name - Kioxia SSD Utility. The functionality is roughly the same as other similar applications: it displays all current information about the drive, free memory left, remaining lifespan. There's a built-in performance test, the ability to back up storage space, firmware upgrades, and more.

Reasons to Buy or Not to Buy Kioxia Exceria Plus 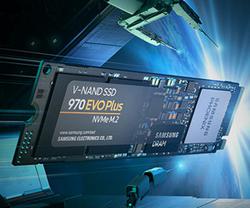 Samsung 970 EVO Plus was one of the first SSD with 9x-layer 3D V-NAND memory. Compared to the previous generation, Samsung has achieved significant growth in performance and power efficiency. The speed is close to the limits of PCI Express 3.0 x4, and even when SLC cache is full, it sometimes exceeds 1500 MB/s. In addition to benchmarking, Magician software allows you to manage the hardware encryption function. You can also download a Samsung driver to improve performance. The 970 EVO Plus copes well with heavy loads and is highly reliable.

Kioxia Exceria Plus VS Samsung 970 EVO Plus 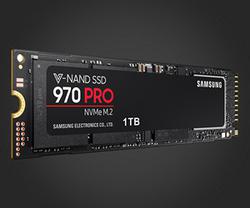 Samsung ditched from the fast 2-bit MLC flash for its new flagship 980 PRO. So, if you need better sequential writing performance, the 970 PRO, which is its predecessor, will be an excellent choice. Samsung 970 PRO can write at high speed (2,000+ MB/s) across almost the entire drive space. This may be useful for video editing and other creative work. You also get the option of hardware encryption and the Magician drive-management software. One more reason to choose Samsung 970 PRO is its high write endurance rating at 1200 TBW. Most of other popular models offer only 400-600 TBW for the same capacity.

Kioxia Exceria Plus VS Samsung 970 PRO 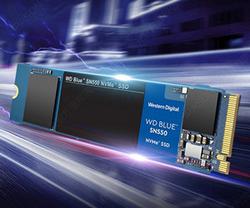 Compared to the top drives, WD Blue SN550 has lost DRAM and acquired a small SLC cache. But in its price range it easily beat its major competitors. When the cache is exhausted, write speeds drop from 2,000 MB/s to 850-880 MB/s, which is not bad at all. SN550 shows excellent results in game launch tests. Its performance is more than enough for the average user. Under normal conditions the temperature of controller and NAND flash chips does not reach 70 degrees after which thermal throttling should be kicked in. The 5 year warranty is also a nice surprise. This is still a rare thing for affordable devices. 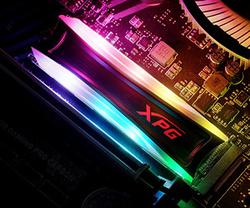 The XPG Spectrix S40G's feature is RGB backlighting (no wires required). You can customize the backlighting in the XPG RGB application and switch between different profiles. Compatibility with motherboard software such as MSI Mystic Light and ASrock Polychrome etc. is also stated. However, users have complained about problems with ASUS Aura Sync. The drive comes with hardware encryption support. Due to large SLC cache it can support high write speed for a long time, but in some scenarios performance is not as stellar. It's not the fastest SSD but if you are looking to add extra flair to your gaming rig, S40G is worth considering.

Three things you should know about Kioxia Exceria Plus: