There are at least three noteworthy PC games coming out in the first quarter of 2023. Forspoken, a Square Enix action game where a girl has to fight monsters with magic, opens the new gamer season. It will be followed by Hogwarts Legacy - an open-world role-playing game in the Harry Potter universe, but a hundred years before the events of the book. Finally, Company of Heroes 3, a historical tactical strategy game on the western front of World War II. All three games with modern graphics, and therefore demanding on the power of the processor and video card. It's time to upgrade your old PC or build a brand new one. The smart choice would be the latest Core i5-13600KF processor and a video card, on the contrary, the last generation GeForce RTX 3070 Ti, which is on sale now at a discount.

Reasons to buy: 20 CPU threads, unlocked multiplier.
Reasons not to buy: No iGPU and Box cooler.

The Intel Core i5-13600KF is an update to perhaps the most popular processor line among gamers. The switch from Alder Lake to Raptor Lake architecture did not bring a big performance increase per core, but the number of cores increased. Now, in addition to six powerful cores, each of which is capable of processing two data streams, eight more energy efficient cores are available. Altogether we get 20 threads, while the predecessor 12600KF had two less.

Power efficient cores are used for background processes (antivirus, music player, chats) so that powerful cores can fully focus on the main working application or game. The indices K and F mean an unlocked multiplier and no integrated graphics card, respectively. True, you definitely need a motherboard on a top-of-the-line Z690 or Z790 chipset for multiplier overclocking. Also you need a tower super cooler or a watercooler, because box cooler Intel Laminar usually does not come with K-processors. 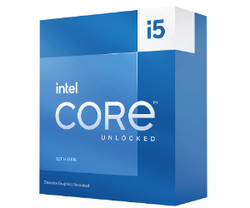 The Xilence M906 (another name XC081) is a tower type air supercooler. Traditionally supercoolers are called coolers with a heat dissipation of more than 200W. But Xilence's creation is able to remove not much more than 250 Watts. This is more than enough for almost any modern CPU, even with an unblocked power limit. It is a single very wide asymmetric tower, which is removed from the DIMM slots so as not to interfere with the installation of RAM modules.

And to not conflict with the motherboard VRM heatsink, a slot is made in the tower. The cooler weighs more than 900 grams and its height is only 154 mm, so it fits even into an inexpensive computer case. The included fan has a diameter of 12 cm and is built on a durable hydrodynamic FDB bearing. There are six heat pipes, and the copper is protected against corrosion with black paint. The contact with the processor is through a heat distribution plate, which especially helps in the case of an architecture of several chips.

Patriot Viper Venom DDR5 is a new generation DDR5 series of RAM. Runs at one and a half to two times the frequency of DDR4, but the actual increase in bandwidth is lower. The fact is that with increasing frequency inevitably increases and timing, that is, delays. The Viper Venom series includes paired sets of 16 to 64 GB total capacity, with frequencies ranging from 5200 to 7400 MHz. The junior models support both AMD Expo and Intel XMP auto overclocking technologies, while the senior models only support the latter.

The 2x16 GB set with 5600 MHz is probably optimal in terms of price to performance ratio. There are variants both with and without RGB backlighting, the second is a bit cheaper. Beneath the thick-walled aluminum radiators are chips made by Hynix. Now these are the most common DDR5 chips, for them you can easily find detailed instructions on manual optimization of primary, secondary and tertiary timings on the Internet. Factory formula for timings is CL40-40-40-76 at 1.25V supply voltage. 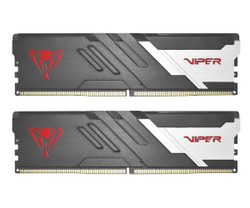 The ASRock B760 Pro RS is a motherboard with the LGA 1700 socket, that is designed for Intel Core 12 and 13 generation processors. B760 chipset allows you to officially overclock the DDR5 RAM to a frequency of 7200 MHz. And also unofficially overclock the CPU, but not a multiplier, and the bus. To do this, the motherboard must have a separate clock. The power supply subsystem consists of 10+1+1 phases for the CPU cores, integrated graphics card and RAM controller respectively.

The VRMs are covered by large heatsinks, as is one of the SSD M.2 slots. SSDs are supported with a PCIe 4.0 bus, but the discrete graphics card is already PCIe 5.0. True, these do not exist in nature yet, but there is room for future upgrades. Sound 7.1 channel card and 2.5 Gigabit Ethernet networking are represented by Realtek chips. Video outputs are digital HDMI and Display Port, and there are three fast USB 3.2 Gen2 ports: the classic Type-A, the newfangled Type-C, and an internal port for the front panel of the PC case.

The ADATA Falcon is an inexpensive yet stylish-looking M.2 NVMe SSD that runs on the PCIe 3.0 x4 bus, making it compatible with desktop and notebook PCs, including slim ultrabooks. It has sequential read and write speeds of up to 3,100MB/s and 1,500MB/s, respectively. Smaller files are handled at up to 180,000 IOPS (input/output operations per second). Flash memory is used multilayer 3D, which has a positive effect on its capacity.

The controller is RTS5762DL from Realtek. This brand is known primarily as a manufacturer of sound and network chips, but gradually gaining market SSD. SLC Caching and HMB technologies are supported to increase the performance of the drive. And LDPC and AES-256 for better privacy. To make sure the controller does not overheat, a thin aluminum radiator painted gold is used. Especially spectacular will look such SSD in a PC case with a transparent side wall. 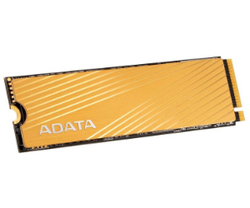 Reasons to buy: Three fans, enough power for QuadHD gaming.
Reasons not to buy: Does not support DLSS 3.

Inno3D RTX 3070 Ti X3 OC - nicely reduced in price due to the release of the new RTX 4070 Ti, the price of which on the contrary bites hard at the start of sales. It has 8 GB of GDDR6X memory and 6144 unified Ampere architecture microcore. Additional second-generation RT cores and third-generation tensor cores are also present. Recall that the countdown of tensor cores began with NVIDIA Volta server graphics cards.

Inno3D X3 OC version has two-slot design with three 9 cm fans, backplate attached. The length of the video card is 30 cm, but it's still a lot less than RTX4000-series models, which can reach 40 cm. There are six heat pipes, two of them cool the memory chips, which at 19GHz really get hot. PCIe 4.0 x16 connection slot, 8+8-pin power connectors. OC index means light factory overclocking of the core. To experiment with further manual overclocking you can use Inno3D TuneIT application. 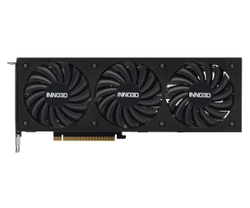 The Chieftec Core BBS-700S is a 700W power supply in a compact case that is only 14cm long, and is 80 PLUS Gold certified for energy efficiency. That is, the efficiency factor is 92%. Like most other Chieftec PSUs, it is built on the CWT platform with Active PFC reactive power correction and separate DC-DC stabilization. The main +12V line outputs 58A, which is equal to one hundred percent of the manufacturer's claimed power.

If there were two +12V sublines, separately for the CPU and the graphics card, a powerful GPU might not have enough power. The wires are not modular but have a solid 18 AWG section and are very long - 65 cm for the CPU, the graphics card and the motherboard. This allows them to be hidden behind the back of the PC case. Yate Loon fan with a diameter of 12 cm is very quiet, but the most common rolling bearing. Chieftec Core is able to work at the input voltage from 100 to 240 V, thanks to which it can cope even with severe sagging in the domestic mains.

Reasons to buy: Two 20cm and two more 12cm fans, glass side panel.
Reasons not to buy: If you're a mini-PC fan.

The Cooler Master HAF 500 is a roomy computer case with through-blowing. Behind the mesh front panel are two giant 20 cm ARGB backlit fans. They are controlled by the included hub which synchronizes with the motherboard. Also two more 12 cm swirlers are preinstalled: the first one blows out the back and the second one is aimed at the video card. Its angle can be adjusted up to 41cm depending on the length of your graphics card.

The side panel is made of scratch-resistant tempered glass and attaches without screws. You can also remove the top panel completely and install a 360mm water cooling system conveniently. You can mount the same on the front if you want, but it would be a shame to give up the cool standard fans. There are two chassis colors to choose from - black and white. And unlike budget solutions, it is white not only outside but also inside. And on the interface panel there is a modern coupled audio jack and high-speed USB Type-C 3.2 Gen 2 port. 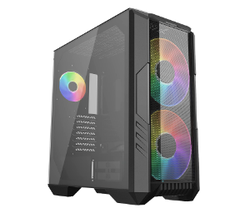