More business and less noise. This is roughly how we can characterize the Ugreen HiTune X6 model. We have already seen the previous model X5 (here is its review), there our attention was attracted by an interesting shape and availability of aptX codec. In the sixth model it is absent, but there is an active noise cancelling. Six microphones, business appearance, good design. And a relatively affordable price (the recommended retail price - $49.99, but on action you can find even cheaper). It's hard to classify Ugreen as a specialized audio brand, but they do make good "consumables", so if you like this shape, you can safely look in the direction of the HiTune X6. As usual, there are important little things, I'll tell you more about them.
Juicy Bass 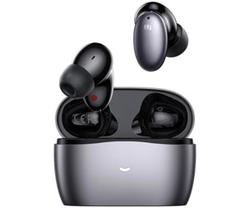 Ugreen HiTune X6 TWS headphones
TWS Headphones with Hybrid Active Noise Canceling
Affordable TWS headphones with hybrid active noise cancellation (but no transparency mode). They look strict, stand out with an unusual shape, have a game mode with minimal sound delays and an advanced touch control system. ACP does not work as efficiently as we would like and there is not enough aptX support, but lovers of rich bass will like the sound.
Read Verified Customer Reviews

In the box we were put headphones in a charging box and a charging cable USB-C, there are also two interchangeable sets of ear cushions: small and large. The third, middle one, is already installed in the headphones. There is a printed manual and a safety guide. It is convenient that on the cardboard lid of the box there is a memo on how to operate the headphones. You don't have to dig through the manual to figure out all the taps, I'll tell you about them in detail next.

The Ugreen HiTune X6 has the same form factor as the X5. They don't completely fit in your earbuds, but they don't have separate protruding "legs" either. I can't say whether this is good or bad, it's more a matter of personal preference.

The headphones themselves, like the charging box, are black and gray. The outer gray surface is matte and hides the touch button underneath. The rest of the case is made of black glossy plastic. By the way, there is no noticeable blue LED on it, which is hidden in the upper part of each headphone. It blinks only at the moment of connection and apparently is not used for anything else.

On the other hand, the charging box is completely matte on the outside, only the headphone cradles and the Ugreen logo on the top cover are covered with gloss. Unlike the HiTune X5, the charging port is not on the bottom, but on the back side of the charging box, so it can be charged "standing up". There is also a round button to activate the connection mode. On the front panel is a status LED, resembling a smiley face. In general, the strict black and gray color scheme suggests a business, "professional" application. But up to the real "business class" in the tactile part is a little lacking: the cover of the charging box has a small backlash.

How to connect and configure?

The HiTune X6 uses a standard Bluetooth connection mechanism. When you open the charging box, the headphones are ready to connect through the list of available devices on your smartphone or other audio source. Alternatively, pressing a button on the back that forcibly activates "pairing" mode. No additional software is required. However, there is none.

How are they controlled?

There is a separate memo about HiTune X6 control, placed in the most prominent place inside the box. It is as smart as in the already familiar X5, but there is one more gesture that is responsible for activation of noise reduction. ACS is turned on or off by a long (but not very long, about one second) touch of either headphone. An even longer (already two seconds) touch brings up your smartphone voice assistant. Exactly the same gesture can reject an incoming call, it's handy. And to answer it, all you have to do is tap either earpiece once.

Double taps on the left and right earbuds are used to decrease and increase volume, respectively. Triple taps on the same principle allow you to switch to the previous and next track. There is even a quadruple tap. It can be performed on any of the headphones, and it turns on and off the game mode with a reduced delay.

Mastering this gesture system is easier than it might seem at first glance. The most controversial thing about it is the one-touch gesture. On the one hand, it is very convenient, but on the other hand, it is fraught with false positives when trying to correct the earpiece. Again, this is a matter of habit: who is more comfortable? There is no in-ear location sensor here, and the pause does not automatically activate when you take the earpiece out.

On the whole, nothing unusual, but there are points worth paying attention to. The intricate control system is complemented by voice prompts that help you better understand what is going on. The headphones say "Power On" when turned on, and "Bluetooth Connected" when connected to a wireless signal source. Enabling or disabling active noise cancellation is accompanied by "ANC On" and "ANC Off" prompts, respectively.

About the noise cancelling we should tell separately. Despite the low price of the device, it is really present here and there are separate microphones for it mentioned above. Since the microphones are located both on the inside and on the outside of the headphone, the system of noise suppression is called "hybrid", it should provide its higher efficiency. In practice, however, the estimate of 35-40 dB of noise compensation seemed to me a bit excessive. In reality, the effect of the ACP system is certainly there, but it is noticeably inferior to the headphones from higher price ranges. If you need a real "noisekiller", don't expect to make do with $40. But otherwise the noisekiller works, it's better with it than without it, and it was really lacking in the HiTune X5.

What about battery life?

When taken out of the box, the headphones can last up to six hours. Recharging from the battery installed in the box can extend their battery life to 26 hours. You can not assess the level of charge of the box itself, the manufacturer abandoned the previously used three-step indicator. In this model, it has been replaced by a "smiley face" LED that begins to glow red when it is time to charge the box and pulsates white when the headphones installed in the box are being charged. Fully charging the box takes about two hours. It uses the modern USB-C interface, but we have not yet been offered wireless charging for such a price.

How do they sound?

For sound are responsible standard in headphones of this type of 10-mm drivers. Both in terms of price range and class (inexpensive headphones with ACP), the HiTune X6 is very similar to the HiTune T3, the more obvious a direct sound comparison between the two models. And here the X6 is unambiguously brighter. The midrange is not as expressive, but the bass, as well as the treble, sounds juicier, more emotional. Taking into account that this is a model for household everyday use, it is quite interesting. The game mode with reduced delay (the one that turns on by quadruple tapping) noticeably reduces the sound quality, but somehow radically does not affect the delays. This is probably because these delays are not noticeable in general. Perhaps in some hardcore game scenarios you might encounter them, then this mode will help you.

How handy are they?

Do you know how to check the TWS headphones fit? Try having a fun call with them, at least for 15 minutes. Yes, exactly fun, you need to talk a lot, smile and laugh. Such characteristic facial expressions and corresponding movements of muscles and skin can lead to displacement of the headphones, after which they have to be corrected. Everyone's ears are different, so certain models (and even with different sized ear cushions) may suit you to a greater or lesser extent. I would rate the comfort of using the HiTune X6 as "above average". The headphones are lightweight and fit well in your ears. However, their shape does take some getting used to if you've used headphones of a different design before. 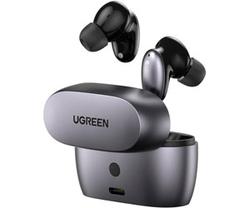 If the Ugreen HiTune X5 featured the Apt-X codec, but it lacked noise cancellation, the X6 model is the opposite. Noise cancellation is there, but Apt-X is not. In addition, the noise reduction itself is inferior in efficiency to more advanced models and for some reason does not have a transparency mode, provided even in the junior HiTune T3 model (here is their review). But the design and shape of the X6 can be an important argument in their favor.

Three things to know about the Ugreen HiTune X6: 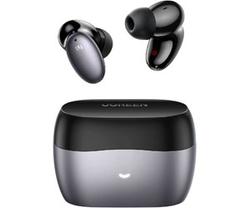