Even after the launch of Ryzen 7000, the desktop processors of the previous 5000-series did not turn into a pumpkin at all (the 6000-series is only used in laptops). On the contrary, after official price correction from AMD, Ryzen 5 5600G became even more profitable. In addition to the 6 physical cores of Zen 3 architecture and 12 virtual SMT threads, it also has one of the most powerful integrated graphics card Radeon Vega 7. Even the Ryzen 7000 embedded with the newer RDNA 2 architecture is weaker. It turns out that the 5600G is a self-sufficient CPU both for building a PC without a discrete graphics card, and with the potential for future upgrade with this very graphics card. 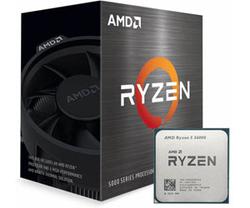 AMD Ryzen 5 5600G
Self-contained processor for building an entry-level gaming PC
A processor with a large, even by modern standards, number of physical cores and virtual threads - 6/12. An integrated graphics card is similar in performance to a discrete price of half that processor. A bonus is a small, but surprisingly quiet, at least under office load, cooler.
Current price on Amazon

How is it different from other Ryzen?

In the range of processors AMD Ryzen 5 5600G takes an intermediate place between 5500 and 5600. The first, the Ryzen 5 5500, is a bit cheaper, lacks integrated graphics, but in terms of processor part is completely the same as the 5600G. The second one, Ryzen 5 5600, on the contrary is a bit more expensive, also without iGPU, but with fast PCIe 4.0 bus support and bigger 32 MB cache. But 5600G has something to answer to: it has smaller cache size but faster dual channel 8+8MB cache.

Besides 5600G is cooler than 5600, there are two reasons for that. Less aggressive overclocking algorithm Precision Boost: the processor does not try to squeeze out an extra hundred megahertz by excessive voltage increase. And the single-chip rather than chip structure - the heat is transferred more evenly to the processor cover, and from it to the cooler soleplate. Heat dissipation is claimed to be 65 W, and it can be lowered in the BIOS settings to 45 W. There are two power saving modes to choose from: with a priority on the processor cores or on the integrated graphics.

What can the integrated graphics module do?

A separate story deserves a video card integrated into the Ryzen 5 5600G - Radeon Vega 7. This is the last fifth iteration of the GCN architecture, and the number of graphics microcore clusters is seven (and a total of 448 microcore). In older and more expensive proces 5700G there are eight clusters of integrated graphics, and old Ryzen 5 2400G and 3400G have eleven of them. But the frequency of their graphics is a third lower. It turns out that Vega 7 is almost the most powerful embedded graphics, and in terms of the cost of the processor - definitely the most profitable.

It supports smart upscaling FidelityFX Super Resolution 2.1, which allows you to increase frame rate by reducing the resolution of textures and then smoothing them. If the game is old and the developers were too lazy to add FSR to it after the release, you can use the alternative technology Radeon Image Sharpening. It produces a little less clear picture, but it works at the level of the driver on top of any game. Fans of eSports games such as CSGO and Dota 2, which are the main target of iGPUs, will definitely appreciate the Radeon Anti-Lag technology which reduces the input lag.

What kind of motherboard and memory do you need?

To test the Ryzen 5 5600G, we modeled a budget PC configuration, which is likely to be assembled by an average buyer. The stock of B450 motherboards is gradually running out, so we chose the A520 chipset. It does not support overclocking of processor cores and iGPU (with a compact boxy cooler overclocking would not work anyway), but perfectly overclocks RAM. And it is more likely to run the 5600G, as they say, out of the box, without the need to update the BIOS firmware on the previous generation processor.

Two budget 3200 MHz RAM modules easily overclocked up to 3600 MHz, albeit only with CL26 autotimings. For Radeon Vega 7 integrated graphics card high RAM frequency is much more important than low timings (delays). And it is the limitation of budget memory modules, the CPU itself can overclock RAM up to 4266 MHz. The main thing that the memory modules was a pair number to activate dual-channel mode 64+64-bit. By the way, iGPU is used not only for games, but also for smooth video playback with VP9 (used on YouTube), H264 and H265 codecs. And also for streaming and editing the latter two.

What are the results in benchmarks?

The smart Precision Boost algorithm is focused on processor temperature. Once it exceeds 90 degrees Celsius, the auto overclock decreases by a hundred or two megahertz. But even so the processor is boosted above 4 GHz for all cores. Thanks to the progressive Zen 3 architecture, Ryzen 5 5600G achieves over 600 points in the single threaded CPU-Z benchmark. A couple of years ago 500 points was considered a good result. However, Ryzen 7000 with Zen 4 architecture gives 700+ points, but at much higher TDP.

In terms of performance, power consumption and heat dissipation, Zen 3 turned out to be very successful. When loading only the processor cores, without the iGPU, the processor stays at a moderate 40W. This is the level of past generations of processors with 4 cores and 8 threads, while the 5600G already has a 6-12 configuration. Built-in graphics consume about 25 more watts, which is comparable to a discrete GeForce GT 1030, which costs more than half the price of the processor. And if in old games on the engine DirectX 11 between integration and discrete parity, in newer games on DX12 and especially Vulkan wins with a 30% margin Vega 7. 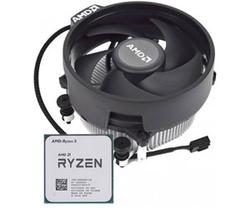 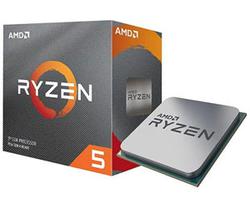