Air coolers are more compact, easier to install and maintain, and simply cheaper. But still, their heat dissipation capabilities are severely limited - 200, well, maybe 220 watts. Even in smartphones and gaming laptops, manufacturers are experimenting with liquid cooling (although there is not a water block, but the so-called evaporation chamber). And in desktop PCs, especially powerful gaming and professional-working ones, the liquid or, in common parlance, water cooling system reduces the temperature of the processor by 10 degrees and adds 10 points of charisma. There are five main sizes of water blocks: 120, 240, 280, 360 and more recently 420 m (one, two and three fans, respectively). The heat dissipation efficiency can reach 350W. In addition, CBOs are divided into closed-type factory ones, into which the refrigerant liquid was initially charged, and custom ones, which need to be assembled from pipes and fittings, like a seasoned plumber.

When the tower does not fit 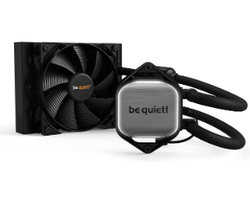 be quiet! Pure Loop 120mm is a German liquid cooling system of the most compact single-section 120mm size. Designed primarily for building a PC in a miniature case, which does not fit either a larger two-section LSS or a tall air tower. Long flexible tubes in a protective braid allow you to organize a neat cable management.

In order not to be much inferior in terms of heat removal efficiency to larger relatives, the Pure Loop 120mm pump is forced to pump refrigerant one and a half times faster - up to 5500 rpm. But thanks to the double soundproofing of the pump, there is no acoustic discomfort. The outer cover of the apomp is decorated with white illumination around the perimeter. The included 12cm Pure Wings 2 threaded bearing fan can run up to 2000rpm.

The whole structure together hums at an almost inaudible 19 decibels at 50 percent rotational speed, and a still moderate 36 dB at 100 percent. The inner sole of the pump, which is in contact with the processor, is not made of copper, like most other LSSs, but is plated with nickel, which allows you to use not only thermal paste, but also liquid metal. There is a hole for topping up the refrigerant, which after several years of operation may partially evaporate.

Reasons to buy: Compact size 120 mm, double noise isolation of the pump, quiet fan with threaded bearing, nickel-plated sole.
Reasons not to buy: In terms of efficiency, it is no better than an air tower. 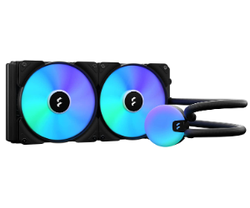 Fractal Design Lumen S28 - perhaps the most balanced dropsy size is 280 millimeters. In terms of heat dissipation area, it is much closer to 360 mm than to 240. And there is no need for a very long or tall computer case. But a protrusion on top of the case is still desirable, otherwise the LSS fans may rest against the VRM of the motherboard.

The Fractal Design Lumen S28 uses branded Aspect 14 PWM turntables with threaded bearings and without illumination (a version of the LSS with luminous propellers is also sold). Their rotation speed varies from 500 to 1700 rpm, and the noise level - from 10 to 35 dB, respectively. Uptime is claimed to be 90,000 hours. But the pump bearing will last half as long - only 40 thousand hours. Fortunately, it is ceramic, which means it is not subject to corrosion.

The translucent pump cover is decorated with six addressable ARGB LEDs, which can be configured separately. In addition, the cover can be rotated 90 degrees so that the manufacturer's logo is displayed smoothly, regardless of the direction of the tubes. The length of the hoses is 40 cm, which is enough for both the top and front radiators. Thermal paste from the factory is applied to the sole of the pump - exactly as much as is needed for one installation. 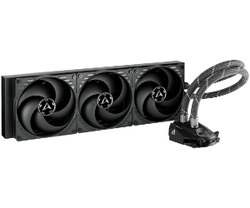 The Arctic Liquid Freezer II 420 is the largest possible closed water cooling system at 420mm. Cooled by three 14cm Arctic P14 PWM fans with durable FDB bearings. The turntables start from a record low 200 rpm and smoothly accelerate to 1700. And the pump does not have a fixed high pumping speed, like in budget CBOs, but is adjustable within 800 - 2000 RPM.

The icing on the cake was the so-called VRM Fan - a small, only 4 cm in diameter, propeller on a pump that cools the power circuits of the motherboard on top and on the side of the processor socket. According to the manufacturer, this reduces the temperature of the mosfets by about 15 degrees and allows the long-term Intel Velocity Boost auto-overclocking functions to fully work even on mainstream motherboards.

The disadvantage of the 420mm CBO is its incompatibility with the vast majority of computer cases. But little by little, suitable cases still appear on sale. In addition, the Liquid Freezer II series also includes more compact "dropsy", including those with 12-volt RGB and 5-volt ARGB-backlight. The kit comes with the famous Arctic MX-5 thermal paste, and the CBO itself is given the longest 6-year warranty on the market. 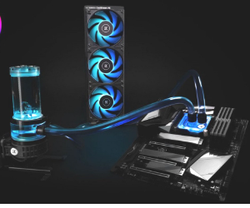 EKWB EK-Quantum Power Kit D-RGB P360 is a basic kit for building a custom cooling system with your own hands. It includes everything you need to cool the processor, and additional spare parts for cooling also the video card are offered to be purchased separately. Fortunately, they are also available in the assortment of the Slovenian company EKWB.

The starter kit includes a nickel-plated EK-Velocity D-RGB water block that contacts the processor; 2m EK-DuraClear hose that can be cut into as many pieces as you need pump with transparent reservoir EK-Quantum Kinetic TBE 200 D5 PWM; heat-dissipating radiator EK-CoolStream PE 360 with three fans EK-Vardar EVO 120ER D-RGB with addressable illumination; and a couple of EK-Torque L-shaped fittings for neatly laying hoses around the perimeter of the PC case.

The EK-Loop Multi Allen Key and EK-Loop Soft Tube Cutter are designed to simplify installation. The assembled system is filled with EK-CryoFuel Clear Concentrate refrigerant, pre-colored with one of the dyes from the EK-CryoFuel Dye Pack. The backlight of the LSS is synced with motherboards from ASUS Aura, MSI Mystic, Gigabyte Fusion, ASRock Polychrome and most likely Biostar Vivid too.

Reasons to buy: Custom CPU LSS with graphics card expansion, three backlit fans, mounting tools included.
Reasons not to buy: Too tricky choice for the role of the first CBO.