By: Nickolay Polovinkin | 06.10.2021, 00:00
The Ugreen HiTune X5 costs less than $50. For that money you can get a nice and attractive TWS in-ear headphones with good sound and sophisticated control. You won't have the ability to adjust through a mobile app and no active noise cancellation. Competitors in this range are a dime a dozen, but aptX support and a useful mode for games with low sound latency make this product stand out from the bulk of similar in-ear headphones. 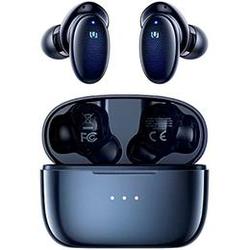 Ugreen HiTune X5
TWS earbuds with aptX support and low sound latency
TWS-headset with attractive look and quality sound, with support for Apt-X codec, and without ANC. It features an advanced control system with multi-touch buttons that understand many types of taps. The 10-mm drivers provide good sound with nicely expressed low frequencies. The earbuds don't have record-breaking, but sufficient battery life and basic IPX5 weather protection. There is a gaming mode with reduced latency.
Read Verified Customer Reviews

I became personally acquainted with the Ugreen brand about five years ago. But back in the year 2021, we have the HiTune X5, a vacuum TWS headphone with aptX support for less than 50 dollars. Some manufacturers are actively introducing noise cancellation. But here the developers have staked on the support of high-quality audio codec. Looking ahead I can say that for its price model is worthy, but not without compromises. Further you'll find a long read about what exactly we learned while examining HiTune X5 and to whom these earbuds will be suitable.

What's in the Box?

First of all, let me tell you about the box itself. It's very solid, you could even say gift-worthy. It's a strict black matte cardboard, the letters shimmering when you turn it. It looks more expensive than it costs.

The HiTune X5 looks quite interesting. The surface of the plastic charging box is glossy, but not very staining. The dark gray color with uneven texture resembles polished granite surface, and for some reason I want to describe the color itself as automotive "wet asphalt", although it is not exactly it. The shape of the box with a flat base allows you to put it vertically. In this case you will find the Ugreen logo on the top, three LED indicators on the front panel, a round pairing button on the back and USB-C connector for charging on the bottom.

Inside the box, the earbuds are held in place by magnets in the anatomically shaped slots. The lid is spring-loaded, it opens and closes nicely "with a door closer". The opening activates the LEDs, for a few seconds they show the current battery level.

The earbuds themselves are dark blue. They have an unusual shape: something between long styles with "legs" and designs that don't protrude from your ears. The HiTune X5 protrudes from your ears, but not too much. On the outer surface of each earphone there is a gradient pattern of dots and the logo in the shape of the letter U, above which there is a small LED.

On the inside, the right and left earbuds are labeled respectively. The charging contacts are located at the bottom of the protrusion, next to the microphone hole. The second such hole can be seen on the opposite side, that is, as far away as possible from the first. This is an additional microphone to improve the quality of voice transmission and eliminate noise.

How to connect and configure

Many of today's TWS headphones are able to recognize smartphones spectacularly when the box is opened. The HiTune X5 does this to the extent that it is possible for a versatile model. When you open the box next to your smartphone, no branded windows appear on the screen of the latter, of course, but the pairing mode is activated automatically, no buttons need to be pressed. If for some reason this does not work, then we connect them in the classic way: press the button on the back of the box, then find our device in the list of available devices on the smartphone or other device.

Sometimes we complain about the lack of controllability of TWS headphones. With Ugreen HiTune X5 the situation seems to be the opposite. They put everything possible on the two touch surfaces (one on each headphone). The main thing is not to get confused. So:

When a call comes in, all you have to do is tap either earpiece to accept the call. You can end the call with the same tap. But a long tap before the call starts allows you to reject the call. This is a useful feature that you won't find in all earbuds.

In addition, the one-touch gesture itself is an ambiguous gesture because of the frequent false triggers. You just adjust the earpiece, accidentally touch the touch surface, and - oops - you've sent an "off" to the person you were talking to on the phone at the time. A lot of models don't use the one-time press, I think that's the reason.

Well, shall we "go for a ride"? Well, in practice the earphones turned out to be pretty cool, their design proved to be quite well adapted to the control. The shape of the body allows to minimize the inappropriate triggering of a single touch, which I mentioned above. But four times touch is a little too much, it is not easy to get used to it. And there is not much of a need for it. Such a gesture turns on the game mode with a reduced (70 ms) sound latency. The transition to it is accompanied by the voice prompt "Gaming mode", and the exit, respectively, "Normal mode". In practice I did not notice any noticeable difference between the modes, but eager gamers will surely find it.

Audio prompts are a characteristic feature of the device. When you turn on the earbuds they say "Power on", and when connected they say "Bluetooth connected". They warn about low battery, switching to pairing mode, enabling game mode, and so on. In my opinion, it is more comfortable than just a beep, you better understand what is happening now.

However, there is no function to identify the earphone in the ear. When you take out one of the earbuds, you can not automatically pause music or video. The ability to work with two devices at the same time is also missing, although this feature is already rare.

To be honest, some of the functions of the LED indicators remained a mystery to me. Some time after returning the headsets to the box, one ( right) or two (right and left) LEDs blink slowly, it is not clear what they are indicating. I didn't find a description of this indication in the instruction, but it seems that the blinking of the left and right LEDs indicates the charging process of the headphones from the box. There is no color indication, the LEDs are always white.

The earphones are water resistant IPX5. In practice, it should protect from sweat, light rain and accidental splashes. This is normal, almost any model now has similar protection.

The earbuds can last up to 7 hours on one full charge when removed from the box. The charging box can fully power the earphones 4 times, thus bringing the total battery life up to 28 hours. This is an average value for headphones of this type. Note that, unlike many competing products, the HiTune X5 have not one, but three LEDs. Accordingly, they also work as an indicator of the charge level of the battery built into the box. When you open the lid, the number of lit LEDs shows the approximate charge level. Approximately 33% for each indicator. The accuracy is so-so, but still useful. Wireless charging is not provided. It takes about two hours to fully charge the built-in battery, but the headphones themselves can be charged in about 15 minutes for a full hour of work.

The HiTune X5 is designed to demonstrate the maximum sound quality for a 50-dollar headphone. I think they succeeded. The bass sounds very convincing, the bass is deep and clean, without rattle. The high frequencies sound bright, but the middle is subjectively a little lacking. As in most similar devices, the sound is reproduced by a 10 mm driver. If to single out one feature, which succeeded the best, I would call it the bass. In game mode the sound almost does not change, but if you want you can hear how the balance is slightly shifted to the high frequencies

By the way, speaking of sound quality, we should also remember about voice transmission through microphones. The headphones run on a chip Qualcomm QCC3040, which provides proprietary technology cVc to reduce echo and noise (ECNS). In reality, we can not say that the voice quality somehow drastically stands out from most other headphones, but it is generally quite high.

The unique shape allows the headsets to fit comfortably in your ears. The set comes with four sizes of interchangeable earpieces, so you can choose the most appropriate size for your particular ears. At the same time, I have a subjective feeling that these earbuds are easier to accidentally remove from my ears than other designs. They hold well, don't fall out, but they are somehow too easy to take out.

Ugreen HiTune X5
TWS earbuds with aptX support and low sound latency
TWS-headset with attractive look and quality sound, with support for Apt-X codec, and without ANC. It features an advanced control system with multi-touch buttons that understand many types of taps. The 10-mm drivers provide good sound with nicely expressed low frequencies. The earbuds don't have record-breaking, but sufficient battery life and basic IPX5 weather protection. There is a gaming mode with reduced latency.
Read Verified Customer Reviews