The Acer Predator Triton 300 SE is a great example of a versatile notebook that's suitable for both work and play. It boasts a compact and lightweight metal chassis with a stylish and quite discreet design. At the same time, inside it has very powerful hardware which is enough for all modern games, as well as for work with graphics and video. At the same time, the cooling system quite copes with its task, which is especially difficult, given the compact size. It has a high quality screen with a refresh rate of 144 Hz and a sufficient set of interfaces, including Thunderbolt 4 and HDMI 2.1. The minor complaints are the mediocre quality of the speakers and modest upgrade options. Which is to be expected given such dimensions and contents. 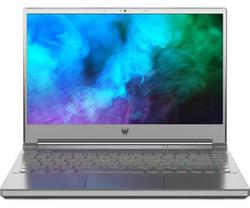 The packaging and package of the Acer Predator Triton 300 SE is absolutely standard. A big black cardboard box with the Predator gaming logo in it, including the notebook itself, a not-so-large 180W power supply, a detachable power cable, and documentation (it never made it to us).

How does it look and is it well assembled?

It's not always the case that you buy notebooks with high performance hardware just for playing games. And not all the gamers like ugly-eyed models with RGB-lighting in every possible way. And in recent years there have been a lot of models with gaming components inside, with restrained design and compact dimensions. The Acer Predator Triton 300 SE is one of these laptops. At first glance it is hard to tell at all that this is a gaming model. The case is made of silver metal, the backlight is only in the keyboard, and gives away the gaming nature, perhaps only a small neat logo gaming lineup Acer Predator in the upper right corner of the lid. Meanwhile the notebook looks very stylish and presentable. The top cover is matte and has a nice texture. Fingerprints are hardly visible on the top lid.

All the ports are located on the side edges of the notebook. On the left side there's a Kensington lock slot, ventilation holes, power supply socket, full-size USB Type-A 3.2 Gen2 (10Gb/s) and Type-C 3.2 Gen 2 with Thunderbolt 4 and DisplayPort support.

On the right side, there's a 3.5mm combo audio jack for headset connection, HDMI version 2.1, full-size USB Type-A 3.2 Gen 2 with power-off charging support and ventilation holes. The set of ports is quite sufficient for comfortable use.

On the back end, there are only a large number of vents that blow hot air out.

There are no functional elements on the front end of the notebook. Including any notches to open the lid. But it isn't necessary to open it, because it has a slightly wedge shape which makes it easy to lift.

On the bottom lid there's a solid rubberised band at the back and two wide feet at the front for stability. Plenty of air vents and speaker grilles. Triangular notations are a traditional part of Acer gaming notebooks: they indicate the notebook's hottest spots under load.

The bezels around the perimeter of the screen are quite thin. A webcam with microphones is located in its usual place, above the screen. Underneath the screen are the LED lights for charging and operating the notebook.

The notebook measures 323x228x17.9 mm and weighs 1.8 kg, so it's quite comfortable to carry around in a backpack every day. At the time of the emergence of ultrabooks as a class, there were certain criteria in terms of size and weight. The Acer Predator Triton 300 SE meets these criteria perfectly, with plenty of performance inside. In terms of quality of materials and assembly there are no questions: all parts fit well, the panels are practically undamped.

How comfortable is it to use?

The hinges of the Acer Predator Triton 300 SE allow you to open the notebook with one hand. The display locks well in the right positions and virtually no wobbling. The lid can be opened 180°, which is more than enough.

The keyboard layout is close to the standard ultraportable variants. That is, there is no additional number block. But there is additional buttons column on the right side. Here you can find the power button (upper right corner), below it - the button, which launches the proprietary Predator Sense software, as well as volume control and media content playback buttons. The mute button has a corresponding LED. Otherwise, everything is almost standard: a single-storey Enter, reduced in height top row of function keys and long Shift. But in this case the right Shift is shortened just a little, due to which the arrow keys are of standard height. All these small details don't influence the general usability of the keyboard significantly and you get used to it very quickly.

Key size and key spacing are standard, the stroke isn't the longest, but quite comfortable and informative. The backlight is RGB, which can be adjusted with Acer NitroSense software. There are three backlight zones and four brightness levels.

The touchpad is not the biggest, but it's sensitive and well coated. During working and web surfing there is no desire to use a mouse. In the upper left corner there is a small fingerprint scanner. The location is not the best, but as practice has shown, while using the touchpad it does not interfere at all.

How good is the display?

The Acer Predator Triton 300 SE has a 14-inch IPS display with 1920x1080 resolution, 144Hz refresh rate and a matte finish. The company doesn't put any particular emphasis on the screen in its promotional materials. But, in fact, it turned out to be very good both in terms of picture quality and viewing angles as well as brightness margin.

Colorimeter measurements showed that the maximum brightness is 327.455 cd/m². Quite an impressive figure for a gaming model. The blackfield brightness is 0.368 cd/m² and the static contrast ratio is 890:1. That said, the screen is very well calibrated. The color gamut is almost the same as sRGB, Gamma curve and RGB curves are almost exactly the same as the reference values. And the color error ΔE ranges from 1 to 4, which is very good.

What about performance, battery life and sound?

The Acer Predator Triton 300 SE uses Intel Core 11th generation processors Tiger Lake-H35. In our case, the Intel Core i7-11375H is installed. It is manufactured using 10nm SuperFin process technology, built on Willow Cove architecture, includes four cores and supports Hyper Threading 8 threads. The base frequency is 3.3GHz and Boost is 5.0GHz. The L3 cache is 12MB and the TDP can be up to 35W. The processor features Intel Iris Xe integrated graphics with 96 processing units and up to 1.35GHz. As a discrete accelerator we use NVIDIA GeForce RTX 3060 Laptop with 6GB of GDDR6 video memory, which is built on GA106 chip with 3840 compute blocks, 120 texture modules, 48 rasterization blocks, 120 tensor blocks and 30 RT cores involved. The GPU base frequency in our configuration is 817 MHz and Boost 1282 MHz. The situation with RAM in the laptop is interesting. 8 GB is unsoldered on the board and there is one slot for an additional card. In our case there is a 16 GB card installed, as a result we have 24 GB of DDR4-3200 running in dual channel mode. This is the maximum capacity for this notebook. Wireless interfaces: Intel Killer Wi-Fi 6 AX1650 adapter with 802.11ax and Bluetooth 5.1 support.

The laptop shows high results in synthetic tests. This is true for both the graphics subsystem, and the processor. There is some lagging behind only from octa-core models in multi-threaded tests. Although in single-threaded tests the processor is on top. Performance of the notebook is enough for both modern games, and to work with video or graphics.

. The 1TB Western Digital PC SN730 PCIe Gen3 x4 NVMe v1.4 SSD is used as storage in the notebook, with the declared read speed of up to 3400 MB/s and write speed up to 3100 MB/s. There is no additional SSD slot, so smaller capacity configurations for gaming may not be the best choice.

The test reveals that the actual speeds are in line with the claimed performance:

. For cooling the notebook's insides, a 5th generation AeroBlade 3D dual-fan cooling system with 89 thin, specially shaped blades and three heatpipes each is used. Air intake is from the bottom and top of the notebook, and blow out to the back and sides. But it's worth mentioning that even under prolonged peak loads the flow of hot air from the side holes is very small and doesn't fry your hand with the mouse. Stress-testing showed that under prolonged strain the insides may heat up to 90-93° and there's minimum trot-tling up to 7%. Although in real life tasks there are no performance problems: during a long game there is no noticeable FPS sagging or freezes.

All tested games were run with high graphics settings and ray tracing, where it is supported and DLSS. The results are very even sensible. In Control the framerate ranges from 60-75 FPS. Gears 5 has 70-85 FPS, Metro Exodus has 90-100 FPS, The Ascent has 50-60 FPS.

The built-in speakers in the notebook are rather mediocre, both in terms of volume and quality. All the same, the compact casing introduces certain limitations. For watching movies and videos they are enough. For music and when playing games it is better to connect headphones.

There is not so much software preinstalled. For the sound tuning the DTS-utility is provided.

The notebook is powered by a 60Wh 4-cell battery. It promises up to 10 hours of battery life. In "office" use with low brightness, working with documents, browser and a little Photoshop, the laptop survives about 6 hours. And that's a very good figure for a gaming model. 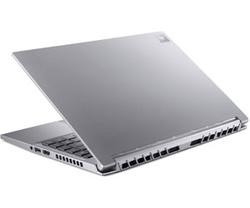 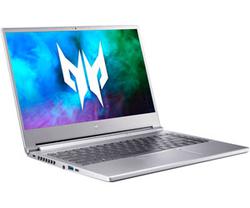