DxOMark experts have already managed to test Apple's new products and give scores to two models of the family - iPhone 13 Pro and iPhone 13 mini.

The older model received quite high scores according to test results: 144 for photo, 76 for zoom and 119 for video. An average score of 137 points allowed the smartphone to move up to 4th place in the overall DxOMark ranking. Meanwhile, the top three remained unchanged with Huawei P50 Pro at top, Xiaomi Mi 11 Ultra at second place and Huawei Mate 40 Pro+ at third. 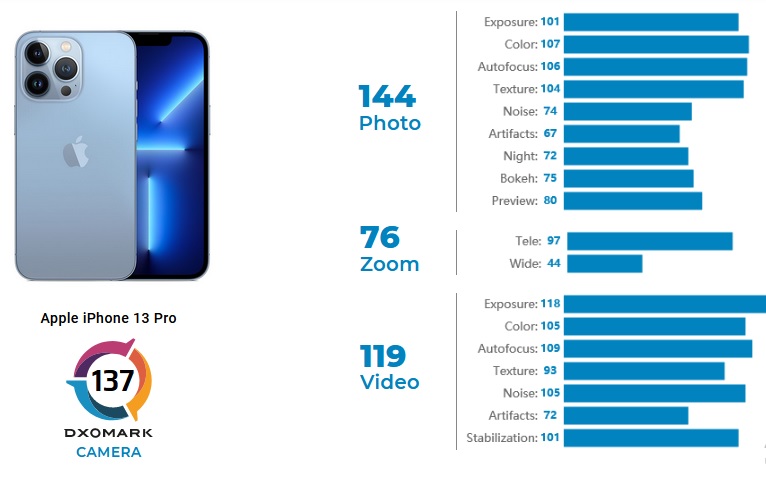 " Overall, it would be fair to say that Apple has managed to make the most of its imaging hardware, as most of the devices that rank higher in our ranking have higher resolution sensors in their primary cameras", - summarized by DxOMark.

The youngest model in the lineup appeared to be minimal only in size, but not in its capabilities. Its average score was 130: 138 for photos, 55 for zoom and 117 for video. And this secured the smartphone the 11th place in the DxOMark ranking. Exactly the same result was last year's iPhone 12 Pro Max. 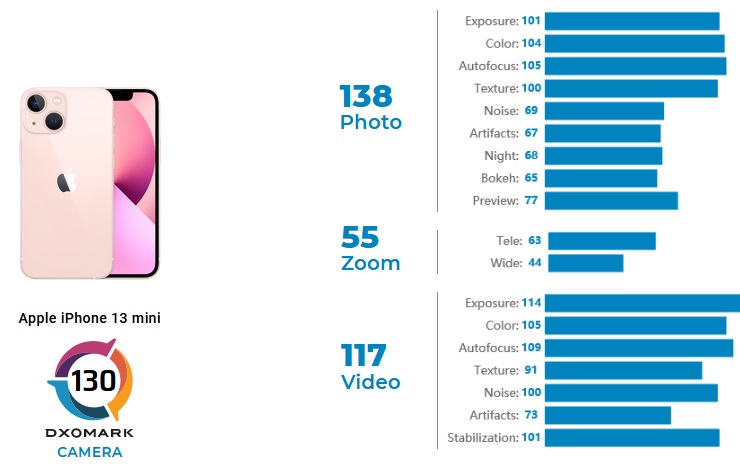 "The iPhone 13 mini scored 117 points, only two points lower than the 13 Pro, making it by far the best video option in the  segment and the second best option (along with the significantly more expensive Xiaomi Mi 11 Ultra). Video clips recorded with the device shows accurate and stable exposure, and also a wide dynamic range. Autofocus works accurately and provides smooth transitions, and video footage has a good compromise between texture and noise. Our testers observed some artifacts and noise, but overall the Apple iPhone 13 mini - a good recommendation for mobile video creators", - confident DxOMark.