Apple dominates: iPhone X - the most popular smartphone in the I quarter

Analysts at Strategy Analytics published the top 6 best-selling smartphones in the world in the first quarter of 2018. Apple devices took the first four lines of the rating, and at the top was expected to be the "frameless" iPhone X.

the hit of the season

According to experts, from January to March Apple shipped 16 million iPhone X, and the total sales of the smartphone from the November release are close to 50 million. Despite the high cost, the device is clearly ahead of the iPhone 8 (12.5 million) and even more iPhone 8 Plus (8.3 million). True, the iPhone 7 a year ago was sold even better (21.5 million). Actually, the model of the previous generation is still popular and takes the fourth line with a result of 5.3 million devices.

In the top five was squeezed into the budget of Xiaomi Redmi 5A, as this is one of the best offers for their money. The model is very popular in China and India (and we, too, just analysts drew attention to the largest markets). For three months the company supplied 5.4 million units.

The last in the top 6 was Samsung Galaxy S9 +. An excellent result, if we recall that the global launch of new flagships took place only in mid-March. In the second quarter, the Korean has every chance to become the most popular Android-smartphone on the market, if it does not outstrip the standard Galaxy S9. 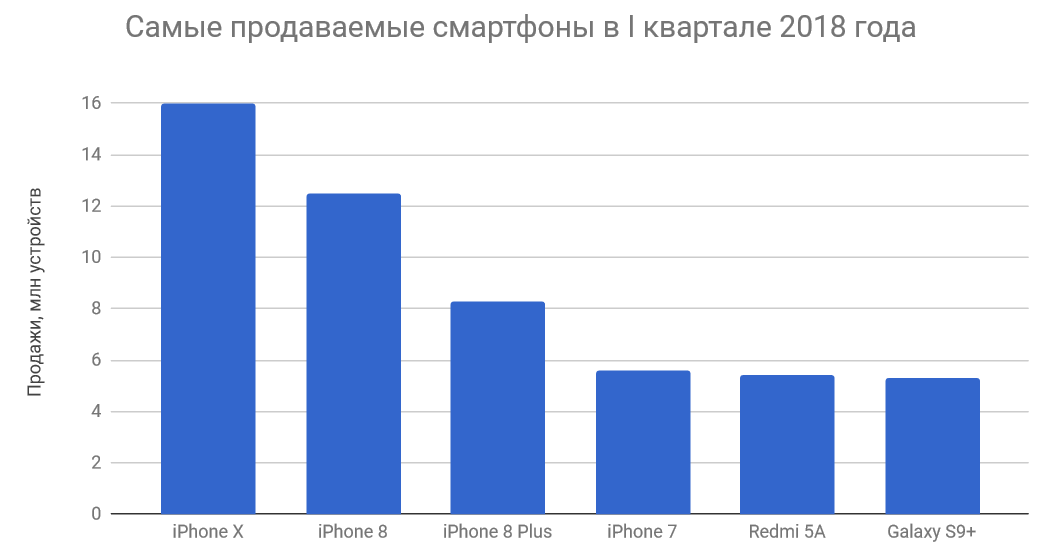 In Strategy Analytics recorded a decline in global sales of smartphones from 353.8 to 345.4 million units. Analysts IDC counted only 334.3 million devices in the first quarter. The difference is explained by different valuation methods for companies.