The Lenovo ThinkPad range of laptops is popular in the corporate segment. And the flagship model Lenovo ThinkPad X1 Carbon in particular. Lenovo decided to take quite the right approach: it makes no sense to make a sweeping change to a model that customers like and that sells. And the new generation offers exactly what you would expect from it. All the same recognizable simple and light body made of carbon fiber and magnesium alloy, red trackpoint, which remains the distinctive feature of the range for more than a decade and a very comfortable keyboard. At the same time, the insides are naturally upgraded, using more relevant processors of the 10th generation. However, this is still a laptop for office applications and web surfing, but not for heavy graphics work. The laptop has the maximum set of interfaces, including fast Wi-Fi 6, NFC, LTE-modem and wired Ethernet through the included adapter. The battery has enough capacity for a working day under light loads, and the screen is bright enough to work in most conditions. 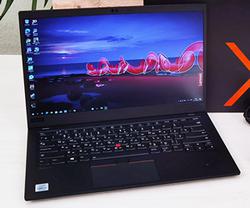 The Lenovo ThinkPad X1 Carbon 8th Gen is packaged in a double box. The outer one is made of recyclable, solid mustard-colored cardboard. And the laptop is in a smaller, well-presented black box. Inside, you will find the laptop itself, a compact 65W power supply, an Ethernet adapter, and documentation.

Lenovo prefers not to redesign well-known and popular models, so if you've seen the Lenovo ThinkPad X1 Carbon from the previous few years, the updated model will be familiar. It seems that in terms of configuration and layout of all functional elements, nothing has changed at all. The body is still made of magnesium alloy and carbon fiber, making the laptop lightweight, while being quite durable. The color is black with a soft touch coating. It looks and feels good, but instantly collects fingerprints. Branded distinctive features of the range in the form of red trackpoint and additional buttons above the touchpad are also present. A noticeable difference from the previous version is the X1 inscription on the top cover has moved from the lower right corner to the upper left corner, to the ThinkPad logo. This is where the visual differences end. The LED in the letter "i" remained.

As already written above, all the ports and other stuff are in the familiar places. A power button with LED indicator is on the right. It's a strange decision, considering that Lenovo ThinkPad X1 Carbon 8th Gen is not a transformer. Just behind it there is USB 3.2 Gen1 Type-A, air vents and a slot for Kensington Lock:

The left end has a pair of USB Type-C 3.2 Gen2 Thunderbolt 3, with an LED charging indicator in between. The second Type-C is in a joint compartment with a proprietary port to connect the included Ethernet adapter. This is made to connect original docking stations. Then there's another USB 3.2 Type-A, HDMI and a 3.5mm audio combo jack:

The hinges and the SIM card tray are on the back. Structurally, it is similar to smartphones. We had a configuration with LTE support, although there are versions without.

Similar to the 7th Gen model, the laptop is equipped with four microphones, placed on the end of the top cover:

The bezels on the sides of the screen are thin, while the top is a little wider. There is a LED indicator above the screen, an infrared camera for face detection and a webcam with a physical ThinkShutter cover.

A pair of additional speakers is installed above the keyboard.

In terms of dimensions and weight the laptop is the same as the previous version: 1.09 kg. It is compact, lightweight and it is not a problem to carry it with you all the time. The assembly is at an excellent level, the body is robust, the company mentions MIL-STD-810G certification. Although this does not mean that you can drop the laptop without any fear, but rather that it will be harder to destroy it than any normal laptop.

Is it convenient to use a laptop?

The hinges allow you to open the Lenovo ThinkPad X1 Carbon 8th Gen by 180°, and the laptop can be opened with one hand without any problems. The cover is fixed in the right position very well and does not start to wobble at the slightest touch. There is no notch on the lid, as usual for other laptops, but the conical shape makes up for it. The keyboard itself and the layout are similar to all ThinkPad for many years and fans of the range will not have to get used to. For those who plan to "move" from a laptop from another manufacturer, there will be a couple of surprises, although they are not too critical and getting used to it is quick. Separate Home, End and Delete buttons are placed at the end of the upper row, the block of arrows is slightly extended to the user, PgUp and PgDn are placed on the sides of the up arrow, and PrtSc was set between the right Alt and Ctrl buttons. But the most important thing is that the left Ctrl and Fn on the keyboard have swapped places, which is not very familiar: the left Ctrl is constantly used blindly.

But there is not much of a problem. You can swap them back with the original software. The buttons, typical of the series, are very comfortable to work with: they have a relatively soft, but palpable stroke. There is a white keypad backlight with two levels of brightness:

The screen diagonal of the laptop – 14 inches, different IPS panels are used. It can be FullHD with anti-glare coating or 4K 3840x2160 with HDR 400 and Dolby Vision support. Options with 2560x1440, as last year, are not yet available. At a glance, the screen is of good quality. Of course, the viewing angles are maximum, without color distortion and with a minimal drop in brightness. Maximum brightness is 331.822 cd/m², black field brightness is 0.349 cd/m², and the static contrast ratio is 951:1. The calibration on the other hand isn't bad, but it could be better (and it usually is in top-of-the-line ThinkPads). The color gamut is close to the sRGB color space, but the color reproduction goes a bit into the cooler shades:

What about performance, battery life and sound?

The Lenovo ThinkPad X1 Carbon product line is always designed for working with documents, browsing, and other non-complex tasks. Not for heavy graphics. The eighth generation continues this tradition. There is a rather modest in performance, but energy efficient 10th generation Intel Core i5-10210U processor from the Comet Lake family. It is made by 14nm process technology, includes 4 cores, supports 8 threads HyperThreading and is equipped with 6 MB Intel Smart Cache. It has a base clock speed of 1.6 GHz and Turbo Boost speed of up to 4.2 GHz. Intel UHD Graphics 620 is responsible for the graphics with up to 1100 MHz. Configurations with discrete graphics are not provided. RAM – 16 GB LPDDR3-2133, it is soldered to the board. Although for such a "business" solution 16 GB is quite enough. Wireless interfaces: Wi-Fi 802.11 ax (Wi-Fi 6), Bluetooth 5.0, NFC and 3G/4G LTE, so if you have a SIM-card you won't have to run from one Wi-Fi point to another. And with the included adapter you can also get connected over the wire.

The laptop demonstrates modest results in benchmarks, especially in graphics tests. This is not surprising, considering the layout. But the performance is enough if you use the laptop "as intended". With office applications everything is fine, Chrome with 30+ tabs doesn't slow down, and you can adjust brightness and contrast in Photoshop without any problems.

The cooling system works quietly. But, judging by the AIDA64 stress test, it does not really cope with peak loads. The first minutes the insides can heat up to 100°, of course, the processor resets frequencies, trotting reaches 42%. Further the cooling system adapts to the load, temperature varies from 70 to 90 °, the processor does not trot. In this case the body heat can be felt only above the keyboard, which does not affect the comfort of work in any way. Although in everyday life such loading simply does not happen.

The laptop is powered by a 51Wh three-cell battery, just like the last generation. Fast charging from the included power supply for 65 watts is supported: in an hour you can charge up to 80%, and a full charge takes about 1.5 hours. In office mode (browser with a bunch of tabs, files, Wi-Fi connection, low brightness of the screen), the laptop holds just over 8 hours. So for the working day (taking into account the lunch break) this should be enough.

The laptop has a sound system with four speakers: two main speakers on the bottom and two additional speakers above the keyboard. Of course, you should not expect the sound quality of a desktop computer speaker. But, as for an ultra-compact laptop, the sound turned out to be very good and loud.

To set up the laptop, use the original application Lenovo Vantage, which collected all the essentials: system monitoring, driver updates, BIOS, power settings, night mode screen and so on.

There is also a Glance app preinstalled. It tracks the eyes of the laptop owner, which allows to implement several useful functions: