A reliable power supply is the key to the health and longevity of all other computer components: processor, motherboard, video card, and especially disks. But drives are valuable not so much in themselves, but the information stored on them. A common cause of bad sectors on hard drives is just power surges supplied by the power supply. The generally accepted 80 PLUS (Bronze, Gold, Platinum, Titanium) energy efficiency certification, which means the efficiency of the PSU, is de jure not a guarantee of reliability, but de facto means that at least someone external has tested the PSU. Not a single manufacturer will dare to give a completely hacky model into the hands of testers. However, there are worthy PSUs even without the 80 PLUS certificate: either their efficiency does not reach the minimum allowable 80%, or the manufacturer simply decided to save on the certification procedure and, thereby, reduce the cost of the product. In addition to high efficiency, modular design is also important, that is, the ability to disconnect unused wires for a neater PC exterior. 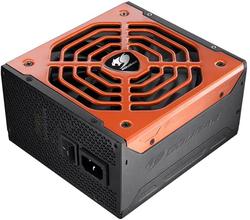 Cougar BXM700 - semi-modal power supplies are perhaps the most logical. As well as the 80 PLUS Bronze certification, which means up to 85 percent efficiency. The power cables for the processor and motherboard are fixed, because the user, one hundred percent, will use them. Even in the case of building a PC with an integrated graphics card, rather than a discrete one, and an M.2 SSD instead of 2.5-inch SATA.

The main 24-core motherboard power cable is covered with a nylon braid for greater neatness. The rest of the wires are made in the form of a flat, pliable noodle, which contributes to their hidden installation. The internal circuitry, traditionally for Cougar power supplies, is made by HEC (both brands belong to the same parent company Compucase). Capacitors are partly Taiwanese Teapo, partly Japanese Nippon - all without exception high-temperature 105 degrees.

The fan is used with an increased diameter of 14 cm manufactured by Poweryear based on a hydrodynamic bearing (up to 150,000 hours). With this in mind, the PSU received another respected certificate - the reliability of TUV Rheinland. In addition, the proprietary Cougar Xformer transformer heats up to only 40 degrees and guarantees voltage deviations of no more than 2.5 percent (with an allowable rate of up to 10 percent).

Not afraid of voltage fluctuations 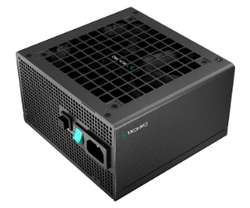 Deepcool PQ750M - given that power supplies with a silver certificate are almost never found on sale now, the next link in the evolution is 80 PLUS Gold with an efficiency of 92 percent. In addition, the device is able to work in household electrical networks from 110 to 230 volts. It would seem that in our area it is not in demand at all. But in fact, in rural areas, the voltage often sags up to 170 V.

The same 12-cm Hong Hua FDB fan, which does not rotate at all up to 30% of the load on the PSU. Hybrid or, in other words, semi-passive cooling can be disabled with a dedicated button on the PSU case. The same infinitely long 10 year warranty. At the same time, the Deepcool PQ750M costs significantly less than the Seasonic FOCUS of similar power, and is inferior to it only in the number of SATA and Molex cables. Fortunately, the modular design makes it easy to catch up if necessary. 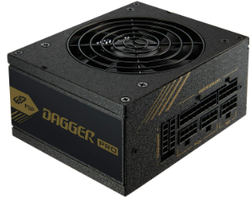 FSP Dagger Pro 650W is the most powerful power supply in the reduced SFX format (only the slightly enlarged SFX-L PSUs are more powerful). Designed to build a mini-computer in a cubic or thin case based on a Mini-ITX motherboard. Despite its miniature size, it is able to power even the flagship processor and video card. For this, a pair of 4-pin and the same number of 6 + 2-pin connectors are provided.

FSP own design and production circuitry with progressive separate DC-DC stabilization and the so-called Single Rail +12 V line. Uses exclusively Japanese capacitors, which results in 200+ thousand hours of uptime. The fan with a diameter of 9 centimeters up to 20% of the load on the PSU does not rotate at all, and up to 50% it rotates at almost inaudible speed. The rolling bearing is better than a conventional bushing, but worse in hydrodynamics.

The cables are made of soft ribbon, which is especially important when assembling an ultra-compact PC. But if over time you decide to relocate the computer to an already full-sized Midi-Tower case, then you won’t have to change the PSU - there is an adapter frame from SFX to ATX in the kit. The efficiency reaches 92%, for which the Dagger Pro 650W was deservedly awarded the 80 PLUS gold medal. 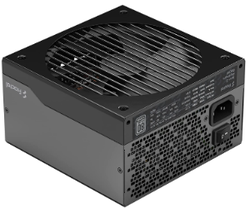 Fractal Design Ion+ 2 Platinum 860W is a power supply with the ability to connect two processors (two 4+4-pin connectors) and three flagship video cards (six 6+2-pin connectors). And 80 PLUS Platinum certification means 94 percent efficiency. Does not turn on the fan up to half of the maximum load on the PSU. The turntable uses the proprietary Fractal Design Dynamic 140 for 100+ thousand hours of uptime.

Inside the power supply, the High Power company's electronic platform and Japanese 105 degree Celsius capacitors are used. Cables are made in the form of flat pliable noodles, and belong to the elite UltraFlex category. The length of the most problematic processor cable for hidden pulling is more than sufficient 70 cm.

The solid line +12 volts, from which the processor and video card are powered, delivers 860 watts of power, which is equal to 100 percent of what the manufacturer claims. Another 120 W goes along the +5 and 3.3 V lines, that is, the total power of the PSU is even more than promised. All possible levels of electrical protection are implemented: from short circuit, overheating, overload and power surges. Given this, you won't have to worry about replacing the PSU for ten years, which is confirmed by the corresponding warranty.

No noise or dust at all 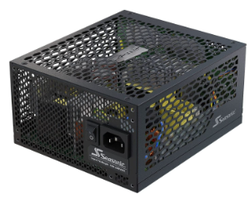 The Seasonic PRIME Fanless TX-700 is a heavily perforated power supply due to its completely passive, i.e. fanless, cooling. It is the most powerful fanless solution on the market and at the same time the most energy efficient - 80 PLUS Titanium with an efficiency of 96 percent. And the main thing here is minimizing not so much the consumption of electricity as the side heat.

If we compare two 700 W PSUs - the first Bronze 85%, and the second Titanium 96% - then at full load they will emit 105 and 28 W of heat, respectively. In the first case, it is not possible to cope without a fan, and in the second case, large passive radiators are not even needed. In addition, the Seasonic PRIME Fanless TX-700 has the industry's lowest output voltage tolerance of 0.5% and the longest warranty of 12 years.

In addition to completely passive cooling, the power supply is also completely modular, and the cable connectors are gold-plated to resist corrosion. In parallel with 80 PLUS Titanium, the PRIME Fanless TX-700 received another solid certificate - Cybenetics A ++ silence. Given the lack of a fan, it could not have been otherwise. And dust will not be sucked inside. In addition, this PSU has the so-called Full Range input voltage range of 90 - 264 volts.