The results of the week: Samsung's plans for smartphone sales, Xiaomi Mi A1 beat Google Pixel firmware and other important news

Company OnePlus hints at the early launch of a light gray version of the smartphone OnePlus 5T . On the eve of OnePlus published a video in which passers-by on the streets of London were offered to touch the coming novelty. Judging by the reaction of people, it's about the color of Sandstone White, in which the limited edition OnePlus 5T for fans of "Star Wars" came out. As for the characteristics, the light gray OnePlus 5T does not differ from the original one. The smartphone received a 6-inch Optic AMOLED display with an aspect ratio of 18: 9 and more thin frames from the top and bottom. For performance, the top processor Snapdragon 835, RAM 6 or 8 gigabytes, and the built-in 64 or 128 gigabytes, respectively. The updated dual camera consists of modules with 16 and 20 megapixels with the same focal length, a front camera with 16 megapixels supports the face recognition function to unlock the gadget. Inside the metal case is a battery with a capacity of 3300 mAh. The announcement was scheduled for January 5, 2018.

Samsung aimed to supply 320 million devices in 2018 , which corresponds to the figures of the past year. In particular, Analytics analysts predict sales of Galaxy smartphones at 319 million units in 2017. In addition to the already mentioned 320 million units Samsung is going to realize 40 million "callers", 20 million tablets and 5 million portable devices. With current results, Apple and Huawei - about 200 and 150 million devices respectively - Samsung leadership is not threatened.

A couple of days ago, the founder of OnePlus Carl Pei (Carl Pei) published information that the popular face recognition feature on OnePlus 5T will appear in the previous version of the flagship . This feature was not included in the recent update to Android Oreo, but it appeared in the third version of Open Beta OxygenOS for OnePlus 5. The update became available to all beta testers. In addition, added a December security patch, eliminated the problem of connecting 5 GHz Wi-Fi and vibration.

Xiaomi has launched beta testing of Android 8.0 Oreo for Xiaomi Mi A1 . The first users have already received a new firmware with a security patch from January 1, 2018. That is, Mi A1 was the first smartphone with a fresh security patch, even earlier than Google Pixel. Recall that Xiaomi Mi A1 was the first device of the company, which was released specifically for the program "Android One". The smartphone received a 5.5-inch Full HD display, a metal case, a dual camera, Snapdragon 625 and Android 7.1 Nougat with several applications from Xiaomi.

The joy of the owners of OnePlus 5 about the release of a stable version of Oxygen OS 5.0 did not last long. It turned out that most of the bugs from the beta versions were not fixed in the final release . Some devices went into a cyclic reboot, others had problems with the Bluetooth connection. A bug with double vibration when pressing the on-screen buttons has not gone away. Users complained about the rapid discharge of the battery and even deterioration of the quality of the images taken on the main camera. The OnePlus report says that the company is already working on Oxygen OS 5.0.1 with the necessary corrections, but the release date for the update is not specified. Those who want to return to the previous version, you will have to install the previous firmware with the removal of all data.

The FS8032 model appeared in the base of Taiwanese NCC controller. It is believed that this index hides the future frameless smartphone Sharp Aquos S3 .
The novelty will be equipped with a standard for this model frameless design, 5.99-inch screen with an aspect ratio of 18: 9 and a Snapdragon 630 chip (or 660). The processor will be assisted by 4 gigabytes of operative and 64 gigabytes of internal memory in one version and 6 gigabytes of RAM and 128 gigabytes of internal memory in another. The main camera received a dual vertical module (like the iPhone X) for 13 and 12 megapixels. The front camera will be equipped with a 16 Mp image sensor. There is a fingerprint scanner. For the time of operation the battery is responsible for 3100 mAh. 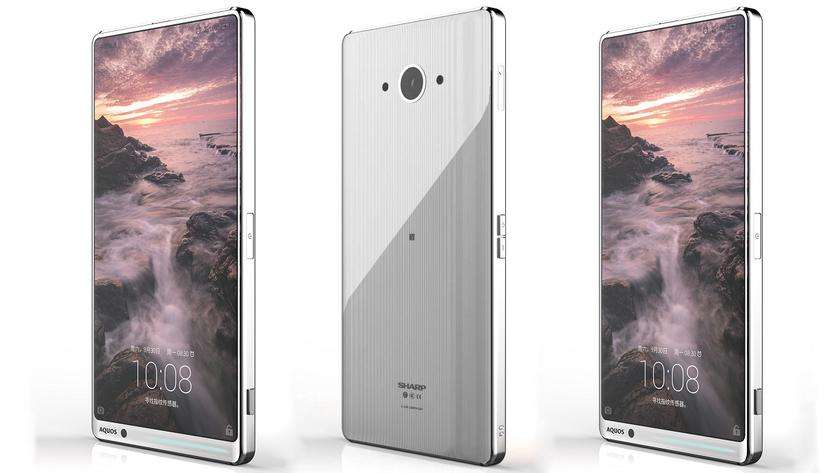 The company ZTE introduced a smartphone Blade V9 with a screen aspect ratio of 18: 9. ZTE Blade V9 received a 5.7-inch Full HD + screen (2160 by 1080 pixels), but the frameless smartphone can not be named. Inside is an 8-core Snapdragon 450 chip, with three versions expected: a basic one with 2 GB of RAM and 16 GB of internal memory, a 3/32 GB version and a top version with 4 GB of RAM and 64 GB of internal storage. On the back there is a double camera consisting of 16 Mp modules (with phase autofocus and aperture f / 1.8) and 5 Mp. The front camera is 13-megapixel. For battery life, a 3200 mAh battery responds, charging via the Micro USB port. In some modifications there will be an NFC chip. The official announcement of the smartphone will take place at CES 2018 in Las Vegas, which will be held from 9 to 12 January.

LG Display will bring to the exhibition CES 2018 a huge 88-inch OLED-panel with a record 8K-resolution of 7680 × 4320 pixels . The new development of the company is also the largest display on organic light-emitting diodes. The 8K format offers four times as many pixels (33 million!), Although at 88 inches the difference in image clarity between 8K and 4K UHD can only be seen at a distance of less than a meter. Among the advantages of the new technology is a higher maximum brightness, since in backlit screens, with an increase in resolution, the area of ​​the pixel grid that does not transmit light significantly increases.