In the database of the popular benchmark AnTuTu appeared unannounced device company ZTE under the brand Nubia.

Judging by the new information, the smartphone with the model number Nubia NX606J and scored a decent 271 674 points and received a screen with a resolution of 2160 by 1080 pixels. So it will be a display made according to modern trends and with an aspect ratio of 18: 9. Other characteristics report the flagship single-chip system Qualcomm Snapdragon 845, 6 gigabytes of RAM and 32 gigabytes of internal memory. Most likely, this model will also be supplied with versions with a large amount of internal memory, because for the present times, such a volume is clearly not enough. Manages an unknown device OS Android 8.0. On the other characteristics, the release date and the price is not known, but still the output of this flagship ZTE Nubia is expected during the exhibition MWC 2018, and some argue that it will be a model Nubia Z19 . 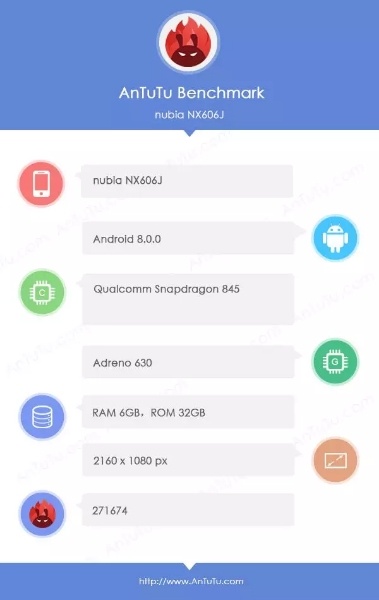 We are waiting for a stylish, powerful and modern flagship from the Chinese from ZTE. The novelty must be equipped with a full-screen design, a dual camera and other chips of the current smartphone market. Hardly it can be distinguished from the flagships of competitors, but maybe it's for the best - conventional displays, thick frames and single cameras are perceived as something not just old, but hopelessly outdated and archaic.