The key thing that a potential buyer expects from a Hi-Fi player is, of course, sound quality. And Astell&Kern SA700 copes with this issue perfectly: it sounds great, is versatile in terms of genres and recording quality. And the player's advantages do not end with that: almost all major music formats are supported, as well as there is a choice of the familiar 3.5mm jack paired with a 2.5mm balanced jack. All of this is packed into a very stylish stainless steel case.

If we talk about controversial moments, the first of them is its short battery life and a long charge. The second issue is no app stores support. In other words, there is support for streaming services, but you have to download and install APK. However, you probably won’t like these extra moves with a player for such a price. There is no point in bringing up the price point: it is Astell&Kern and it is an excellent Hi-Fi player. The potential audience will not be surprised. 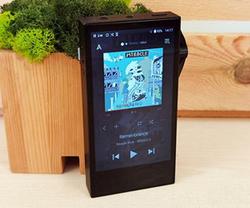 Astell&Kern SA700 is packaged rather unusually. The player is packed in a beautiful double black box with a red Astell&Kern logo. The inner box is taken off upwards and the player is in front of us in a vertical position on a sort of stand. There is only some space for the Type-C cable, protective film and documentation, no cases, adapters or power supply unit included.

The Astell&Kern SA700 is made of a solid piece of stainless steel. It looks and feels expensive and lavish and weighs 303 grams, which is quite normal for a Hi-Fi player. Unlike many of its other models, the manufacturer decided not to use complicated shapes and curved lines. Astell&Kern SA700 got extremely minimalistic shape: a bar with a rotary volume switch at the top of the right edge with smooth ledges. There is a touch screen at the front of the player with an additional sensor button underneath it. The entire front panel is covered with protective glass.

On the top end there is a power/lock button and audio outputs. The player has two audio outputs: a standard 3.5mm and a balanced 2.5mm.

On the left side there are three round buttons to control playback. The middle one is slightly larger and has an additional protrusion.

On the bottom edge there is a Type-C connector and a slot for a MicroSD card under a protective sliding flap. Such a solution looks more convenient and aesthetic than smartphone trays or slots with plugs that have to be removed. Some Hi-Fi players come with two memory card slots. The Astell&Kern SA700 has 128GB inside, so one slot should be enough.

The volume control switch is quite massive, with texture and a round LED at the base. It looks and feels very cool. The volume bars are very informative and have a nice click. The LED notifies which record is currently playing: red - 16 bits, green - 24, blue - 32 bits, purple - DSD.

Dimensions and weight of the player do not raise any questions, considering the category of the player. There are a lot of larger models. Visually Astell&Kern SA700 looks chic, especially in the black color we reviewed. There can't be any complaints about the assembly. The shape of the player itself may be questionable, which we will talk about below.

How comfortable is it to use?

The playback control buttons are not very big, but they are quite comfortable, with a clear, sensible stroke and response. And it is easy to operate the player by touch. This also refers to the rotary wheel. Despite the fact that it is not well covered, there were almost no false triggers in the pocket. But the shape and size of the player is a matter of dispute. Carrying it in a pants pocket (as I prefer to do) is quite challenging. Even if the size of the pocket allows to stuff it in, the squared shape with straight corners occasionally disturbs, and the wear and tear in the pants will appear very quickly. So it's either a chest pocket or an inner pocket.

All the main settings of the player are made with the help of the touch screen. As for the hardware, there are 2x AK4492ECB DACs and some quad-core processor inside. Astell&Kern tactfully omits the model. But never mind, it's not a smartphone after all. The player is able to "digest" up to 32 bits / 384 kHz, there is native support for DSD256. In terms of formats: WAV, FLAC, WMA, MP3, OGG, APE, AAC, ALAC, AIFF, DFF, DSF, MQA. The hardware extras are Wi-Fi 802.11 b/g/n (2.4 GHz) for audio streaming and over-the-air updates as well as Bluetooth 4.2 (A2DP, AVRCP, aptX HD). All this stuff runs on Astell&Kern UI. In fact, this is a very customized Android, from which they removed most of the extra features. On the one hand it makes sense: less functions means a "faster" interface. On the other hand, it takes a very long time to turn on the player. Plus there is another not very convenient point. Support for Tidal, Deezer, Spotify and other streaming services is announced. But they need to be installed using the so-called Open APP function. Simply put - upload the APK-file to the player and install. There is no Google Play or third-party app stores.

The interface itself is convenient and clear. The playback screen has all the basic functions, including Shuffle, repeat, add to favorites, and so on. The top tab (a la Android) is redesigned and consists of two tabs. In the first - connection settings and equalizer, in the second - additional features: A&K Connect, line output, playback without pauses, locking the volume wheel and go to the settings. The media library has the typical filter by album, artist, genre, and format, while the settings menu offers a selection of filters and all other settings that are not audio-related (brightness, theme, update, language).

How does the Astell&Kern SA700 sound?

The player was used with 64 Audio Nio, Campfire Audio Polaris, Beyerdynamic T70, T90, AKG K550MKII and Sennheiser HD 215. Based on Astell&Kern's track record, there was little doubt about the sound quality. Although it is worth noting that there are significantly more expensive models in the range. The time spent with the player fully met the expectations. Astell&Kern SA700 sounds great and versatile. I was particularly delighted by the way it handles complex, multi-instrument rich styles of music. Including classical, jazz and symphonic pieces. Heavy styles of music, up to the extreme speed and gravity, are just as good with this player. Not to mention all sorts of electronics, hip-hop, R'n'B and pop music. The complaints usually arise regarding the midrange performance. The Astell&Kern SA700 doesn't have this problem: the midrange is wonderfully developed and detailed. At the same time, there are no obvious peaks or dips in the whole range of reproduced frequencies. And the overall character of the sound, even in spite of the excellent detail, does not go into dry analysis, preserves the drive, the necessary intensity and musics.

Bass frequencies are very detailed, precise, massive, and perfectly controlled. The player is awesome at conveying all the character of the instrument, fades, attacks, and in general handles even the most intricate and fast bass lines. Perhaps this kind of detail will lead some to feel that there is some lack of bass, but this point will certainly depend on the headphones. It seems to me that with just the headphones the player can really sound a bit dry. The middle frequencies in the Astell&Kern SA700 are beyond praise. You can' t say that they are elevated relative to the rest of the range. But thanks to their detail, precision and texture they sound great, allow you to hear even the smallest nuances of the recording (of course, good quality) and draw more attention to themselves. With the proper headphones, the player is able to draw a very wide and expansive imaginary scene with excellent instrument positioning and separation. High frequencies are clear, airy and detailed. But, at the same time, as it seemed to me, they are a little bit "smoothed". No harm, but solely to exclude excessive aggressiveness. At the same time, with the development of the attacks and fades everything is absolutely fine. You cannot call Astell&Kern SA700 extremely demanding to the quality of records. Certainly, you can get maximum pleasure only with quality materials, but the player does not stick out all the flaws in the materials of worse quality.

How long does the battery last?

Long battery life has never been the strong point of quality Hi-Fi players. The Astell&Kern SA700 is no surprise in this respect. The battery capacity is 3150 mAh. The operating time will depend significantly on the formats of the files played, volume, screen activity, activity of wireless interfaces and the output used. When listening in the background (screen and wireless interfaces are inactive) to DSD and FLAC with headphones plugged into the 3.5mm jack, the player lasted about 7 hours.

There are also some issues with charging: the player itself does not support fast charging and charges fully over 4 hours. But it turned out that there is one more little thing: the player simply refused to charge from a weak power supply ( like from iPhone) or from USB-ports, so I had to look for a more powerful adapter.

3 things to know about the Astell&Kern SA700 player: