Acer has expanded the Nitro 5 range into a very impressive size. And almost everyone looking for a gaming laptop can find something suitable. Today's hero Acer Nitro 5 AN517-41 will do just fine as a desktop replacement. It has a combination of a powerful AMD Ryzen 5000 series processor and a GeForce RTX 3000 graphics card, so there is no problem with performance in modern games.

The laptop is equipped with a high-quality IPS-screen with a refresh rate of 144 Hz. And the 17.3-inch diagonal is more comfortable for games, but it makes the laptop more bulky. The cooling system does its job well, and the laptop does not experience overheating even with extended loads. Perhaps, only audio system could be a little better. 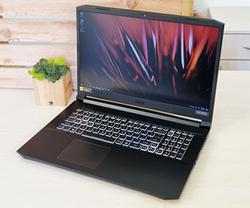 Acer Nitro 5 AN517-41 is packed in a standard mustard-colored cardboard box with the model name, images of some combat robots and a carrying handle. Inside there is a laptop, a power supply unit with two removable power cables (with plugs for different sockets), an adapter and a set of fasteners for installing an additional drive.

Acer Nitro 5 AN517-41, like the entire range, is made of black plastic. The coating appears to be matte, but  still collects fingerprints a little. The laptop looks rather modest for a gaming model. Only chopped outlines and a red decorative insert on the back end remind of games. Above it there is red Nitro inscription. All this looks solid and does not cause rejection, like some too eye-catching gaming laptops.

Now let's move on to the ends of the laptop. On the left there is a Kensington lock slot, air vents, a sliding Ethernet (RJ-45), a pair of full-size USB Type-A 3.2 Gen 1 and a combo headset jack.

On the right side - HDMI, full-size USB Type-A 3.2 Gen 2 with support for charging in the off state, USB Type-C 3.2 Gen 2 and another area with ventilation holes. There is port selection available, but no DisplayPort and a frame reader.

On the rear end, they decided to put a socket for power supply connection. On the sides there are a couple of zones for blowing hot air outward.

The front is rather ordinary. The wedge-shaped case is made in such a way that the laptop opens without any problems.

On the bottom cover of the laptop there are a lot of holes for the intake of cold air, massive rectangular legs for stability and Acer triangular designations of hot zones of the laptop, traditional for gaming.

The bezels around the screen on gaming laptops are usually not minimal. The Nitro 5 has thin side gaps. Above and below it is noticeably wider. Above the screen you will find a camera with microphones and rubber inserts. Under the screen there is Acer logo, and below, already on the main unit, there are LED indicators.

No questions about the assembly of the laptop, all the details fit perfectly. But plastic is plastic and the lids bend a little, which is not surprising. Although in order to "push through" the working surface, you need to do it purposefully. During the work, no questions arose. The laptop is not very mobile, like absolutely all 17-inch models. Its dimensions are  403.5x280x24.9 mm, so it will not fit into every backpack. The weight is 2.7 kg, which is sensible compared to ultrabooks, but very good for a 17-inch gaming model. Usually 15-inch gaming models weigh more.

You can easily Acer Nitro 5 (AN517-41) with one hand. The maximum angle is about 145 °. The screen is well fixed in the desired position, but shakes slightly if you hook it with your hand. Although with such a diagonal, this is expected.

The 17 "Acer Nitro 5 has the same layout as the 15" model. It is full size with a separate number pad. Enter is single-story, the left Shift is long, the right one is slightly truncated because of the up arrow. The arrow block is in no way separated from the rest of the keys, but visually highlighted with an additional white border. The arrows are used to adjust the display brightness and audio volume via Fn. The upper functional row is slightly reduced in height, it ends with a power button. Between Backspace and Num Lock they placed the launch button for the original Acer NitroSense utility. The WASD block also has an extra white border. The layout is great for games. For typing - it takes a little time to get used to.

The size of the buttons and the distance betweenstroke them are standard, the  is 1.6 mm. Quite enough for comfortable use. There is RGB lighting, which is divided into four zones. It is adjusted by Acer NitroSense. It's not very bright, but just right for evening use. Everything is visible, but not blind:

The touchpad is medium in size, the buttons are not separated. Sensitivity and size are sufficient for everyday use. It is possible to quickly turn it off (F2 is combined with the corresponding button) during games to avoid accidental clicks. Although, based on personal experience, this is not at all necessary.

The Acer Nitro 5 is equipped with a 17.3-inch IPS display. There are configurations with FullHD and QHD resolutions, and refresh rates can be 144, 165 or 360 Hz. In our case, a FullHD matrix with a frequency of 144 Hz and a pixel response time of 3 ms is installed. Visually, the screen is very good, both in terms of colors and viewing angles. The margin of brightness is more than sufficient indoors. Playing on a fast screen is, of course, much more enjoyable than on a standard 60Hz. Especially in shooters and action games.

The tests has shown very good brightness and contrast values ​​of the screen. The maximum brightness was 291.585  cd / m², the black field brightness was 0.288  cd / m², and the contrast ratio was 1018: 1 . The color gamut is almost the same as sRGB, but there is an overabundance of blue, as a result the picture goes a little into cold shades. You can forgive this for a game model.

The new Acer Nitro 5 is available in a huge number of configurations, both on Intel and AMD processors, and NVIDIA GeForce graphics cards are used , starting with the GeForce 1650 and ending with the RTX 3080. A "charged" configuration on an AMD processor is the hero of this review. To be precise, the laptop has a very powerful AMD Ryzen 7 5800H. It is a mobile processor of the AMD Cezanne line based on the Zen 3 architecture and is made with the 7nm FinFET process technology.

Roughly speaking, in terms of performance it is in-between the desktop and Max-Q versions. It is equipped with 8GB of GDDDR6 memory. The base frequency of the chip is 780 MHz and boost to 1290 MHz. Wireless modules: WiFi 802.11 ax and Bluetooth 5.1, as well as the RJ-45 Gigabit Killer Ethernet E2600.

As expected, the laptop demonstrates high performance in the synthetic tests. This applies to both the graphics subsystem and the processor:

The Acer CoolBoost system with two fans is responsible for cooling the insides. Hot air is blown out from the back and sides of the laptop. But the holes are placed in such a way that the flow of hot air does not get on the hand with the mouse. Unfortunately, AIDA64 did not make friends with the laptop's sensors and only the drive temperature was displayed in the stress test. But the original utility Acer NitroSense showed that during the entire test the temperature of the processor did not exceed 91 ° (with the official maximum of 105 °), and the graphics accelerator - 69 °. The system does not throttles even under prolonged maximum loads. In this case, only the area above the keyboard becomes warm. The keyboard itself remains cold. The CO makes a noticeable noise under high load, although this is a standard situation for all gaming laptops.

All games tested were run with the highest possible graphics settings (including Ray Tracing where applicable). And, it should be said, the results are very impressive. Metro Exodus shows a range of 70 to 90 frames per second. Gears 5 - 105-125 fps. The long-suffering Cyberpunk 2077 with the settings turned to the limit shows the frame rate in the range of 35-45 fps, and Control - about 35 fps.

2W stereo speakers with Dolby Audio certification are responsible for the sound in the laptop. They did not demonstrate anything special: a typical laptop solution, which is enough for watching movies or videos on YouTube. Their quality will not be enough for music, but during the game it is better to use headphones.

DTS utilities are here to adjust the sound.

The Acer NitroSense application helps to configure the laptop. It can monitor the system, select performance level, operating mode of the cooling system, adjust the keyboard backlight, disable the Win button, and more.

The laptop is powered by a 4-cell 59 Wh battery. The manufacturer promises up to 9 hours of battery life. In real conditions, i.e. office and browser work with low brightness, the laptop battery life is enugh for about 5 hours. Which, in fact, is very good for a game model.