Samsung Odyssey G9 Review: The World's First Gamer Monitor with a 1000 Radius Curve, Matching the Curve of the Human Eye

The Samsung Odyssey G9 is one of the most advanced ultra-wide curved gaming monitors currently available. It features an excellent quality VA panel with Quantum Dots, HDR10+ support, a maximum refresh rate of 240 Hz and a pixel response time of 1 ms. Samsung claims that it is the world's first curved monitor with a 1000R radius of curvature.

All this together with AMD FreeSync Premium Pro and NVIDIA G-Sync support will allow you to get a great clear and dynamic picture in any game. Provided you have a PC with the appropriate performance components. For work, the Samsung Odyssey G9 will also be quite suitable and it is a more convenient alternative to two monitors placed side by side. Particularly since you can split the screen and display images from different sources at the same time. And as a bonus, Samsung Odyssey G9 simply looks awesome. 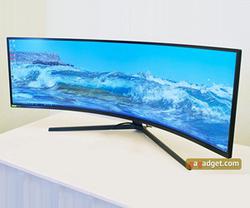 A big box for a big monitor. The Samsung Odyssey G9 package is really bulky and its transportation might be a bit difficult. Inside - the monitor itself, the stand, the base, a removable cover for the back panel, a removable part for attaching the monitor to the wall, power cables, DisplayPort 1.4, USB (for the hub) and documentation.

The Samsung Odyssey G9 looks absolutely rockin'. And it's not just about the extended 32:9 aspect ratio, the enormous size, and the futuristic back panel with backlighting. Another important feature is the curve. Usually the curvature radius in most modern models is 1800R or in simpler words - 1800 mm. The Samsung Odyssey G9 has a curvature radius of 1000R (1000 mm, or roughly 39 inches). Speaking more clearly, the curvature is more visible. According to Samsung, this is the world's first curved monitor with a curvature radius of 1,000R. Samsung says this curvature matches the contours of the human eye, which is supposed to produce a positive effect on perception when using the monitor.

The monitor base is wedge-shaped and has a very impressive size and weight. The monitor is big, so it is necessary to provide the appropriate stability on the table. But it also takes a lot of space on the table.

The back panel of Samsung Odyssey G9 is almost entirely made of glossy white plastic. There is a decorative silver stripe in the middle and the logo of the Samsung Odyssey gaming range on the left. Around the place where the stand is attached to the monitor there is a circular RGB Infinity Core illumination. The stand itself can be detached, and instead of it, a VESA wall mount can be installed. The lower part of the body with all connectors is covered by the removable lid.

What is a flagship gaming monitor without RGB backlighting? The Infinity Core Lightning looks very futuristic, reminding you of a jet engine turbine. You can customize it: choose the color, different effects, or just turn it off. In the evening, with the lights turned off, it will look especially impressive if the monitor is placed close to the wall.

The stand is also covered with a lid made of white glossy plastic. There is an option for cable management, which we will talk about in more detail later.

The monitor takes up an impressive amount of table depth, which is logical considering its shape and capabilities. To be exact, together with the stand, the monitor is 16.39 inches deep.

All display control is done with a five-position joystick on the bottom of the body. It is quite enough, and it is convenient to use.

All connectors point downward and are located on the wide area to the right of the stand mount. After the cables are plugged in, all this is covered by a protective lid.

Despite its large size and adjustability, the design of the Samsung Odyssey G9 is very well engineered. The assembly takes literally a few minutes. There are no complaints about the quality either. Except that we can question the convenience of the glossy plastic for the back of the monitor. Physically, Samsung Odyssey G9 looks very cool, as expected from an expensive gamer's monitor.

Ease of use, settings, and connectors

The set of ports can't be called super rich, but the essentials are there. Two DisplayPort inputs version 1.4 and one HDMI version 2.0. Why there is no 2.1 in the current flagship model is a mystery. Then there's also a 3.5mm headset jack and USB 3.0 for two ports. For some reason, Samsung also decided to ignore Type-C and Thunderbolt.

The design of the stand turned out to be handy, smart and functional. The outer white cover is completely removable, cables are routed inside, as a result everything looks neat and nothing is loose.

At the top of the stand you can hang your headset on a folding rack.

The height adjustment range is 120 mm. In its lowest position the screen almost touches your desk.

The monitor is adjusted with a five-position joystick. It is quite enough to work comfortably with the monitor.

The on-screen menu has an absolutely familiar sequence of logic, so it won't be hard to understand. The first press opens a quick menu, from which you can turn the monitor off, quickly go to entry selection, PIP (Picture-in-Picture) and PBP (Picture-by-Picture) settings, and the full settings menu. It's wisely divided into separate items for picture settings, game functions, backlighting, software updates, and so on. The only difficulty is that the monitor has a huge amount of functions and additional features (up to the screen scope). It's worth not being lazy and taking the time to customize everything to your preferences. Plus some of the features can not work at the same time. This is quite a common gaming model issue.

How good is the picture quality?

The pixel response time is claimed to be 1 ms (GtG) and refresh rate up to 240 Hz. A maximum brightness of 420 cd/m2 and a peak of 1000 cd/m2 (when briefly displaying white in a small area of the display) is stated, which means that the display complies with the VESA DisplayHDR 1000 specification. There is support for HDR10+ and the contrast ratio is promised to be 2500:1.

The colors are rich, the reserve of brightness with excess, viewing angles are excellent, and blacks are very deep, which is typical for VA panels. The drop in contrast at different angles is very small, Glow-effect is also not too strong. Weak silver glare is slightly noticeable at some angles. The backlight evenness is very good. Yes, in the corners you can see a little bit lighter areas, but this is only noticeable in a dark room with a dark background.

The measurements were made in four display modes, with the settings reset to the default ones. In sRGB mode the maximum brightness was 404.553 cd/m², color gamut is close to sRGB, all values are close to the reference values, and the average color error ΔE is 3.32. This is a very good indicator for a gaming model.

In FPS mode, the maximum brightness is slightly lower: 392.395 cd/m², the color gamut is significantly wider than sRGB, and the color rendering goes a little bit into cooler shades:

In Cinema mode the maximum brightness was 419.394 cd/m² (as declared), the color gamut, as well as in the last case, is wider than sRGB. But in the rest this mode is slightly worse in terms of color accuracy, and the gamma curve has a very strange shape and is far from the benchmark.

In RTS mode, the maximum brightness is 391.662 cd/m², and with other indicators it is close to FPS.

How good is Samsung Odyssey G9 in use?

Samsung Odyssey G9 is first of all a gaming monitor. And from the gaming point of view everything is perfect: there is support for AMD FreeSync Premium Pro and NVIDIA G-Sync, which, together with a high-quality and bright screen, frame rate up to 240 Hz and the claimed response time of 1 ms (from gray to gray) will theoretically allow you to get a very high-quality picture without artifacts, frame rips and blurred images. Why in theory? Native 5120x1440 resolution requires powerful hardware to get high frame rate in modern games. We used a laptop with an AMD Ryzen 9 5900HS and a 16GB nVidia GeForce RTX 3080 mobile for testing, so there were no problems with performance and FPS.

According to our personal experience, it looks cool in most cases, although there is a minimal blurring effect on the edges of the picture. But you should understand that the wow effect is not present in all games. First of all, this monitor is perfect for first-person shooters and simulators. Although it is quite useful to get a lot more space in the strategies, too. Most modern games already support such "extended" monitors, but with older games there will be black bars on the sides. And cutscenes in some games will look like this:

As for the rest, there are no other difficulties when using the monitor. If we talk about working on the Samsung Odyssey G9, and in general, the benefits of this format, we should take into account that we have in fact an equivalent of two 27-inch monitors with a 16:9 ratio and a resolution of 2560x1440, which are glued together. So if you are used to two monitors, there will be no questions: spreadsheets on one side and a browser on the other, a stretched timeline in video/audio editors, two signal sources simultaneously - it's all really comfortable. But it takes a little getting used to. For quick and convenient space arrangement there is a built-in utility Easy Setting Box. 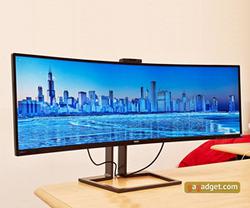 The Philips Brilliance 499P9H also has a 49-inch 10-bit VA matrix with 5120x1440 resolution and has VESA DisplayHDR 400 certification (the hero of today's review has VESA DisplayHDR 1000). The Philips has an 1800R curvature radius and is therefore less curved. Philips has a worse gaming solution: its refresh rate is only 70 Hz, its pixel response time is 5 ms, and it only supports AdaptiveSync. But there is a full-fledged hub with Type-C and RJ-45 network connection. In addition, you will find built-in speakers and a retractable webcam. As a result, this monitor is rather for working, than for gaming. With that, its price is lower.