Shanling MTW200 are convenient in use, comfortable TWS headsets, which are definitely worth paying attention to fans of various electronic music, and in general the sound with an emphasis on bass. They have a well-designed shape, are lightweight and sit very comfortably in your ears. And the IPX4 rating allows them to be used even during sport activities. The touch controls are responsive, though not the most obvious. And the long battery life is another strong point of the headphones. But there are also some complaints: the sound cannot be called versatile and fans of live/instrumental music should look for something else. There is no proprietary application for the headphones, which means that there are no settings and you can not customize the control. 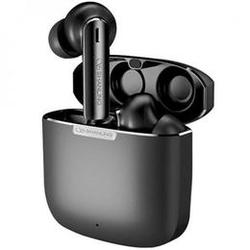 Shanling MTW200
TWS in-ear headphones with 10mm surround drivers. They have a sound accentuated at low frequencies. Under touch control. Waterproof according to IPX4 standard. Bluetooth 5.2 is used for connection, there is support for SBC, AAC and aptX codecs.
Check price on Amazon

What is in the Box?

Shanling MTW200 are packed in a relatively small box with a magnetic lid. On the box you can see the image and the name of the model, on the back - a list of the main features. The set includes the eaphones themselves in a charging case, 3 more pairs of interchangeable eartips, a USB Type-C cable for charging and instructions.

The Shanling MTW200 has a fairly standard TWS earphone design with a "leg". The main part of the earpiece with the driver and nozzle, and the inside of the leg are made of matte black plastic. The sound drivers are placed slightly at an angle. Next to them there is a small hole, the purpose of which is not specified in the instructions — perhaps the compensating hole. On the inside of the leg there are markings of the left and right earphones.

The outer part of the earphone leg is made of plastic in the same color as the charging case. In our case, dark gray with a barely noticeable copper shade. On it there is the Shanling logo, above there is a slot in which the LED indicator and microphone are hidden.

On the bottom of the legs you'll find contacts for charging earphones and one more microphone.

Under the nozzles there was another hole, closer to the sound duct. The sound ducts themselves are visually of standard diameter with mesh screens to prevent dirt from getting inside. There is a trim for reliable fixation of the nozzles. The length of the earpieces is not too long, so you should not expect a deep fit in your ears.

Shanling MTW200 is not the most compact, but very light. They are IPX4 waterproof, which means they can withstand direct splashes of water. And this means that you can not only do sports in the gym, but also not be afraid that the headphones will “die” in the rain. But you cannot be submerge them in water.

The charging case turned out to be very interesting. It is fully metal with a matte finish in dark gray with a copper touch. The case is weighty, but has a compact size and flat shape, making it easy to carry in your pocket. There is a Shanling logo on the front and a single LED charging indicator, which glows red, yellow or green depending on the battery level.

The lid opens quite easily, but does not lock too securely in the open position. It closes with a very pleasant sound of metal hitting metal. In the closed position the magnet holds the lid quite securely, it does not open spontaneously. Inside there is nothing interesting: two places for earphones with contacts and marking left-right earphones.

On the bottom of the case there is a USB Type-C connector for charging.

Shanling MTW200 in Use

The shape of the Shanling MTW200 was very clever: they instantly fit in the right position in the ears. Thanks to their very light weight, they are hardly ever felt in your ears and don't stress you out over long periods of use. The fit is shallow, for my liking. I was constantly trying to shove them deeper into my ears. Despite this, the passive sound insulation of the earphones is very good. Of course, with properly sized ear pads.

The case is devoid of any buttons. To go into pairing mode, you need to take out the earphones. After pairing, the earphones will connect to your smartphone (or any other source automatically). Accordingly, to connect to another device, you will need to manually disconnect them from the current device. There is no Multipoint support, but it is possible to use the headphones one by one. Bluetooth version 5.2 is used for communication with a smartphone. SBC, AAC and aptX codecs are supported. Shanling MTW200 works with both Android and iOS without any problems.

To control it, there are touch zones on the outside of the earphones, just below the light indicators. The touch control scheme is quite unusual, but you can get used to it:

Touch areas work steadily and clearly. There is no app for additional configuration of the headphones, so you can't reconfigure the control.

The sound in the earphones is made by 10-mm dynamic transducers made of composite materials. In terms of sound delivery Shanling MTW200 is a little different from what we are used to hearing from Shanling. In this model, the manufacturer decided to focus on bass. The sound is a little darkened. And, accordingly, the best sound in these headphones is music styles with an emphasis on bass. Diverse electronics, pop music and hip-hop are reproduced organically and richly. Live music is not so pleasant, a bit lacking in the natural sound of live instruments.

The bass is very deep, with plenty of sub-bass, with a good attack and without blurring into a monotonous mess. The bass is not superdetailed, but it is controlled well enough, and sounds quite natural. They have their own texture and enough resilience to properly "pump".  There is also a noticeable lift in the high frequencies. Which added clarity and allowed the headphones not to slip into a completely dark sound. The treble is almost not smoothed, as is often the case with headphones aimed at the mainstream audience. But they are not harsh on your ears. You should not expect super detailed and pure tweeters, but they sound quite natural and pleasant, adding a little "holiday" to the overall sound.

The middle frequencies have a slight dip in the middle and lower part of the range and rise at the junction with the tweeter. In general, the midrange is sufficient in quantity, but its reliability and detail seemed to me not the strongest side of the headphones. Especially it is felt when playing live music: instruments sound a bit muddy and not always natural. The imaginary scene is average in scale, although you should not expect miracles from the TWS in-ear phones  in general. But the positioning and separation of the instruments is very good.

Microphones in TWS-models are almost always not of super quality. Shanling MTW200 is not an exception in this respect: the interlocutor can hear normally even if you are on the street. But you can feel the squeezed range and in a strong wind the information decreases quite a lot.

The producer states that Shanling MTW200 can work up to 9 hours (probably at 50% volume), and a charging case with a 450 mAh battery will extend the life up to 42 hours. It takes about 1.5 hours to charge. In practice, when using the aptX codec and a volume of 70%, the earphones work without recharging for about 7 hours, which, albeit less than the declared 9 hours, is also impressive.

3 Things to Know about Shanling MTW200: