Recently we wrote that Vice President Lenovo Group Chang Cheng announced the date of the announcement of the smartphone Lenovo S5 with a battery of 6000 mAh . Novelty will be presented on March 20. Now, on his page in Weibo, Mr. Cheng published an advertising poster for the future device and said that the Lenovo S5 will be more powerful than Xiaomi Redmi Note 5.

This statement was made in response to the position of Xiaomi CEO Lei Jun, who showed the advertising teaser Redmi Note 5 . The new photo reported that the new Xiaomi will be equipped with a Snapdragon 636 processor and 6 gigabytes of RAM. 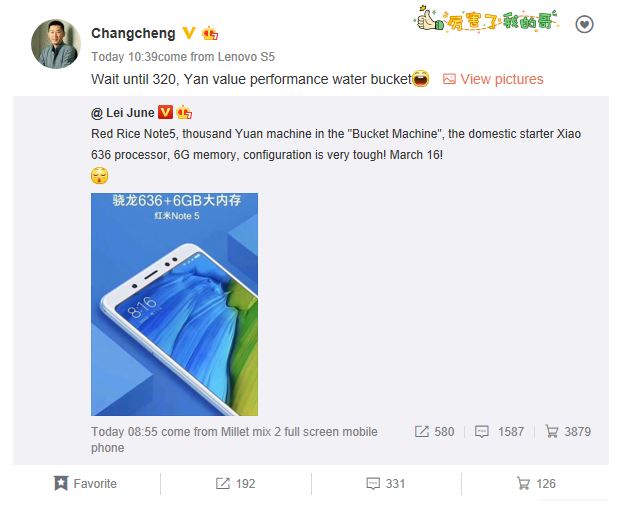 The advertising poster Lenovo S5 features a red smartphone with rounded corners, a classic round fingerprint scanner on the back cover, a dual main camera and a flash on the right. There is no front panel in the picture, but it's not hard to guess that there is a modern display with a ratio of 18: 9. The smartphone on the teaser is very similar to the frameless Lenovo K520, which recently appeared in TENAA.

Now it is known that the Lenovo S5 will receive a thin shell, a shell of ZUK company called ZUI Android and a huge battery for 6000 mAh. The announcement of the smartphone is scheduled for March 20 in China.