OneDrive recovery is now available to all subscribers of Office 365

Microsoft has announced several useful innovations in the Office 365 service. From now on, users will be easier to return online storage to their original state, if something went wrong. The company also promises increased protection against malicious links and attachments. 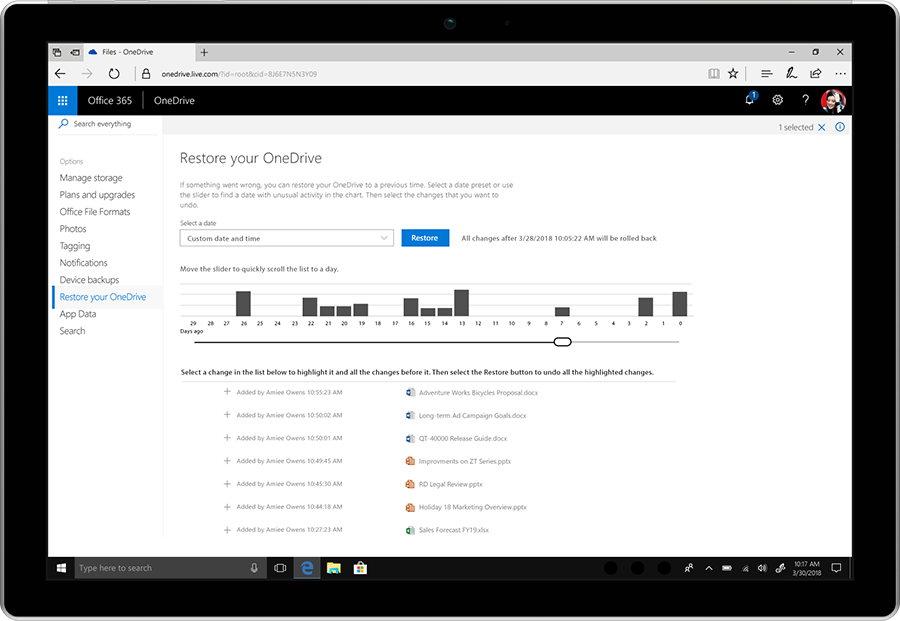 OneDrive supports the history of changes and allows you to return to the old version of the document, but if you need to do this not with one, but dozens (sometimes hundreds) of files? For example, if the computer is "bossed" the virus. For such cases, developers have added the ability to restore the storage. Previously, the function only worked for business accounts, and now it was made available to all subscribers of Office 365.

How it works? OneDrive captures all changes and allows you to return to any state in the last 30 days. The user just select in the settings "restore OneDrive" and specify the desired date. In Office 365, there were also notifications of suspicious activity in the "cloud" (for theft of accounting data, PC infection by viruses-extortionists, and so on). And access to the files by reference soon can be further protected with a password.

In the coming weeks, Outlook.com will turn on the function of encrypting emails and banning forwarding. Users of the Microsoft mail service will be able to view such messages as usual, and other services will display a special link to view the content. This is done in case the unreliable connection is used on the recipient's side.

In the most "paranoid" mode, even Word, Excel and PowerPoint documents will be encrypted so that when redirected, outsiders can not open them. The function can be useful if a letter is accidentally sent to the wrong person, but it is unlikely to protect against targeted data theft.

Since October, for Office 365 users, Outlook.com has been running a more advanced antivirus attachment scanner, and later this year developers will add an office document check for malicious links.