Brio Beardscape: iPhone among the beard trimmers. Is it really so good?

The Brio Beardscape beard trimmer is impressive upon arrival. It comes in an a fashionable box with a stylish travel case.

Along with the unit itself there are four reversible clipper heads paired together by length 1 and 2 mm, 3 and 6 mm, 9 and 12 mm and 15 and 18 mm. You will also find a USB plug in cord charging base, cleaning brush, and lubricating oil.

So what makes the Brio Beardscape different is the abundance of features that come directly on the trimmer. 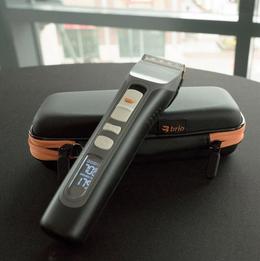 Right from the top, we're introduced to ceramic blades, paired with a gold finished titanium rake, precision ground to match perfectly. Brio touts these ceramic plates as being four times harder than stainless steel, creating less friction and heat and being quieter than metal.

Moving down the unit, the Brio Beardscape comes with an integrated one millimeter to 1.9 millimeter blade height adjustment with 0.3 Millimeter height transitions in between. These are controlled with the lever lock button and micro adjust lever.

Next feature is a speed control adjustment, which allows you to increase or decrease the RPM speed of the blade from 5,000 RPM to 7,000 RPM. Then an on/off button and convenient LCD display sit just below.

Within the LCD you will first notice five circles at the top of the display. These show the load and the clipping head as the clipper may become clogged with hair or needle oil. And the first three circles display a load state under normal use, while if the fourth and fifth circles light up, the clipping head must be cleaned and oiled. This indicator is followed by an RPM speed and remaining charge time display based on the speed setting of the trimmer. This will show differing amounts of battery time remaining.

The Brio Beardscape beard trimmer pumps with an extra large capacity lithium ion battery. It will last up to four hours based at a full three hour charge. It can be charged on the base or plugged in while in use, even if the battery's empty.

The Brio Beardscape trimmer can be used for hair, beard, and any manscaping project. It's noted by Brio to never run the blades under water because they only like oil.

The cut wasn't what we expected. There's a lot of pros with this unit, but there's also a some cons in there.

For me personally, I don't think it's something I would continue using. I wanted it to be able to give me a little bit more precision and obviously you can't do that if it doesn't have the attachments.

But I do like the speed of that it has. I like the RPMs it has. I like the digital display. They can tell me the time that's left. Once again, I'm going to go back to the Philips Norelco multigroom 7000 and the Wahl Lithium Ion plus. Right now those two are the top ones for me, for the precision on your face. They're around the same exact price.

I'm not going to tell you, hey, this is the greatest product out there. Definitely not an iPhone version of the beard tommer. I didn't get that experience from it. I think it's a good product. I think it was made well, but I think some of the things could have been made a little bit better. It cuts well, it cuts sharp, but it's not what I want out of the trimmer for small type of beard.