It would be strange and even naive to think that flexible screens appeared out of nowhere. In fact, developments in this direction were conducted for a dozen years, and a conceptual video of what could be a smartphone with a flexible screen Samsung showed back in 2014. Even then, the company thought that it could be a smartphone in a folded mode and a tablet in a unfolded mode. By the way, the smartphone wallpaper in the video is recognizable – it was used with the Samsung Galaxy S3. 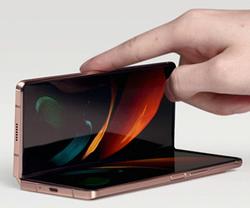 How a foldable OLED display works

In fact, foldable OLED display is the same display as any other, only applying a plastic base instead of glass, which makes it flexible. A layer of organic electroluminescent semiconductors (which are actually called OLEDs) which are already applied to the plastic base. The plastic base is made of polyethylene terephthalate ( it is also called PET, PETG), lavsan, mylar - a lot of market names, registered as a trademark. We regularly use products made of it, such as plastic drinking bottles. These are the same PET bottles (patented, by the way, back in 1973) that use the properties of plastic to go transparent when heated, to then cool sharply after taking the desired shape.

These materials are strong and durable, yet it only seems that it is a matter of technology to make a flexible OLED display on their basis. In fact, there were a number of problems that had to be solved. For example, encapsulation, as when OLED materials are in contact with moisture and air, they break down. And also regular bending, since we plan to bend the screen hundreds of thousands of times while working with the smartphone. This creates mechanical stress (tension) in the materials. That is why it took so long to solve all these problems so that we could see serial devices with flexible displays.

Despite the fact that the origin of the base plate of the Samsung Galaxy Z Fold 2 display comes from PET, the company still calls its material glass. The company came up with a special name for it: UTG or Ultra Thin Glass.

There is a very interesting solution for the Flex Mode feature. In a separate post we will talk about what it gives to the user. And now let's talk about how the engineers mechanically implemented open display fixation at different angles. The smartphone developers called this solution CAM Mechanism. It allows you to hold the screen at an angle of 75 or 115 degrees without closing down on its own. On the picture below you can see how it works.

Inside this mechanism looks and runs as follows:

The articulation system has four double CAM modules, one pair on each side of the folding display:

Besides the complex mechanics, it was necessary to solve another problem of the folding display. In the old flaps, the articulated joint consisted of two different parts. The Galaxy Z Fold 2 has a large one-piece screen, which is not divided into two parts. As a result, the inner part of the flexible display must extend beyond the edges of the case when bolded. They solved this problem by creating two virtual axes, between which the fold is hidden.

You think that's it? Well, it isn't. You need extra space for that fold. And where there is free space, dust and all sorts of small crumbs from our pockets and bags are constantly gathering. They all put extra stress on the inside of the display every time you fold and unfold it. Samsung engineers considered more than a hundred (!) ways to solve the problem. And, as a result, they created a special carbon fiber and nylon sweeper brush, borrowing the idea from powerful Samsung vacuum cleaners with turbo bristles rotating 20 times per second. These bristles are only 0.87 millimeters and clean the screen from the inside with every unfolding and folding of the smartphone.

This is the way the hidden joint mechanism of the Samsung Galaxy Z Fold 2 looks like in operation. It consists of 60 parts and is designed (as claimed by the developers) to withstand 200,000 unfoldings of the device. That's more than a hundred openings a day for ten years.

The outside of the hinges. Everything looks neat and reliable. I had the first Fold for a couple of months and had no problems with the folding display. I've had the Fold 2 for a few weeks now, and the result is the same. All fears of how reliable the flexible screen disappear after the first few days of use. The main thing to remember is that the manufacturer does not recommend removing the protective film - it can cause damage to the screen and the failure of the smartphone display.

The fold of the screen is easy to feel when unfolded - it protrudes a little, this is a characteristic of the screen technology, the same way you can feel the fold of the more compact Z Flip. Perhaps in the future they will remove it, but so it is now. For me personally, it does not cause inconvenience at all, but I do not exclude that there will be people who will not like it.

Next time we will talk about how good both displays are in terms of a special tool - a colorimeter.