Following smartphones with foldable screens, the appearance of laptops is quite logical. Lenovo ThinkPad X1 Fold was the first such laptop. Although it is hard to call it a laptop at all. Rather it is a tablet with a flexible screen on Windows 10 with a wireless plug-in keyboard. In any case, the gadget is very different and unique. And in terms of technology demonstration it's great, so the wow effect is there.

In real life the ThinkPad X1 Fold is a bit controversial. The gadget runs on a full-fledged Windows 10. However, it cannot replace a laptop yet because of its not very handy keyboard and touchpad, as well as poor software optimization. In general, the Lenovo ThinkPad X1 Fold looks like an experimental pioneer, on which the company decided to conduct "field tests" of new technologies. And in the next generation they will take into account all the special features and pitfalls and release a more widespread and finalized product. We tested the Lenovo ThinkPad X1 Fold with a keyboard, stylus and 512 GB SSD. 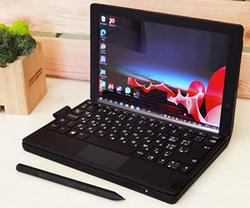 3 reasons not to buy the Lenovo ThinkPad X1 Fold:

The unit is packaged similarly to the top laptops of the ThinkPad line: a mustard-colored cardboard outer box and a black inner box with the X1 logo. The package includes the Lenovo ThinkPad X1 Fold itself, a wireless keyboard with touchpad, a branded stylus, a 65W Type-C power supply, a power cable, and documentation. There are probably other kit options (for example, without the stylus).

Lenovo ThinkPad X1 Fold is hard to identify with any of the usual form factors. When fully opened, it is rather a Windows 10 tablet with a wireless keyboard. If you "bend" it a bit, you get something more resembling a compact netbook with a touch screen keyboard. Or the same, but with a compact wireless keyboard: it is installed on one of the ThinkPad X1 Fold 'halves' by means of magnets. However, the gadget always correctly switches between vertical and horizontal mode. Although Windows 10 and the usual software is clearly not ready for such devices.

The now available smartphones with foldable screens have a visible and sensible band line. The ThinkPad X1 Fold also has this line, but to a much lesser extent, visible only at certain angles and not eye-catching.

Unlike modern laptops, where manufacturers are trying to make the bezels around the screen as small as possible, the frames in Lenovo ThinkPad X1 Fold are quite noticeable. Which makes sense: the gadget can be used as a tablet. And considering the 13.3-inch screen and the weight of 1 kg, it is essential that the device does not fall out of your hands. The screen around is covered with a rubberized material, which improves the grip. The functional elements above the screen are a webcam along with an infrared camera for face recognition.

The body itself is made of magnesium alloy with a matte black finish. All functional elements and connectors are placed around the Lenovo ThinkPad X1 Fold. Ports, as you might have guessed, are very few: two USB 3.2 Type-C Gen2, in some versions there is also a SIM-card slot. In addition, there are also cooling system vents, speakers, four microphones, a volume control button and a power button with LED indicator. There is no space for a 3.5mm audio jack.

The foldable screen is not the only special feature of the unit: the design is made in such a way that in the folded state the keyboard can be stored just between its halves, and there is a rubber band for the stylus on the keyboard. Externally, when folded, the gadget resembles a large leather-bound book. When closed, a glass decorative panel is opened on one side.

When open, one of the corners of this cover is bent and acts as a stand. It allows you to adjust the angle of inclination within small limits. Behind it there is a small cover, which is fastened with a couple of screws. Judging by the size, there is an SSD hidden behind it.

The Lenovo ThinkPad X1 Fold is very unusual in terms of design. It will take some time to get used to it and choose an optimal position in different situations. The materials, assembly and appearance did not cause any complaints. The MIL-STD-810G certification is worth mentioning as a useful bonus.

How easy is Lenovo ThinkPad X1 Fold in operation?

The Lenovo ThinkPad X1 Fold has a number of quite logical and obvious usage scenarios. The gadget can be used as a large tablet with a 13.3-inch screen: you can use it to check emails/messengers or just watch movies. Especially since the hinged stand will allow you to put it down instead of holding it in your hands. For more serious tasks you can either use a small laptop mode with a keyboard installed on one of the halves (suitable for limited space (airplane, for example)), or in the unfolded mode somewhere in an office or at home.

The main difficulty lies in the keyboard with the touchpad. The engineers had to make it small. Accordingly, the layout, the size of the buttons, the distance between the buttons, and the stroke of the buttons suffered. For some buttons there is no space at all and they work via Fn. While using it (about a week), I failed to get used to the keyboard and type fast. For small amounts of text (to answer emails and messages) it is enough. But for large texts - very questionable.

The Lenovo Fold Mini Keyboard itself is very thin. A two position power switch, LED indicator and MicroUSB for charging are additional elements. This solution may seem strange, but in fact there is no problem. This is rather an auxiliary charging option: the keyboard supports wireless charging and is charged when it is in the Lenovo ThinkPad X1 Fold in the folded mode.

The touchpad has good coating and level of sensitivity. Multitouch and gestures are supported. Nevertheless, due to its very small size, it is not very comfortable to use the touchpad: your fingers keep slipping outside of it.

It's also worth remembering that the display is touchscreen and that it comes with Lenovo's original Lenovo Pen Pro. It is very similar in size and shape to a standard pen, so it is convenient to use. It goes without saying that there are 4096 degrees of pressure and the inclination of the pen in relation to the screen. There is a Type-C connector for charging.

In a home or office environment, a mouse and a full-size keyboard can be connected to the Lenovo ThinkPad X1 Fold, making it more familiar to interact with the product. But the equipment has to be with Bluetooth. Or you can get a Type-C hub to connect everything you need.

The Lenovo ThinkPad X1 Fold has a flexible 13.3-inch OLED display with a rather unusual 4:3 aspect ratio and a resolution of 2048x1536. The screen looks similar to quality OLED displays in smartphones: maximum viewing angles, very vivid colors, and excellent contrast. The Lenovo Display Optimizer firmware allows you to use a variety of color display profiles, including the ability to link them to specific applications.

The manufacturer claims 300 cd/m² brightness. Colorimeter measurements showed 284.373 cd/m², very close to the claimed figures. The color gamut is much wider than standard sRGB, which is usual for OLED displays. The display is calibrated very well: the color temperature, as well as other indicators demonstrate very little deviation from the reference values.

What about performance and battery life?

Taking into account the form factor, it would be strange to expect super-efficient hardware from the Lenovo ThinkPad X1 Fold. A rather exotic system on the Intel Core i5-L16G7 chip of the Intel Lakefield family is installed inside. These are hybrid processors for ultraportable devices. This processor is five-core, with a base frequency of 1.4 GHz and Turbo Boost to 3.0 GHz. It is produced by 10nm process technology and has integrated Intel UHD Graphics with a base frequency of 200 MHz and a maximum frequency of 500 MHz. The RAM capacity is 8 GB LPDDR4X-4266 MHz, there are no other options. As for wireless interfaces, there is Wi-Fi 6 and Bluetooth 5.1. There are also versions with support for mobile networks.

As you might have guessed, the setup is suitable for working with documents and watching movies. We are not talking about any heavy games or graphics work. On the whole, Lenovo ThinkPad X1 Fold copes with its main tasks. Though the overall slowness is felt a little bit, if compared to laptops with processors of standard "ultrabook" models. The difference is minimal, but it is there.

Our review sample is equipped with a 256GB NVMe PCIe 3.0 SSD from Toshiba:

The Intel Core i5-L16G7 is a very energy efficient processor and the cooling system is almost never audible. Apparently, the fan runs only at maximum loads. For example, in the AIDA64 stress test. At the same time, the processor doesn't overheat, doesn't throttle, and the noise of the fan can be heard only if you bring your ear close to it.

The Lenovo ThinkPad X1 Fold has a 50Wh battery. Rapid Charge is supported: from 0 to 80% in an hour. In terms of battery life the situation is not the best: in office mode with Wi-Fi connection, browser and work with documents you can get about 5 hours of work.

The Lenovo Mode Switcher for shifting between modes of displaying information on the screen and splitting into two windows can be distinguished from the unusual pre-installed software. And Voice Commander. The name speaks for itself: voice control.

The usual Vantage application for all Lenovo laptops is used for all settings:

3 things to know about the Lenovo ThinkPad X1 Fold: