Although projectors began to be used as home theatres a long time ago, laser projectors have only now become really popular. There are 2 reasons for this:

- Increasing the physical diagonal of televisions is either impossible or expensive
- Laser projector technology, on the other hand, has taken a leap in the last few years

Samsung The Premiere SP-LSP9T is a device that allows you to increase the picture diagonal up to 130 inches for the price of a good 75-inch TV. At the same time it has all the necessary set of technologies for this: support for 4K resolution, extended dynamic range and the icon of modern TVs - the SmartTV package. The use of triple laser with a short focus allowed to achieve high brightness performance (the key projector parameter) of 2800 ANSI-lumen, leaving no chance to the competitors. For which it receives the Author's Choice Award. 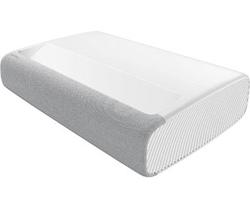 Home cinema projectors in general, and laser projectors in particular, emerged as a desire for a "full-wall" image. Of course, the projection cinema at home brings us even closer to the "real" cinema, but this is more of a side effect - it can hardly be called the key users demand.

In the past, projectors have always lacked something. At first it was brightness and you had to darken the room in the daytime, then the resolution of the picture, because at first FullHD-models were expensive. Then 4K came along and projectors started to lag behind the cinema audience again. Now it seems that we have passed the technological barrier, whereby projectors have reached the set of features customers demand.

Samsung The Premiere projector was introduced at CES 2021 and it is one of the first projectors with a very successful set of features. This is a laser projector with 4K resolution. We studied in more detail Why a laser projector is the best home theater solution. It is short-focused, which allows you to put it close to a wall or screen. The required distance starts at 4.3 inches (11 cm). It can even be moved to another room if necessary. Fixed projectors are typically placed under the ceiling and they require complicated wiring. Finally, it uses a triple laser, which provides increased brightness and clarity. Couple this with a built-in 4.2 speaker system with subwoofer and acoustic beam technology, HDR+ support and the SmartTV package, without which it is already impossible to watch TV at home, and you can understand why gg editorial staff were so interested in getting their own impressions of this novelty.

We have a separate article about what How to Choose a Laser Projector for Your Home in 2022. Those who are interested can study the issue in more detail. What do you need to know about Samsung The Premiere? It looks like a standard parallelepipid weighing 11.5 kilograms (that is, you can lift it without much effort, if you are not a child). The size is 67x50 centimeters, i.e. there is enough hand coverage to grasp it comfortably. Since it is a short-focus model, the projector lenses are on the top front of the projector. Of course, the projected image is at an angle to the surface, so it initially compensates for all those geometric distortions (which are still accurately tuned in the settings). 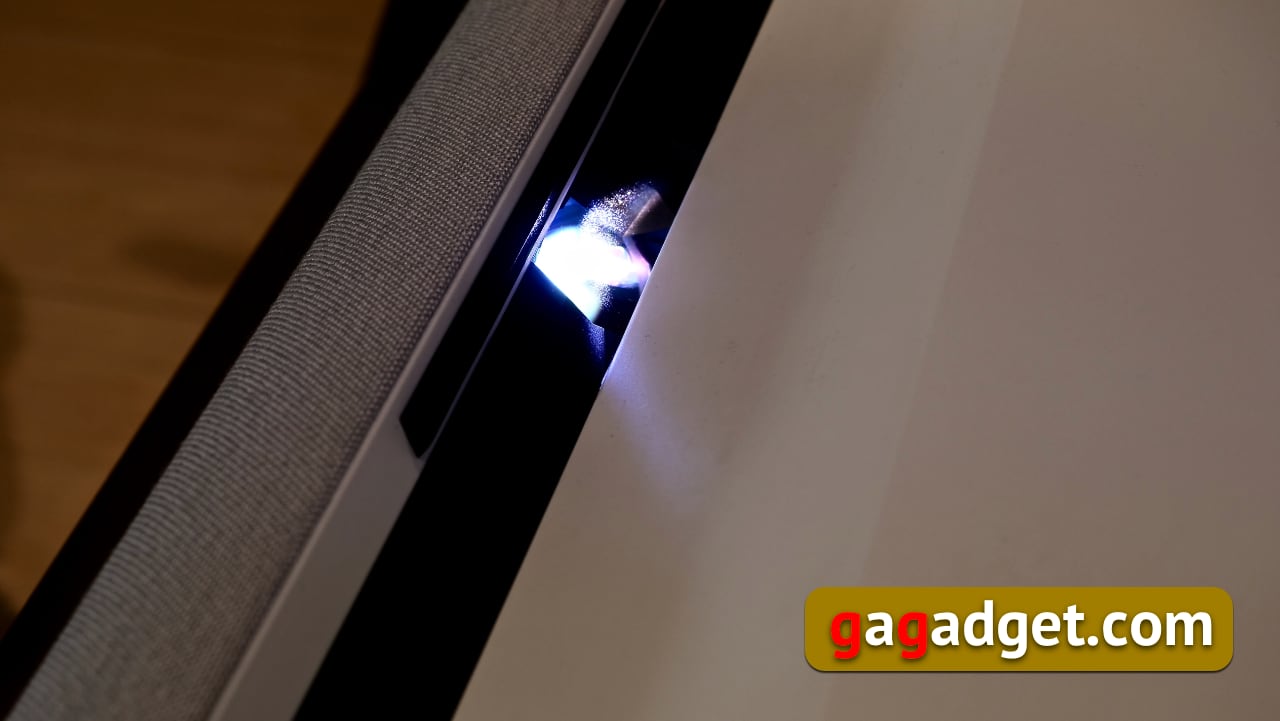 Samsung does not give any details on how the design is made. We can assume that it is as shown in the diagram below. There are three independent lasers. Each one gives off a different color signal (red, green and blue). Then the signal is fed through a system of light guides, lenses and prisms to the DMD chip (Digital Micromirror Devices). So it is a matrix with micromirrors similar to DLP. And then, through its system of lenses, the final image comes out. That is, the complexity of the device, first of all, lies in these precision components. And then the image processing and algorithms. And then the built-in acoustics, the materials used, and so on.

These pictures give you an idea of what the projector looks like. To the untrained eye, it probably resembles a huge printer with the working niche turned toward the user.

On the rear panel, facing the projection surface, you will find the connectors. From left to right: the power button, an optical output for connecting an external speaker ( if you have one), one USB 2.0, three HDMI ports (the first with eARC support), an Ethernet connector, and connectors for the satellite tuner and antenna. The version of the HDMI specifications is not announced, in practice this means that we are talking about version 2.0, in the case of HDMI 2.1 manufacturers in 2021 do not hesitate to declare it explicitly.

The projector menu is the same as that of televisions as far as settings are concerned - there is room for experimentation lovers. What causes genuine excitement and respect - is the geometry settings, where you can change not only by 4 corners of the screen, but also by 15 points (2nd snapshot) inside the settings panel. Separately, you can check the geometry by circles.

There are really a lot of settings, to list them all, perhaps, makes no sense here, the buyer will figure it out himself or, on the contrary, will not want to bother and leave everything by default. But it is worth knowing about some peculiarities of the settings, which, for example, TVs do not have.

For example, a projector can be mounted under the ceiling. And for this placement option, there is a corresponding image reversal.

There is a separate high altitude mode - it is designed to protect the projector from overheating in conditions (!) of high altitude. What if you want to use it in your hunting lodge in the Alps (not a joke at all, by the way).

Synchronizing with the Screen

Of course, there are brightness, contrast, clarity and color settings. It is possible to manually adjust the red and green tones.

Although this projector is capable of projecting an image simply on the wall, the manufacturer fairly states that the best results can only be achieved with the use of screens. Indeed - to spend more than $7,000 on a home theater projector and save a thousand on an adequate screen for it seems inconsistent. We have a separate Best Projector Screen Material Review 2022, and it will help you understand the issue. There are wall and floor screens, motorized and so on - it's a whole different world. But this projector, you ideally need not a simple screen, but a screen with an ALR-canopy. Keep that in mind when buying a projector.

For those who want to know more: ALR screens

ALR (Ambient Light Rejection) is a kind of screen that effectively reduces light streams from light sources (luminaires, natural light) and blocks the so-called stray light. There are ALR-screens designed specifically for short-focus projectors. Such screens are based on polymeric materials (PET, TPU) with special coating.

What Samsung The Premiere Projector Can Do

If you activate your Samsung account, you have access to streaming video apps (Netflix, Amazon Prime, Apple+ Disney+, and others). The app access menu is surprisingly simple and easy. There is also a quick access to the settings, allowing you to select the viewing mode ("Movie" mode and a special FilmMaker mode). Generally speaking, the FilmMaker mode disables all image processing algorithms, leaving the picture as the director created it. At the same time, it can complement the dynamic range enhancement technologies (in our case, HDR+). By the way, The Premier is the world's first projector to support FilmMaker Mode.

It is clear that in the evening the image is bright and rich. And the most important impression of viewing is the absolute impression of a movie theater, if you sit in a comfortable chair just a few meters away from the screen. The size of the picture just overwhelms you and creates the full illusion of being in a cinema hall. In daylight, of course, the image is no longer as bright, I would say that it will lose in brightness and richness of colors to the best technology TVs - OLED and QLED. But I must admit, this does not upset or reduce the pleasure of watching it at all. Although, I'm sure for some of the potential buyers this will be a reason to refuse to buy (or rather they will talk themselves out of it). But take my word for it, I constantly caught myself while watching it thinking that I'm sitting in a cinema, so new is the feeling of watching a movie on a huge screen. I guess you can get used to it with time. But once you switch to a projector in your home theater, you will never go back to a TV. And buying a projector does not in any way cancel the presence of TVs in other rooms of the house. It is just that the projector screen becomes the main screen in the house.

I was satisfied with the sound as well, and as with modern TV sets I could not bring myself to turn the sound up to maximum - it is too loud. The sound beam technology did not strike me as something special to the ear. But you can see how it works in the illustration from Samsung's website: 22 holes directed in three different directions should form a three-dimensional acoustic picture. And the built-in subwoofer, of course, adds bass (gunshot claps in blockbusters bang almost like in a "real" cinema). 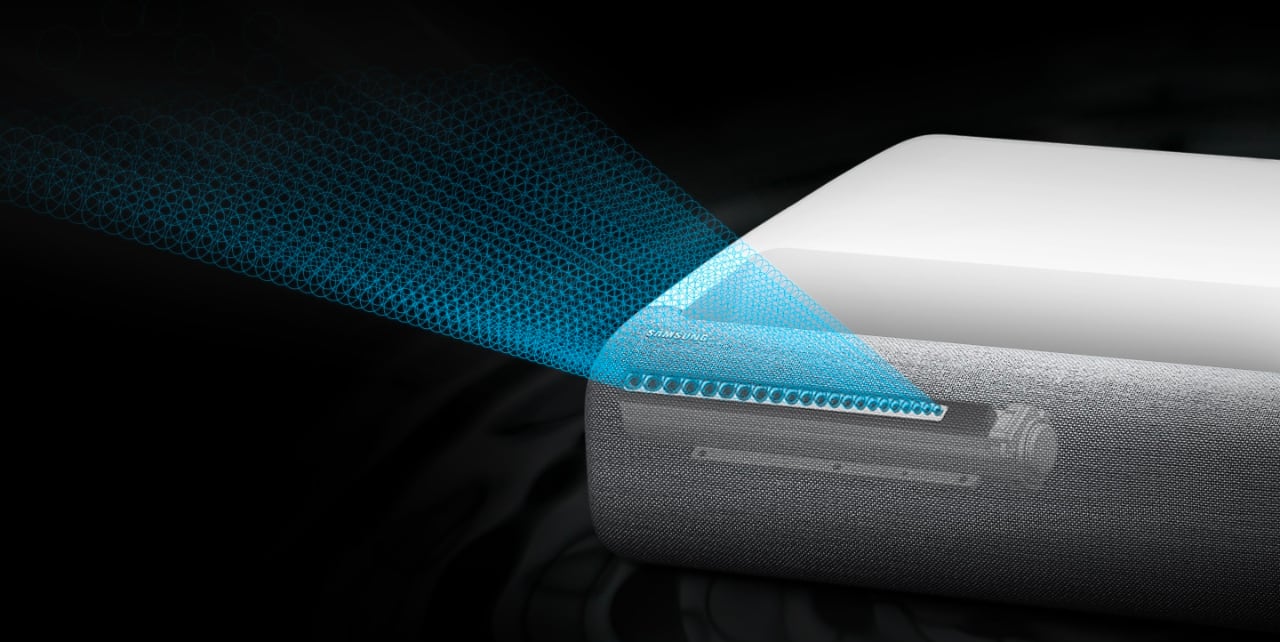 The Premier's remote control looks the most ordinary way, although you would expect it to have solar panels in relation to the 2021 TV lineup. But it has a handy, curved shape - if you hold it in your hand, your thumb rests just on the round joystick button. The buttons for volume change and channel switching are made in an unusual way. In the photo it looks like a rocker button, but in fact these are two sets of keys - toggle switches, slightly protruding over the body of the remote control. And they move up and down each.

Samsung the Premier vs Competitors

Currently, there are two models of The Premier series projectors on the market. They differ in price twice as much. The top model, the SP-LSP9T, differs from the SP-LSP7T in having the triple laser, which adds a 1/3 more brightness, and a 40 watt 4.2 speaker system versus the 30 watt 2.2 speaker system of the junior model.

The natural question is: Is this difference worth paying double the amount? The answer to this question depends not on the devices themselves, but on the buyer's wallet.

If you are thinking about buying a 85" TV, it is worth paying attention to such a projector. Especially if most of the time you will be using your TV to watch movies. And buying a junior model does look comparable to buying not the biggest TV today, since its brightness, although less, but not critical, still 2000 lumens is really a lot. 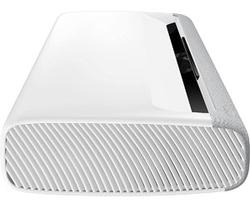 If you look at the competitors, there are only a few laser short-throw projectors with 4K resolution on the market. LG HU85LS and Epson EH-LS500B are among them.

The main competitor for the junior model of The Premier today is MiJia Mi Laser Projector 4K - a Xiaomi model with the price almost half as much. But it is predictably inferior to Samsung in brightness, sound and lack of Smart-package. And Samsung The Premiere LSP9T top model has no competition at all on the market today.

5 Things to Know about Samsung The Premiere LSP9T Projector 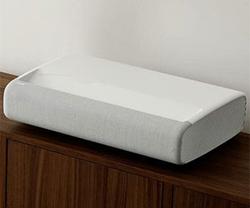