Choosing a projector is not an easy task, because you need to understand a wide range of features, functions, types of light sources and other device hardware. Today, the traditional incandescent projectors have been joined by modern technology: LED and laser "lamps". LEDs are not very bright yet, but thanks to their compact size and low power consumption they are well suited to portable devices. Lasers are now ready to replace today's highly efficient lamps, moreover, the life of such a light source is several times longer than that of a lamp. In this article we will take a look at several modern best laser projectors built with a laser light source and find out their strengths and weaknesses.

South Korean corporation Samsung entered the market of projectors by loudly announcing itself with a high-level model, The Premier. The manufacturer tried to equip its projectors with all the functionality available for home devices. "The heart" of the device is a system of lasers, which emit light in three colors and DMD matrix, the physical resolution of which is 3840 × 2160. The brightness of the projector in maximum mode is 2800 Lumens. This is a great value if you want to use the projector in a non-darkened room or in daylight.

In case you are ready to sacrifice some features and save some money, Samsung has a simplified model of the projector: SP-LSP7T. It also has support for 4K and all branded advantages, but has less brightness - 2200 Lumens (which is quite a lot) and a compromised sound system - 2.2, the power of which is 30 W.

You can learn even more about this projector in our review - Samsung The Premiere SP-LSP9T 4K Laser Projector Review: A True Home Theater

Optoma CinemaX P2 is an ultra-short throw projector that is great for the living room. It has a good brightness level of 3000 Lumens and a high dynamic contrast ratio which can reach 2000000:1.

The unit is made with 0.47″ DLP matrix and color wheel, which consists of six segments. The resolution of the matrix is 3840×2160. High-quality image display is achieved through the support of color space DCI-P3 and support for HDR10.

On the front side of the device there is 40 watt acoustic system which consists of four speakers, two of which are low-frequency. The projector supports Dolby Digital 2.0 codec. The analog audio output on the rear panel can be used to connect an external subwoofer without using receivers and adapters. Apart from 3.5mm Mini Jack, there are HDMI 2.0, one of which supports ANC, USB 2.0, LAN and S/PDIF audio outputs on the rear side of the projector.

Ultra-short throw projectors are a fairly new class of device that is quickly gaining popularity due to the convenience and ease of installation. You do not need to find the best place in the room, screw the bracket to the ceiling and do the calculations. It's enough to install a screen and place the projector underneath.

LG HU85LA has no color wheel in its design. In contrast to conventional DLP projects it is based on a three channel laser technology which provides a wide color gamut and color brilliance. The service life of the laser light source can reach 20000 hours. 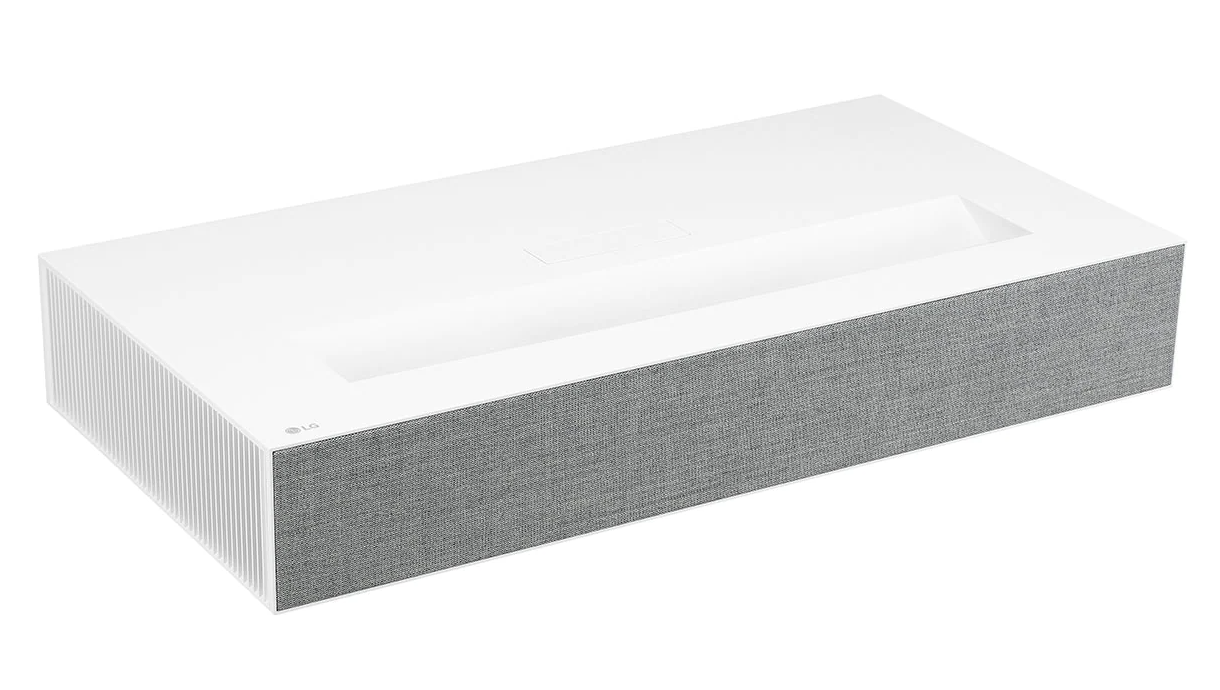 In order to level out distortions, the optical system of the projector is equipped with an alignment system of 12 independent points.
The device is equipped with a DLP matrix from Texas instruments with 4K UHD resolution, which equals 3840×2160 pixels. The brightness is high enough for home use, it is equal to 2700 Lumen - no need to worry about dark curtains on the window. The dynamic contrast stated in the characteristics of the projector reaches the value 2000000:1.

The projector body is quite massive: 26.8"×5.0"×13.7", it weighs 27 lbs, the front side contains a stereo speaker system with power of 10 W, projection lenses are on top. On the back side you will find following interface connectors: 2×HDMI, LAN, 2×USB 2.0, USB Type C, S/PDIF and digital TV tuner input.Item

A compact solution from Epson, the EF-11 is a very tiny projector, measuring 7×18×18 cm and weighing only 1.2 kg, you can literally carry it around in a small city backpack. To a party to show clips on the wall or on vacation to watch your favorite TV series in the evenings - anywhere.

Brightness in standard mode is 1000 lumens and 500 lumens in economy mode. Contrast ratio is 2500000:1. The device's matrix is 3LCD, which gives it an advantage in color display quality and brightness level.

The maximum projection size can be up to 150 inches diagonally, but at that brightness level, viewing at that diagonal can only be comfortable in total darkness. This brightness will be comfortable to look at on a 100" screen.

Built-in sound is not very powerful, it is only 2 watts, which is enough for such a miniature device, otherwise you can connect an external wired speaker.

The device allows you to play content from your smartphone screen using Miracast technology. The set of connectors is not wide, but enough: HDMI, USB 2.0 type A, USB 2.0 type B and 3.5 mm mini jack line output.

Best for office use

Optoma ZU-406 is a great device with a large brightness margin, up to 4500 lumens. In addition to brightness, the projector boasts a high contrast ratio of 300000:1. The resolution of the matrix is high 1920×1200, which will be enough for any office needs. The device has support for HDR10 and HLG, allowing to extend the dynamic range, which in a place with a matrix supporting FullHD-video allows you to use the device not only for business purposes, but also for entertainment, it would be especially important if the device is purchased not for the office, but for school class or club.

The diagonal of the projected image can be up to 300 inches. The projection distance of the device can be from 3.3' to 25.5', and you can also use the 1.3× optical manual zoom to adjust the image.

For audio, the projector has two 15-watt speakers. To connect the device to video sources at the back end of the case there are two HDMI ports, two VGA for video input and output, composite RCA. There are line input and output audio signals. The connectors are: a USB connector for 5 volt power output, RS-232 connector, 12 volt trigger and Ethernet.

Epson, too, did not stay away from the trend of laser UST projectors and presented the model Epson EH-LS500W. Thanks to the light source with brightness of 4000 lumens you can call it the best projector for daylight hours. Unlike most competitors with DMD-matrixes Epson projectors use 3LCD system consisting of three LCD matrixes: red, green and blue, which positively affects the quality of colors. Dynamic contrast ratio can reach 2500000:1, which is also a very good indicator.

The physical resolution of the matrices is 1920×1080. However, with the help of "Pixel Shift" technology, the projector displays a picture with 4K resolution. The projector has support for HDR10 and HLG. Thanks to the high brightness, the device can show a very high-quality 3D picture and level out the loss of brightness, which is inevitable when using 3D glasses. However, 3D is played only with a resolution of 1920×1080.

Built-in acoustics - two 10-watt speakers. As tests have shown, with the purchase of the projector you should immediately buy a third-party acoustic system, if you do not have one. Built-in acoustics for home theater will be not enough.

In addition to all of the above advantages, Epson EH-LS500W has one more and it is significant: low response time, which is only 16 ms. This makes this projector one of the best solutions for gaming. 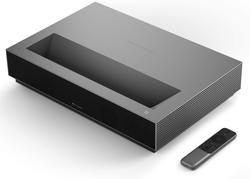 WeMax Nova is an ultra-short-focus projector from the famous Chinese electronics manufacturer, which is produced in alliance with one of the largest manufacturers of projection equipment, including professional, the Chinese company Appotronics.

The projector is inexpensive compared to competitors with similar functionality, but it will surprise you: a huge picture with a diagonal of 150 inches at a distance of several inches from the screen.

DMD matrix device has a resolution of 3840 × 2160, the maximum brightness reaches 2100 lumens, the contrast level is 3000:1. On the front panel of the device there are speakers with loudspeakers, their power is 30 W, and there is support for Dolby Virtual Surround. On the top cover there is a projection lens.

The operating system used on the device is Android TV 9.0 with a wide choice of applications and Google Assistant, which you can communicate with using the microphone built into the remote control.

The interface connectors are grouped on the back of the device: three HDMI 2.0, one with ARC support. Two USB 2.0 sockets. 3.5 Mini Jack for headphones, Ethernet and S/PDIF. For wireless connections, the projector features a dual-band WiFi 2.4/5 GHz adapter and Bluetooth 4.1.

How Do Laser Projectors Work?

Unlike the common lamp and LED projectors, laser projectors are different primarily because they use laser as a light source, which gives more brightness with slightly less power consumption, and several times longer life of the light source.

Other than that, the projection technology is the same:
- 3LCD with three different color matrices,
- DLP - based on a reflective DMD matrix, which using three lasers with different colors can get rid of the color wheel. The color wheel can cause the rainbow effect that some viewers notice.

How Far Should Laser Projector Be From the Screen?

The distance between the wall and the screen depends on the specific projector model.

Just like the more traditional lamp models, today's laser projectors have a feature called "Projection Ratio" which tells you how far away from the screen the projector should be to create the desired diagonal image.

How Much Power Does a Laser Projector Use?

Laser projectors have the same power consumption as today's projectors with a high efficiency UHE lamp of similar brightness. Depending on the mode, it will be 250-400 W for a projector with 3000 ANSI lumens.

What is the Lifetime of a Laser Projector?

Classic projectors with an incandescent lamp can last about 2,000 hours. More modern UHE lamps can last up to 5,000 hours when used in economy mode. At the same time, laser light sources can last several times longer - up to 20,000 hours. This is more than two years of continuous operation. If you use the projector for three hours a day, for example, we can talk about a lifetime of a couple of dozen years. And probably the device will become obsolete much faster and be replaced by a newer one before the laser has used up its life span.