ASUS ROG Zephyrus S17 GX703 review: a gaming laptop for all your money

The ASUS ROG Zephyrus S17 GX703 is a flagship gaming laptop for those who want maximum performance at the level of gaming desktops in a portable version. In addition to very powerful hardware, the laptop is very pleased with the excellent quality 4K display with 120Hz refresh rate, which is suitable for both gaming and work. Although if you want, you can also choose the QHD version for higher FPS in games. Also worth noting is a very comfortable optical-mechanical keyboard, a large touchpad, a quality audio system with 6 speakers and the availability of an impressive number of modern ports. An important part of the gaming notebook is a cooling system. In the ASUS ROG Zephyrus S17 GX703 it fully copes with its task, but at maximum loads it becomes quite noisy. The timing of the start of sales and the price is still in question. But it obviously won't be low. 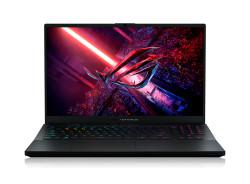 Apparently, the ASUS ROG Zephyrus S17 GX703 will be available in different bundles, up to the most "loaded" with a backpack, mouse and so on. But we have received the basic configuration. A big black box which contained the notebook itself, a rather impressive size power supply, a detachable power cable and documentation.

What about the look and design of the ASUS ROG Zephyrus S17 GX703?

ASUS ROG Zephyrus S17 GX703 has long used an unusual design in laptops with a raised top work surface. There are variants with an additional raised screen. The ASUS ROG Zephyrus S17, on the other hand, raises the keyboard when the notebook is opened. This is done to improve cooling of the notebook's powerful innards. Plus the keyboard in this position has a more comfortable angle to work. The notebook itself is made of magnesium and aluminum alloy, and the color is all black. And overall, the laptop doesn't look too flashy, unlike most gaming models. The desktop has a soft-touch surface. It is very pleasant tactile, but actively collects traces of use. The top cover is divided into two parts diagonally, like most Zephyrus models. The top has the ROG line logo and the bottom has decorative perforations.

Despite the very impressive hardware inside and the 17.3-inch diagonal, the notebook is quite thin: just under 2cm. The notebook has a decent amount of ports. Fromleft side there is a power supply socket, HDMI 2.0b, RJ-45 network interface, full-size USB-A 3.2 Gen 2, Thunderbolt 4, USB-C 3.2 Gen 2 (with DisplayPort and Power Delivery support), 3.5mm audio combo jack.

There are two more full-size USB-A 3.2 Gen 2 and an SD card reader on the right edge:

The laptop has ventilation holes on the rear end. Next to that, the top lid has a wide cutout that accommodates two of the six built-in speakers and LED operation indicators.

Two more speaker slots can be seen on the front.

The bezels around the perimeter of the display are quite thin, especially considering that this is a gaming model. At the same time, unlike some Zephyrus models, there is a webcam with microphones and it is located in the usual place.

On the bottom of the laptop there are air vents, two more speakers and massive rubberized feet for better stability on the table. The ASUS ROG Zephyrus S17 GX703 offers the option to upgrade the RAM and SSD storage. That said, in addition to the main M.2 PCIe NVMe drive, there's room for two more. The lower right screw has a special design that when unscrewed raises the lid for better access to the notebook internals.

The notebook is a reasonable size: 39.4x26.4x1.99 cm and fits into a standard notebook compartment in a backpack. At 2.6kg this isn't exactly the most comfortable weight to carry every day. But you have to pay for performance. The notebook looks and is assembled perfectly. The only illumination is a customizable RGB backlight that can be switched off or set to neutral white, so the ASUS ROG Zephyrus S17 GX703 won't distract your colleagues from your workflow.

How comfortable is the ASUS ROG Zephyrus S17 GX703?

As mentioned above, when you open the laptop, the keyboard lifts up from the display side by an angle of 5°. It's not a critical feature, but I found this position a little more comfortable than the usual horizontal options.

The layout in the ASUS ROG Zephyrus S17 GX703 is used full, though not quite standard. In general, the main block of keys is familiar: long Shift, single-storey Enter. But there is an additional number block, and between it and the main block are the Num Lock/Delete, /, * and - keys. And below that is a separate block of arrows, which is combined with Home, End, PgUp, PgDown. The features are not critical, but it takes some time to get used to them. Another cool feature is a multifunctional scroll wheel above the keyboard, which can be configured for different actions in the application. By default, this is the volume control and mute the sound when pressed. The power button is on the right side above the keyboard and is combined with a fingerprint scanner.

Special mention should be made of the keys. The notebook uses optical-mechanical switches with 1.9 mm travel, 0.2 mm actuation travel and a claimed lifetime of 100 million actuations. The keyboard feels a bit like a low-profile mechanical keyboard, and the action is much crisper than in conventional notebooks. On the whole, using the ASUS ROG Zephyrus S17 GX703 keyboard is very comfortable. There is a customizable RGB backlight for each button with AURA effect sync support.

The touchpad is claimed to be 25% larger than last generation. It's glass, has a nice matte finish and excellent sensitivity. Outside of gaming, it is really enough for comfortable work and there is no need to connect a mouse.

In Armoury Crate you can select one of the existing picture presets and manually adjust the color temperature. If necessary, you can calibrate the display yourself, but only one model of calibrator is supported X-Rite i1 Display Pro:

Visually, the screen is of excellent quality, both in detail, viewing angles, saturation of the picture, and brightness. Separately, it's worth noting that even the Windows interface feels nicer at 120Hz. Maximum brightness was 477.111 cd/m2, blackfield brightness was 0.498 cd/m2 and contrast was 958:1. The calibration is also good. The color gamut is slightly wider than sRGB, and all metrics (including color temperature, color components) have very little deviation from the reference values:

What about performance and battery life?

The ASUS ROG Zephyrus S17 GX703 uses the new performance Intel Core i7 and i9 11th generation Tiger Lake processors. Our configuration features Intel Core i9-11900H. This is an 8-core, 16-thread processor that is manufactured using the 10nm SuperFin process technology. It has a base clock speed of 2.5 GHz and a maximum speed of up to 4.9 GHz, a Layer 3 cache of 24 MB, and a TDP of 45 W. It features Intel's UHD integrated graphics processor with a base clock speed of 350 MHz and a maximum clock speed of 1.45 GHz. The NVIDIA GeForce RTX 3080 Laptop runs with it at up to 1645MHz and 16GB of GDDR6 memory. There is 32GB of DDR4-3200 RAM. Of that, 16GB on the motherboard and another 16GB slab in the slot. The maximum amount of RAM is 48GB.

ASUS ROG Zephyrus S17 GX703 shows impressive results in synthetic performance tests. Which is quite expected with such a stuffing. In terms of power the notebook is on par with advanced gaming desktops:

Cooling is provided by Active Aerodynamic System (AAS) Plus air intake system (which includes a raised keyboard), six heat pipes, two Arc Flow cooling fans with 84 blades each and four radiators. And Thermal Grizzly's Liquid Metal is used as the thermal interface. An impressive set, but the hardware in the laptop is pretty hot, too. As AIDA64 stress-testing shows, even under continuous maximum loads the temperature of the insides does not rise above 80°. Accordingly, no trotting is observed. But the case itself becomes warm and the CO starts making noticeable noise. Though it can't be said that the notebook is noisier, than other gaming models.

In our configuration we've got the maximum number of drives installed. In this case, three Samsung PM9A1 terabyte models are used. These are M.2 NVMe drives with PCIe Gen4 x4 interface. They are combined into a RAID array.

The drives show impressive performance in both read and write speeds. This speed cannot yet be achieved by a single SSD, even with the PCIe Gen4 x4 interface:

4K screen is not ideal for gaming. Nowadays even the most powerful hardware is struggling to play demanding games in 4K resolution. Despite this, we decided to play games in native resolution with the highest possible graphics settings (including raytracing). Metro Exodus shows almost stable 60 FPS. In Gears 5 it ranges from 65 to 80 FPS. Cyberpunk 2077 runs at an average frame rate of 35 FPS. The Ascent is about the same 35 FPS (release version without patches).

Audio quality is not usually a strong point of laptops. But in this case, there's something to tell. The ASUS ROG Zephyrus S17 GX703 has as many as 6 speakers that are placed throughout the chassis. The notebook sounds really convincing, both in terms of volume reserve and sound quality. Yes, not a Hi-End audio system, but you can even listen to music from your laptop, something most laptops can't boast about.

The ASUS ROG Zephyrus S17 GX703 is powered by a 90Wh quad-cell battery. The autonomy turned out to be very good, as for such a powerful gaming laptop with a big screen. In office mode (Wi-Fi, browser, documents, low brightness) it holds about 5 hours. Of course, when running on battery power, the laptop switches to the integrated video accelerator. From the included PSU at W the notebook charges in just under 2 hours. There is still a 100W compact PSU with a Type-C connector in the wild. It will come in some bundles. It will come in handy for office use of the laptop.

Dual band Wi-Fi (with Wi-Fi 6 support) and Bluetooth 5.2 are available for connecting to the outside world. Plus, don't forget about the availability of wired Gigabit Ethernet. To configure the laptop, the familiar application Armoury Crate is used. Here you can choose the notebook operation modes and the cooling system, monitor the system status, set the keyboard backlight, check for updates, etc.