LG XBOOM Go series of loudspeakers impresses with their technology. You can enjoy control via a mobile app, color music settings and simultaneous operation of up to a hundred speakers, as well as a good sound, which for some reason is hidden behind the magic Sound Boost button. It is the bigger model XBOOM Go PL7 that seems the most attractive, with a power bank function and the maximum set of features.

A series of portable Bluetooth speakers including small, medium and large models with 5, 20 and 30 watts respectively. All three have the ability to pair with another device in the series, and the two larger models can be interconnected to network up to 100 speakers. The PL5 and PL7 versions feature customizable LED backlighting. PL7 can also operate as a power bank. All speakers are IPX5 water resistant. 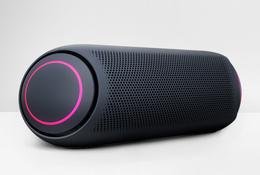 What's in the Box?

The package contents are identical to those of all speakers in the series. It includes the device itself, a USB cable for charging and documents: manual, warranty and safety booklet. There is no charger in the box, you can use any standard charger you already have.

At first glance, it is clear that all three speakers are related. They are common in their smooth cylindrical shape with a characteristic grille on the front and round diffusers on the sides.

The junior model is the most compact. It is available in several colors: black (as in our photo), white, yellow, green, and pink. In reality, black looks more like a very dark blue. The two round elements on the sides of the XBOOM Go PL2 are more of a decorative nature: they are, unlike their senior models, fixed. At the top of the device there is a control panel with a number of rubberized buttons: power, pairing, volume control, play-pause and Sound Boost. On the back of the speaker, you can see the textured logo and the large XBOOM name. There is also a hole for the strap, this feature is characteristic only for the smaller model, as the most portable of the family. The bottom side has a flat surface with a non-slip rubber pad. 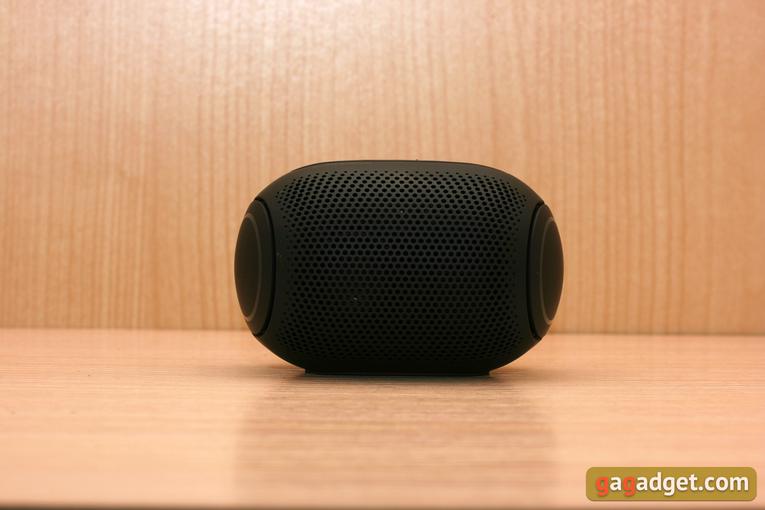 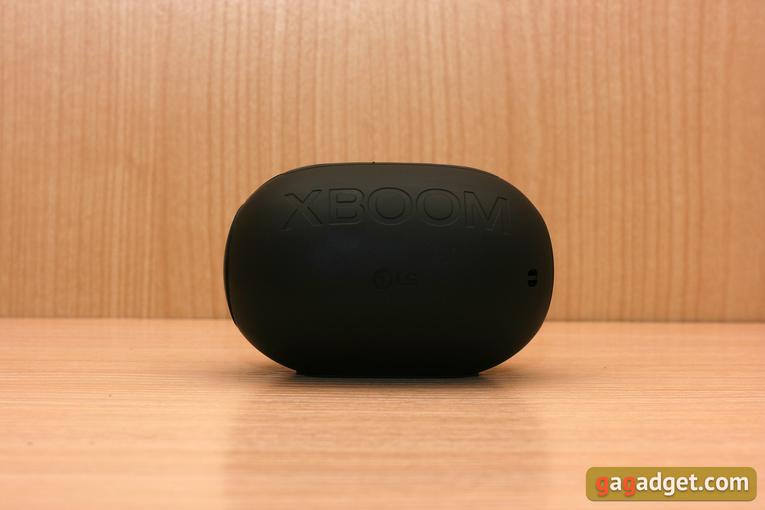 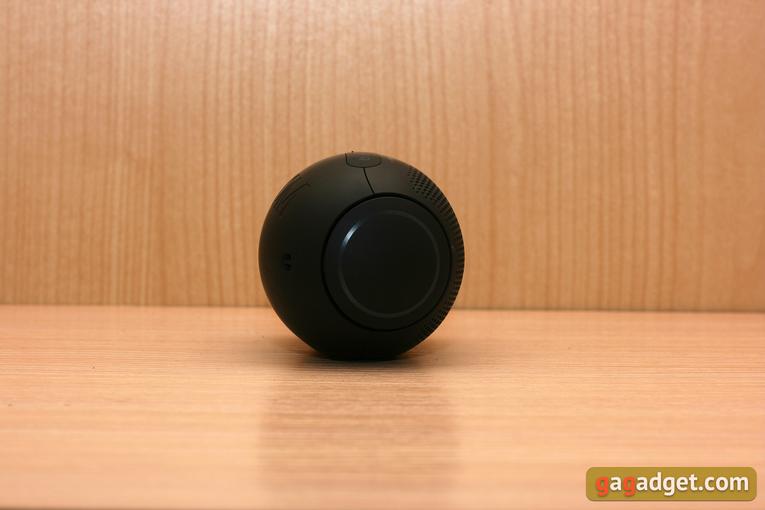 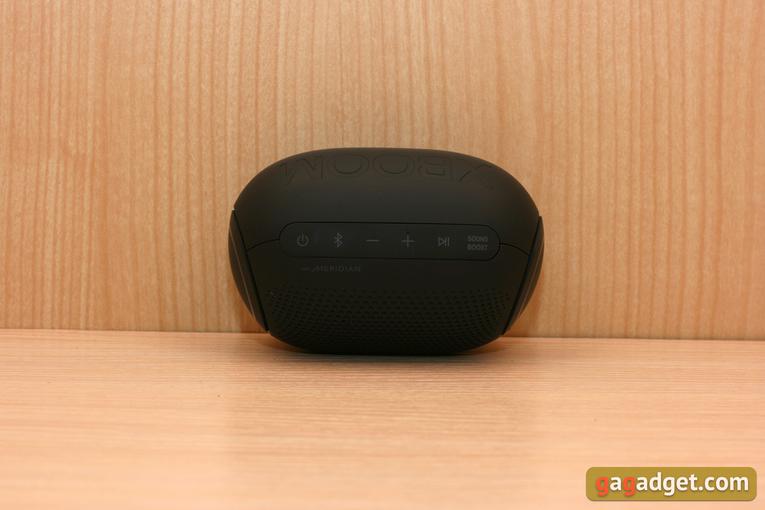 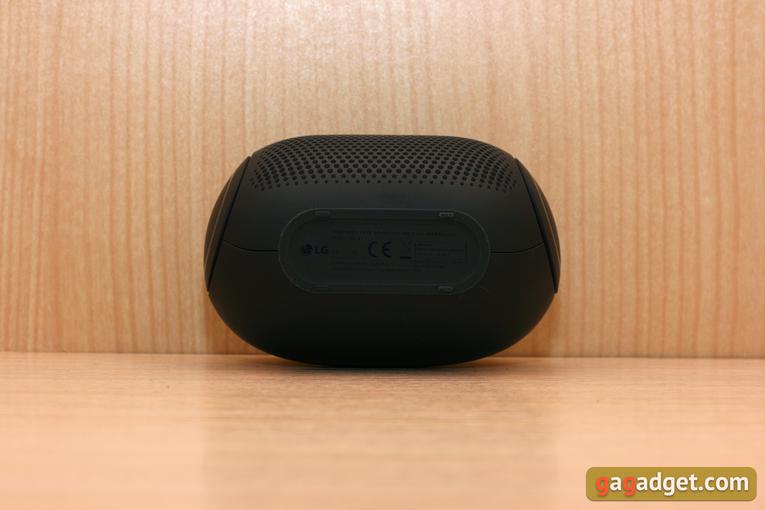 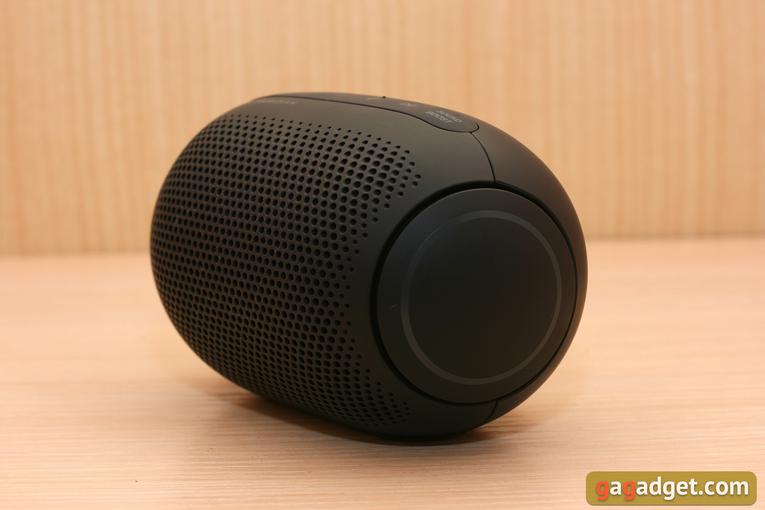 Under one of the sides you can find: a USB-C charging port, a 3.5mm line input, and a pair mode button. The cover of this compartment looks well protected against moisture, just like a starship hatch.

The PL5 and PL7 can be found in black or white. LG XBOOM Go PL5, unlike its smaller relative, is not only bigger, but also differs in many details. The circles on the sides are not just for beauty, they are moving elements that noticeably vibrate when you work. The stripe around each diffuser is also not a designer's fancy - it is a detail of the LED backlighting. The differences on the top panel with buttons are minimal compared to the smaller model and are reduced to the appearing battery charge indicator. On the back, behind the LG logo, under the powerful rubber cover there is another control panel. There are the steam and multi-mode power buttons, the backlight button, the reset button hole, the USB-C jack and the 3.5mm AUX port. The protective cover is attached to the case with a thick rubber band, the design looks very reliable. 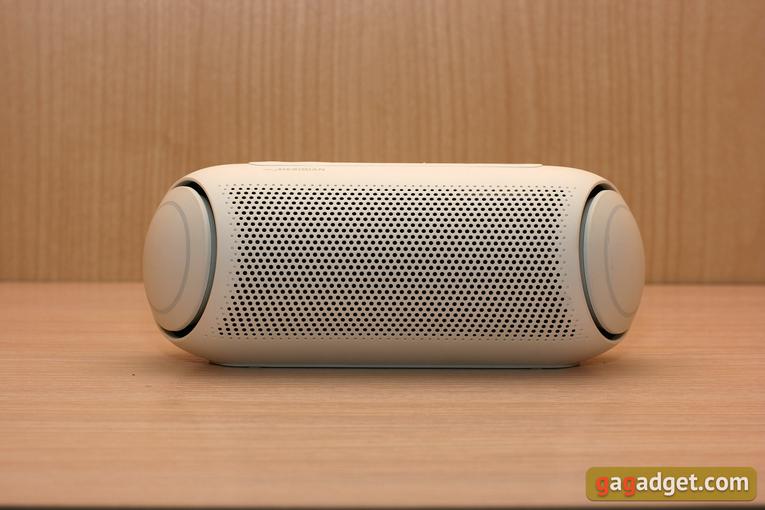 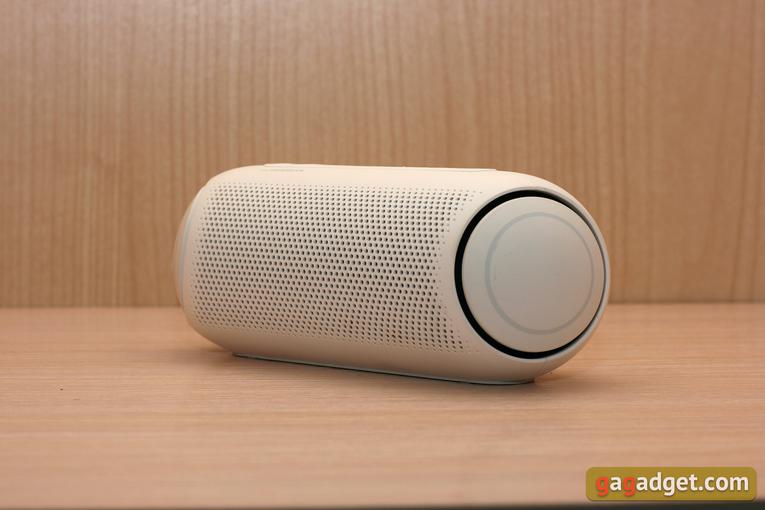 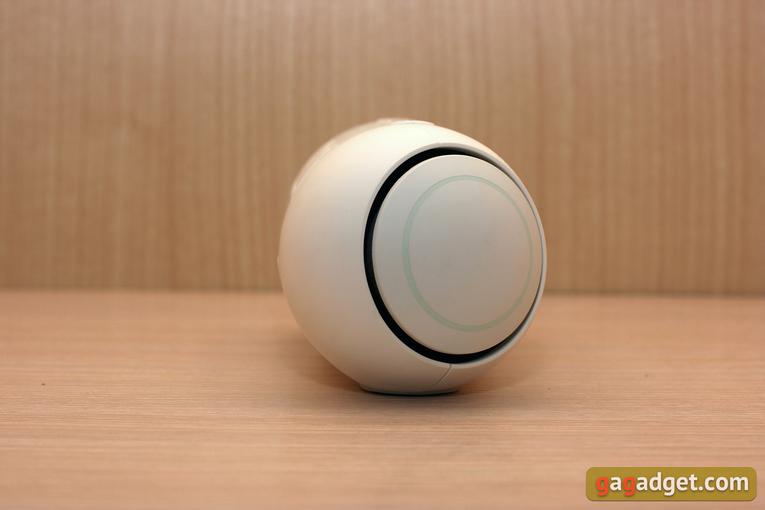 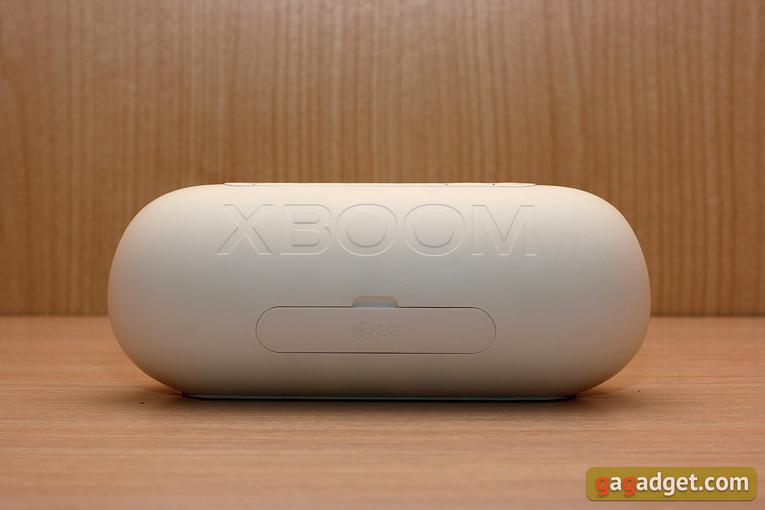 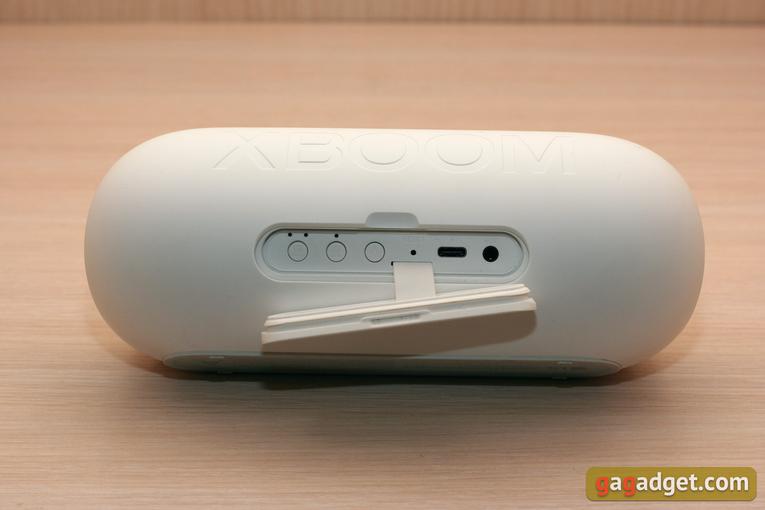 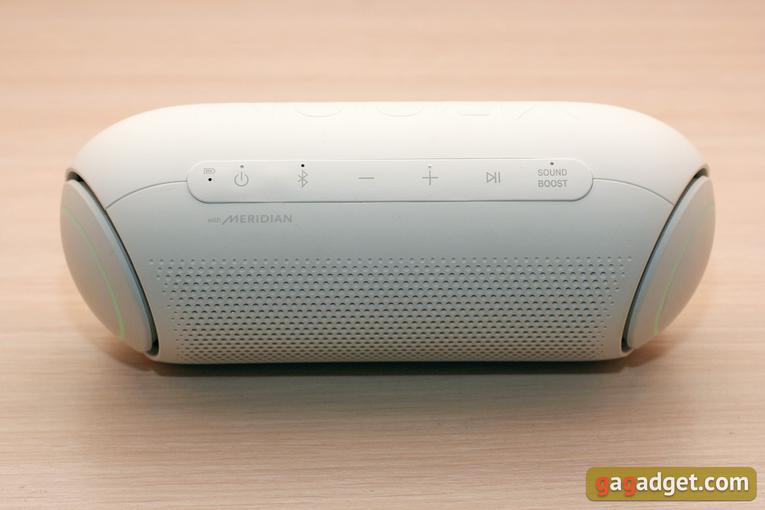 LG XBOOM Go PL7 is the largest speaker in the series - 3.3 lbs (1.5 kg) of weight, solid, steady and impressive. Externally, except for the size, it is very similar to the PL5. It has the same side diffusers, LED backlighting, a rubber panel with buttons on top and another one under the lid on the back. However, on the back there is one more element: a USB-A port for using the device as a mobile battery and charging other gadgets from it. The case, as well as other models, is pleasant to the touch: it is usable, non-marking matte plastic with a slight soft touch effect. 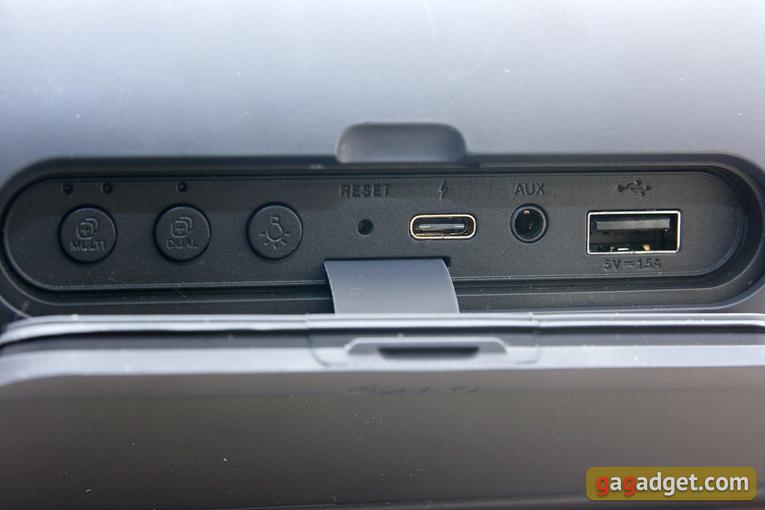 All the speakers look sturdy and solid. The only complaint is the potential instability. This almost doesn't apply to the heaviest PL7, but the lighter models can be knocked over. However, they will not roll away and will not suffer from overturning.

How to Сonnect and Сonfigure?

To connect your speaker to your smartphone or other Bluetooth-source, you should press and hold the pairing button, then select the appropriate device from the list of available ones (it contains the model code and numbers so as not to confuse several similar speakers). From then on, the speaker is ready for use.

The kit for controlling the speaker is placed on the top panel of buttons. With it you can adjust the volume and pause the music without touching the smartphone. By the way, with the same button (play/pause) you can also call the voice assistant, if you hold it for two seconds. A separate button turns on Sound Boost and leave it in such a position (why - I'll tell you below). This is the case with all three speakers. But the two bigger models have some additional controls on the back under the waterproof cover. The button with the bulb image is responsible for turning on and off the LED backlighting, a little later we will see how it is configured in the mobile application. The Dual button activates the dual-speaker mode (it is present in all three models). If you have two speakers and want to use them simultaneously, press it on both. A similar principle is used in Multi mode (only PL5 and PL7): one of the devices can be made master and the others slave with the corresponding button.

To get the most out of your speaker control, you need to download LG XBOOM mobile app for iOS or Android. It works directly with the device via bluetooth, so it doesn't require any cloud accounts. Here you can:

To switch from the speaker to the built-in smartphone speakers, you can activate by a characteristic gesture (shake your smartphone). You can also update speakers firmware.

The most noticeable feature of the XBOOM Go PL5 and PL7 is the dynamic RGB backlighting. It's difficult not to notice it when it's on, but when it's off, it doesn't show itself in any way. It is convenient when you want to avoid light effects. And when it is needed, you can not just turn on the illumination (there is a separate button on the back panel for that), but also adjust its behaviour in the mobile app. There are three presets available (Party, Water, Forest) and the ability to configure your own by selecting the speed and color scheme. You can also synchronize the dynamics of lighting changes with the music. It looks spectacular.

Once again I would like to draw your attention to the multi-playback function. More than once I had the desire to connect several Bluetooth speakers to one smartphone at the same time, and somehow I could not believe that there is no one universal solution for such a simple task. If you know it, then welcome to the comments, but here we have a solution that is not one-size-fits-all, but extremely easy to work with. Both XBOOM Go PL5 and PL7 can play together, but only the speakers of the same model work as a pair - that's how Wireless Party Link works, allowing you to connect up to 100 speakers simultaneously. Another interesting example of use is connecting two speakers to an LG TV as an alternative to a soundbar for surround stereo sound. By the way, there is a Multipoint function, and one speaker can be controlled from two devices at once.

By their appearance, rubberized buttons and plugs, one would assume that you can listen to the speakers almost under water. But this is not the case, the guaranteed level of protection is only IPX5. Which, however, is quite enough to protect against rain that suddenly falls on the party.

The larger model LG XBOOM Go PL7 has a function of charging other devices and a USB-A socket for their connection. However, the capacity of the built-in battery is relatively small, only 3900 mAh. For the speaker, of course, this is enough, but as for the powerbank it is a bit small, it is more of a backup solution than a permanent one.

The battery life of all 3 models tested differs in proportion to their size. The flagship XBOOM Go PL7 boasts 24 hours of battery life (a good figure, but that's with the backlight off, at half volume, and under otherwise favorable conditions). The PL5 and PL2 models have 18 and 10 hours of battery life, respectively. In real life the results are in line with the claimed performance, but of course it all depends on the conditions of use.

You've probably noticed that all 3 speakers have the Meridian logo on them. This is British company that has been making Hi-Fi equipment for over 40 years, and now they are applying their technology to some of the more mainstream products.

The collaboration with LG gave good results: the sound of all three speakers turned out to be quite spectacular. There is no magic button activating some secret Meridian technology, but there is a button Sound Boost. I suspect that it's needed just for demonstration of sound enhancement technologies. Because if you play with it several times turning it on and off you just leave it on forever. The sound immediately gets volume and coloring, it seems that the speaker has been replaced by another one, of higher class.

Dual Action Bass technology provides particularly expressive bass frequencies. The effect is most pronounced in the largest PL7 model. The body does a great job of suppressing vibration, but you can literally see the sound with your eyes thanks to the sides of the speaker.

A series of portable Bluetooth speakers including small, medium and large models with 5, 20 and 30 watts respectively. All three have the ability to pair with another device in the series, and the two larger models can be interconnected to network up to 100 speakers. The PL5 and PL7 versions feature customizable LED backlighting. PL7 can also operate as a power bank. All speakers are IPX5 water resistant.