The tops of the Chinese online platforms brands are increasing, the existence of which no one knew before. They make a good product and have already managed to earn a good reputation. These companies should take a closer look, and today we will tell about the manufacturer of mobile accessories Baseus.

The brand was founded in 2009 by Shenzhen Times Innovation Technology Co., Ltd. If you believe the official site  and the page in Facebook, Baseus word is derived from the slogan «Base on User», though sometimes there is another transcript - «based on us». Apparently, in the early stages of the search for the deeper meaning of the brand is not included in the list of priorities, and now we have to do afterwards. Chinese name is written as倍思( «Beisi»).

The team started with the release covers and protective films for mobile devices. Baseus active phase of growth came in 2012, when the brand came out on major online platforms in China and decided to explore foreign markets. Gradually, the range has expanded. Now line includes a variety of accessories and gadgets, from the charging cables and up to wireless headphones. In addition to its own R & D-department at Baseus there is a whole team that is engaged in quality control. The manufacturer is betting on design and practicality.

According to the company, after the opening of the brand store on AliExpress in 2016 they had to revise the global strategy, starting with the organization of the supply chain and ending the development of devices (as the customers requests from different regions often differ). As a result, they were able to achieve sustainable growth, and overstepped the mark in 2018. Accessory sales year of $ 700 000 per month. Our selection Baseus products will help you understand what a brand.

Popular power adapter is available in two versions: with two full-sized USB-port or USB + USB Type-C. Maximum power of 30 W can be obtained by using one connector. If use both, the apparatus produces no more than 25 W (5B / 5A). On a "normal» USB-output support fast charging technology Quick Charge 3.0, Samsung AFC, Huawei SuperCharge and MTK Pump Express. Model with USB Type-C also works with Quick Charge 4.0 and Power Delivery 3.0 standards. The latter allows you to quickly charge your iPhone X / XR / XS, 12-inch MacBook, the new MacBook Air and other thin notebooks.

At the same time cost to buy neat branded Baseus cables from USB to USB the Type-the C, Micro USB, or the Lightning. Owners of smartphones that support fast charging, will approach here so, and for charging via USB Type-C cable to other useful USB Type-C or the Lightning. If the house is already a lot of wires, the company has a handy organizer.

Himself the power supply is equipped with a euro and is available to order in black or white.

Baseus Simple Wireless Charger stands out from the other models of the upper transparent panel, which can be seen under the PCB. Charging is suitable for any Qi-compatible smartphones, plastic, silicone or leather case does not interfere with her work. When the device battery is fully charged, the dock will automatically go into sleep mode. There is a system of recognition of foreign metal objects and protection against overheating. Maximum power output is 10 watts.

If transparent charging will not send you to taste, Baseus also offers versions in black or white casing. Only the cable included in the package (that is curious, with connector Lightning). The power supply will have to be bought separately, and the need for quick charging with support for Quick Charge technology. For example, such a.

Car Holder Baseus Smart Vehicle Bracket Wireless Charger received several chips. Firstly, it is equipped with an automatic system of the phone lock. When you install a special infrared sensor is triggered, the mobile "feet" are reduced to the center and firmly grip the device on the sides. Get it as simple - you need to touch the touch buttons on the right side, and the terminals themselves apart. It is better to do so before the ignition is turned off, since the mechanism will not work without power.

In addition avtoderzhatel embedded wireless charging Qi power up to 10 watts. Some users have reported that it does not work when the phone is in your pocket. This applies above all Samsung models with the iPhone no such problems.

The accessory is available in two versions: with a deflector mounted on the ventilation, as the image is higher or c sucker. For fast charging needs power adapter Charge with the Quick, the kit did not put.

To arrange a convenient place for the phone in the car as possible and without any complicated designs with clips. The usual magnet holder consists of only two parts. The base is fixed to the deflector or other surface and to the mobile device body is glued special metal plate. Magnet powerful enough. Some cell phones are held even in a case, but given the state of our roads, to better ensure the reliability of direct contact with the ground plate.

The smartphone can be discharged at a time when there is no outlet. In that case, good to have on hand the laptop battery. Baseus Mini S Digital Display per 10 000 mAh does not take much space in your bag or backpack, its size is only 92x62x22 mm. To charge of pauerbanka can use Lightning port or a USB Type-C, which also operates on the return (5V / 3A). There are the usual USB-output with a maximum current of 2.4 A. Support Quick Charge is not delivered, is not here and Power Delivery Profile 9B (this means that the iPhone charging via USB Type-C with the appropriate cable is not as fast as we would like ). But see-through charge - can be connected to the network itself, and parallel battery charging him another gadget.

Your built-in display shows the charge level as a percentage, which is much more convenient to simply display LEDs. Effective capacity of the battery is 6100 mAh, enough for a pair of reel stands most smartphones. Sam Baseus Mini S Digital Display is charging a little more than four hours.

In modern devices is running out of connectors. For some, it will not be a problem, others have weight wrong adapters and adapters. If the laptop manufacturer has decided to limit ourselves to a couple of universal ports USB Type-C, and the need to connect the ordinary flash drives and display the image on an old monitor will not go away, will help solve the problem of USB-hub. The model is available immediately Baseus three ports USB 3.0, HDMI-interface and Gigabit Ethernet. Hub format "box on the wire" works with MacBook, laptops on Windows / Chrome OS and even some models of smartphones.

The device has a connector USB Type-C for the laptop power, but connected thereto powerful power supply is not recommended - hub body while significantly heated.

If we are talking about endangered ports, it is also worth mentioning adapter to 3.5 mm jack for connecting headphones. Remember how manufacturers Apple ridiculed for refusing to mini-jack, but then do the same? Today the "crutches" almost need for all the flagship devices. Baseus releases including compact adapters without cable, which are inserted directly into the power connector. Version with connector USB Type-C is compatible with most Android-smartphone, but not iPad Pro 2018. For Apple fans while there is only a model with Lightning. And here and there, you can easily connect a headset with a microphone for calls.

Adapters can simultaneously listen to music and charge your smartphone, only charging rate will be lower than with a direct connection.

Cost: $ 7. I want to buy to of Android-smartphone and for the iPhone!

Encok S06 - the most popular Bluetooth-headset in Baseus store. For the price they have good sound, though, the failure itself, support for more advanced codecs aptX LDAC and not talking. Members also noted the good quality of voice transmission through the built-in microphone. On one side is a control panel, the other - the charging part with the battery, nothing is outweighed in this arrangement. The headphones have magnets for the coupling during wear, though they hold weak. The manufacturer promises up to 8 hours of music, but be prepared for the fact that at maximum volume the work will be less.

The current version of the headphone is equipped with two pairs of silicone tips of different sizes, ear clamps, charging cable and carrying case with a zipper. A choice of three colors: black, white and bright orange with silver accents.

Fresh novelty Baseus Encok W01 added a module Bluetooth 5.0 and energy-efficient audio chip. One charge is enough for 6 hours of music playback. TWS-headphones received the charging case in the latest fashion, only with a battery in it left a mess. On some slides contains the impressive capacity of 2000 mAh, but then the text says nothing of 200 mAh. Someone accidentally attributed the extra toe. After a brief correspondence with the manufacturer revealed that the correct option - 2000mAh. This means that the autonomy model can outdo most of its competitors. This is the more interesting, although exact data on the number of chargers "droplets" in Baseus provided.

Headphones are protected against sweat and splashes, holding the single button voice assistant can be activated on the body. The current level of charge of the case is displayed by two LEDs, and is used to charge the Micro USB port. Reviews about the new product yet, but should at least add to favorites W01 - maybe they will surprise you more.

This baby is placed on the palm of your hand and plays loud enough for its size (although without too much bass). Bluetooth-speaker produces sound 3 W in the form of a cartoon dog. The control buttons are on the top, side - Micro USB port and a microphone for accepting incoming calls from your phone. In the box to the device put dual USB-AUX cable for charging or wired connection to the signal source. The battery provides up to 5 hours at 70 volume%. There are four colors: black, white, yellow and red.

Engineers Baseus embed wireless charging into everything what will get. Branded table lamp with docking station can charge Qi-compatible device (up to 7.5 W in the case of the iPhone, and 10 W for Android-devices), and can be found behind the USB-port with support for fast charging. Not enough unless the application for the settings via a smart phone. Everything is controlled using touch buttons. At the base there is a slider brightness adjustment (5 levels), and three buttons: the power mode switching warm / cold light, and the sleep timer after 40 minutes.

The angle of inclination of the lamp stem is adjusted in the range from 0 to 110 degrees. The upper part is rotated 180 degrees, plus you can turn the LED module itself and direct the light towards the ceiling. The luminous flux of 300 lumens.

Do you still carry any with a hand pump in the car? Yes, you dinosaur! This wonderful gadget measures just 140h106h48 mm takes up less space and does not require special food, because it works on the car cigarette lighter. Its capacity allows you to fully inflate the tires as the cars and crossovers. It is able to fully inflate a tire 195/65 R15 for 140 seconds, and the tire 235/55 R17 180 seconds. 4 built-in LED lamps facilitate the work in the dark and intelligent electronics, tested 100 models of cars has 18 automatic modes of operation for the correct tire pressure and prevents overloading. And it is a perfect gift for the motorist (surely it such a gadget yet). 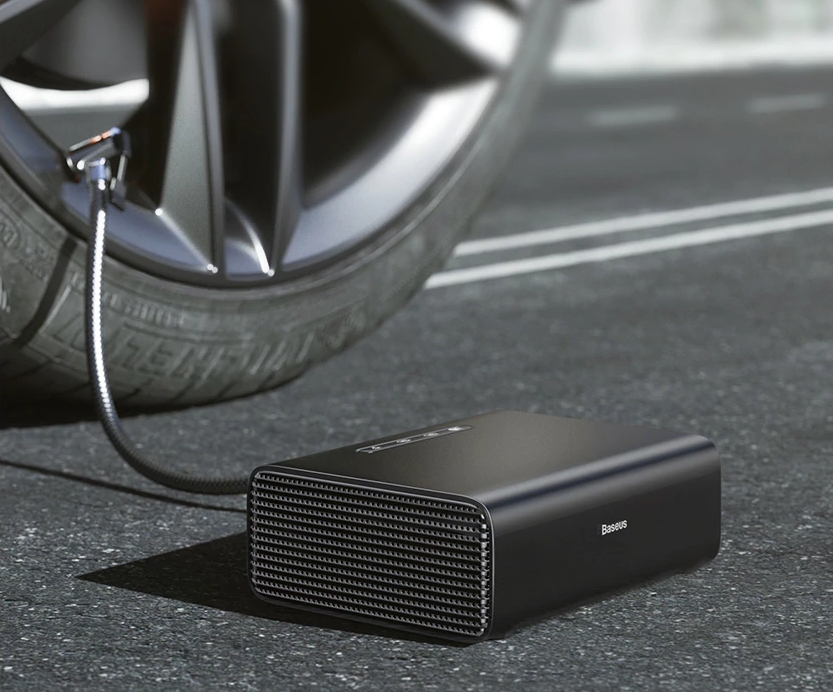