Nintebot announced the family of One Z single-cylinders last year, but only now a pre-order for novelties has been opened in the Chinese store of the company.

Why are they interesting?

These are the most stable and fastest models in the Ninebot / Segway lineup. In total, the company has released three versions: One Z6, Z8 and Z10, which differ only in power reserve and engine power. They are equipped with a large 18-inch wheel with a width of as much as 4.1 inches (10.4 centimeters) for better stability. The reserve sensor system ensures reliable operation of the monocycle, if the main one fails during the movement. The design can withstand loads up to 150 kilograms, water protection according to the IPx5 standard is declared (for the battery - IP67).

For safe driving in the dark, there are two LED lights and a stop light at the rear. In wet weather, you can install a mudguard from behind. And in order not to carry the device in hand, the user simply connects the telescopic handle. The manufacturer promises faster charging in comparison with previous models, but so far without details.

The younger one Ninebot One Z6 got a 1200W engine and a 524Wh battery. It develops speeds up to 35 kilometers per hour and overcomes the slope to 25 degrees, and one charge is enough for 40-50 kilometers.

The Ninebot One Z8 uses a 1500W motor and a 862Wh battery. The mono-wheel is accelerated to 40 km / h and will last up to 60-80 kilometers without recharging. The maximum angle of ascent is 25 degrees.

The top-of-the-line Ninebot One Z10 with a maximum engine power of 1800 watts allows you to travel at speeds up to 45 kilometers per hour. The battery capacity of as much as 1000 Wh is designed for 80-100 kilometers of driving. A rise to 25 degrees is also not a hindrance. 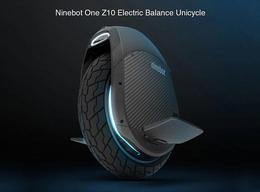