Face to Face: Ecosystems of Apple, Google and Microsoft

Today the market of device and software is first of all the market of ecosystems. When you buy a smartphone, tablet or laptop you purchase not a piece of plastic, glass and metal with some chips inside, but an entry ticket to a whole world of applications and services. That’s why we decided to compare three main ecosystems to date – Apple, Google and Microsoft.

As about specific platforms all three have their own desktop and mobile appearance. Not every platform is useful, say, e this or that way. For instance, Chrome OS today has only 3% of the market in new computer sales. Considering computer park already on hand it shares only portion of a single percent (Well we can think the real Google platform is the Chrome browser). Mobile Windows also has “outstanding” achievements in the mobile market. While Windows dominates the desktop world, Android reigns 70% share of smartphones.

Google and Apple are proud to have their platforms for wearable devices: Android Wear and watchOS respectively. Microsoft cannot say they have one at the moment as Microsoft Band or Band 2 are not fully functional wearable platform, though their fitness trackers are quite interesting solutions.

Nevertheless Microsoft sports their gaming platform Xbox possessing the first (or the second, depending on various opinions) place in the World market of game consoles. And Xbox is not a gaming platform only, it is a real media center with support of video-on-demand.

Apple and Google pioneered in exploring media trends so their ecosystems have specialized devices for local streaming of sound and video. Microsoft has no solution of the kind so they use the Miracast protocol (though it also supports Android platform).

We also have to admit Apple and Google can offer network printing functionality: AirPrint and Google Cloud Print respectively. While Microsoft offers their standard Windows network printing protocol and WIndows Phone cannot print without third party applications at all (although, Windows 10 Mobile will not have this issue, printing is available in their test builds).

All three platforms have very good developed content stores where you can buy not only applications but also music, video (films and series). Apple and Google stores also offer for sale books, magazines and newspapers.

Microsoft store has an interesting feature – both desktop and mobile platforms are unified. They started doing it since Windows 8, and Windows 10 will offer really universal applications able to work on both smartphones and PCs. I think there is no need to explain why it is beneficial to users: once paid you can used an application on any devices.

Cloud services are now very important part of any modern platform. So all of our ecosystems can provide equal solutions. But actually, it is not that simple: iWork for iCloud is much weaker than чем Office 365 (and even weaker than free document tools of OneDrive) and Google Docs. As about storage and photo warehousing Google Photos solution looks the best. The same can be admitted regarding maps. Noting services are dominated by OneNote, a very serious application of the Evernote level, while Apple Notes and Google Keep also ordinary notepads.

By my opinion Google Play Music and Apple Music are equal and both are available over the World (including Ukraine and Russia). At the same time Microsoft Groove is not represented in our country officially but you can sign up as an American user and with your credit card. 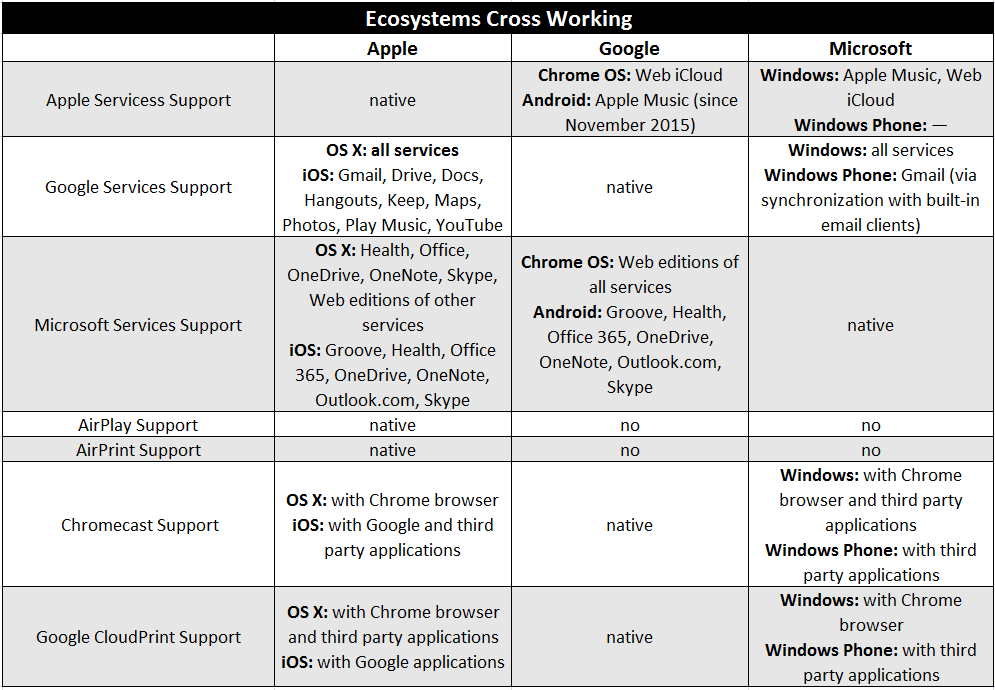 The most interesting moment is how the ecosystems collaborate. Our table states that Apple ecosystem tops the list. By my own experience I can say applications and services of Google on iOS works as fine as on Android, Microsoft applications for iOS are better that for Android and Windows Phone (surprise!). It is quite funny considering Apple is known for having proprietary and closed platform with lots of limits. Android works smoothly with Microsoft services (but not with Apple). Microsoft users are condemned to use only Microsoft solutions (staying aside email, contact, and calendar synchronization with Gmail). I really hope Windows 10 Mobile and expanded use of applications will change the situation soon.

What we have in general

While writing this article I realized how close platforms of the three ecosystems are regarding opportunities they offer. Especially I’m impressed of the success Microsoft achieved in short period of time catching the leaders Apple and Google.

Now we are waiting for the mobile edition of Windows 10. No doubt it will change the play field and roll out new features. Then we will update the articles with the new information.