The Thunderbolt 3 interface delivers lightning-fast speeds to match the performance of the internal storage. It has become a standard across Apple's Macbook Pro, Macbook Air, iMac and Mac Mini lines. Certain Windows laptops also have compatible ports. External Thunderbolt 3 SSDs are targeted primarily at videographers, filmmakers, photographers, and creative professionals. With the availability of cheaper solutions, anyone can enjoy the benefits of this technology. We've selected for you the best portable Thunderbolt 3 SSDs currently available on the market. 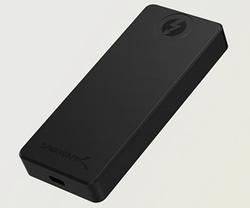 Sabrent Rocket XTRM-Q
The Rocket XTRM-Q drive from Sabrent offers good performance at a very competitive price per gigabyte. It can be plugged into any USB-C port, even if your computer does not support Thunderbolt 3. The drive is available in two variants: QLC or TLC memory, in a wide range of capacities up to 8TB. Highly recommended!
Read Verified Customer Reviews 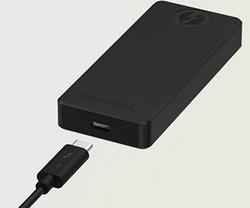 Sabrent Rocket XTRM-Q SSD can transfer data through Thunderbolt 3 port at speeds up to 2700 MB/s. The manufacturer does not specify write speeds, but high-capacity versions show over 1800 MB/s in tests. Unlike some other drives of this class, the model can be used with devices equipped with regular USB ports. In this mode, the speed will be limited to 900 MB/s, but you do not have to worry about compatibility. The metal case heats up noticeably under load, increasing the temperature of the internal NVMe SSD can also affect performance.

If you register the product on the manufacturer's website, the warranty can be extended from one year to five years. The SSD is sold in two versions with QLC or TLC memory. The QLC version is offered at a very competitive price, but is inferior to TLC in endurance and speed. The Rocket XTRM-Q also uses SLC caching technology, with a write buffer size of nearly a quarter of the capacity. However, as the drive fills up, the SLC cache will shrink. And if you write hundreds of gigabytes of data sequentially, it may become insufficient (and then the speed drops to 150-180 MB/s). Still, this is a good buy if you aren't dealing with large files daily. 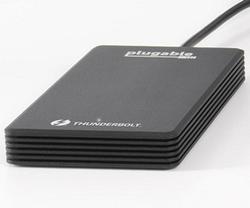 Pluggable Thunderbolt 3 External SSD has consistent thermals, so the drive outperforms more expensive storage devices when actively writing. Nevertheless, maximum write speeds up to 2200 MB/s are only achievable within the SLC cache (24 GB in the terabyte version). Sustained writes are just shy of 1000 MB/s. In terms of read speed, the TB3 SSD has a serious advantage over USB-equipped models. The metal case can survive falls from a small height, although the manufacturer does not officially claim such protection.

The main complaint from users about the design is an non-detachable cable. It is quite short, and you can not connect any other one. The Plugable Thunderbolt 3 External SSD is backed by a 3-year warranty with an endurance rating (from 800 to 1900 terabytes written, depending on capacity). 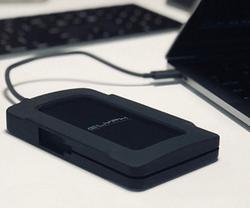 The Glyph Atom Pro's biggest advantage is its sustained speeds. The drive runs almost unheated during operation, providing stable performance. Maximum read/write speeds are 2800/2600 MB/s. The SSD is great for advanced users and professionals who work with 4K and 8K video processing, virtual reality, 3D rendering and animation. It can be just as fast as your workstation's internal drive. But your computer or laptop must have a Thunderbolt 3 port; USB connection is not supported.

The Glyph Atom Pro has a silicone bumper with a cable holder. It's really convenient: the cable won't get lost and you just have to pull the sides of the protective cover to get it out. The drive meets MIL-STD-810F for shock-, vibration-, dust- and sand-resistance. The SSD is preformatted for HFS+ to work with your Mac out of the box. 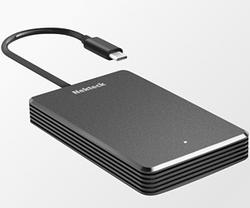 Nekteck already has experience in building enclosures for SSDs. And now the company has decided to release its own external Thunderbolt 3 SSD. It offers read speeds up to 2300 MB/s and write speeds up to 1300 MB/s. The compact enclosure is made of metal and acts as a heatsink. According to users, the SSD can write from 150 to 180 gigabytes of data at high speed. After that, it slows down due to thermal throttling. Only the 480 GB version is currently on sale, but the affordable price makes it a good option to consider.

The only drawback is the non-removable cable. It can wear out over time, in which case you'll have to go to the service for a replacement. Nekteck Thunderbolt 3 SSD Drive is only compatible with ports of the corresponding standard. 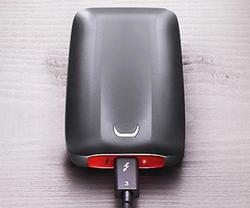 Samsung X5 looks more premium due to the combination of glossy top panel and red rubber bottom. The case is reinforced with magnesium alloy and withstands drops of up to six feet.

The 970 EVO NVMe SSD is installed inside. The manufacturer claims read speeds of up to 2800 MB/s and up to 2300 MB/s for writes. That's some of the best performance in the portable SSD market. Even when the SLC cache is full ( a 1 TB model has about 45 GB), the drive stays fast. However, after 10 minutes of intensive use, it starts trotting, slowing down the transfer of files.

The SSD supports AES 256-bit Encryption, Samsung Portable SSD Software allows you to protect your data with a strong password. The Samsung X5 is not backward compatible with USB 3.2, but that doesn't prevent it from being one of the best SSDs for Mac users. It will also work with Thunderbolt 3 enabled Windows machines. 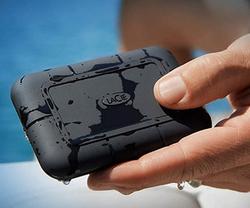 LaCie Rugged SSD Pro is a good choice for on-the-go work. The drive can be dropped from a height of three meters and its black silicone-covered casing is also IP67 dust and water-resistant. In read mode, the speed is up to 2800 MB/s, sequential write performance is also good - up to 2100 MB/s and sustained transfers at 1100 MB/s after the cache is full. In real life the SSD was very responsive. No problems with heating were observed either. There is a separate controller inside for USB port compatibility, so the SSD will work with any computer.

In addition to the 5-year warranty, you'll also get free Rescue Data Recovery Services. If the LaCie Rugged SSD Pro fails, specialists will try to recover data stored on the drive. It's also worth noting the drive's relatively compact size (0.67x2.56x3.85 inches).

The first portable Thunderbolt 3 SSDs cost a lot of money and were a niche product for professionals who needed maximum performance. Today, more affordable options are available, and there are several things to consider when choosing an SSD.

There are 4 main types of flash memory.

When choosing a portable SSD, you will be dealing with only 2 of them. But you need to know about all of them to understand how the drive works:

A single SLC memory cell stores one bit of information. This type of memory is very fast and reliable. It is expensive to produce and that is why other flash chips are used for consumer products.

It allows 2 bits in each cell. MLC memory is fast and also not cheap. It is relatively rare (some SSD models from Samsung and Enterprise solutions).

With 3 bits per cell it is the most widely used type of memory. It degrades faster, but SSD optimization algorithms help achieve a long lifespan.

It can hold 4 bits per cell providing even greater information density. QLC memory is less expensive, but is less durable than TLC and other types.

Thunderbolt 3 SSDs use either TLC or QLC flash memory. Part of the available space is allocated for a "pseudo-SLC" cache: the memory will operate in single-bit mode at maximum speed. The size of such buffer can be fixed or vary depending on the amount of free space on the disk. When the SLC cache is full, the drive slows down, although the top models show good performance even with long writes.

Why should I choose Thunderbolt 3 SSD?

What is the cheapest Thunderbolt 3 SSD?

If you are on a budget, go for a small Nekteck 480GB Thunderbolt 3 SSD Drive. It's fast and relatively affordable. If you're looking for a high-capacity drive, the Sabrent Rocket XTRM-Q with QLC flash memory is available in up to 8TB of storage space.

It's possible to build your own external drive by installing an internal M.2 NVMe SSD in a Thunderbolt 3 enclosure. This can save you some money, and DIY solutions have no capacity limitations. However, some features are only available in branded external SSDs. For example, owners of Samsung X5 SSD can protect data with a password. And the LaCie Rugged SSD Pro can withstand being submerged by a meter in water for 30 minutes.