Meizu guys do their best to roll out new smartphone models as fast as possible. To be true, the company seems not to have a clear strategy and some steps they make look quite strange. For example, PRO 6 – in competition to similar products with big screens from other manufacturers that smartphone got 5.2” display and the top MediaTek processor. Despite that, Meizu smartphones are still of great interest by the price/quality ratio. Today we have for reviewing the brand new M3 Note which can kill the market and become the new top hit. As well, as its predecessors. 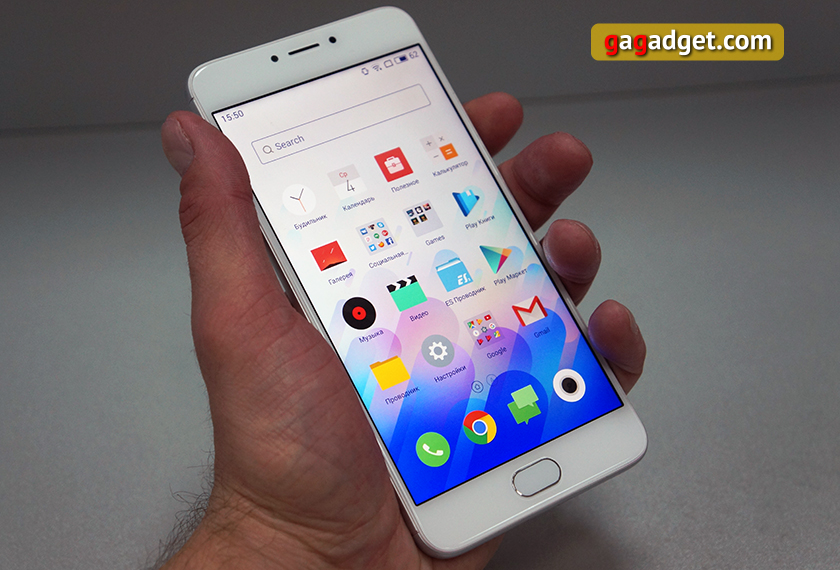 There was no big difference between Meizu M1 Note and M2 Note, and not always better way. Particularly, M2 Note lost by work speed but got MicroSD card support. M3 Note has got overall improvements: metal body instead of plastic, 3GB RAM edition and 32 GB of flash memory inside, battery works longer, fingerprint scanner and bran new 8 core processor MediaTek Helio P10 – we meet this processor the first time.

General design of the smartphone has not changed and looks familiar since the release of the previous Meizu device, but now in metal body. There are editions in gray with black front panel, in gold with white panel and in silver with white panel. No surprising changes on the front side: big display, standard set above and a button below. The front panel is covered with T2X-1 rounded glass, that is a very popular trend nowadays. Frames are quite thin: 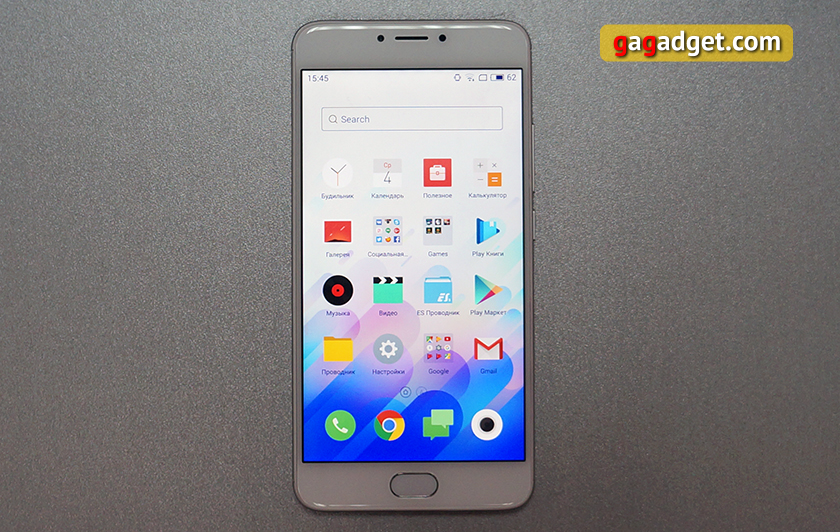 We can see the only button mTouch 2.1 under the display which returns back after you touch it and on the main screen upon pressing. It also works as fingerprint scanner: 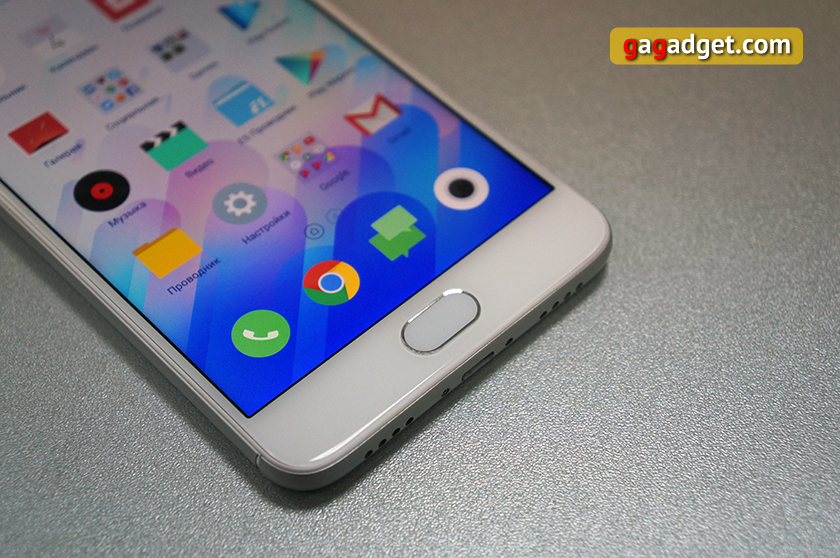 Above the screen we can see a speaker, two symmetrical holes of the front camera and sensors (perfection paradise!) and LED indicator: 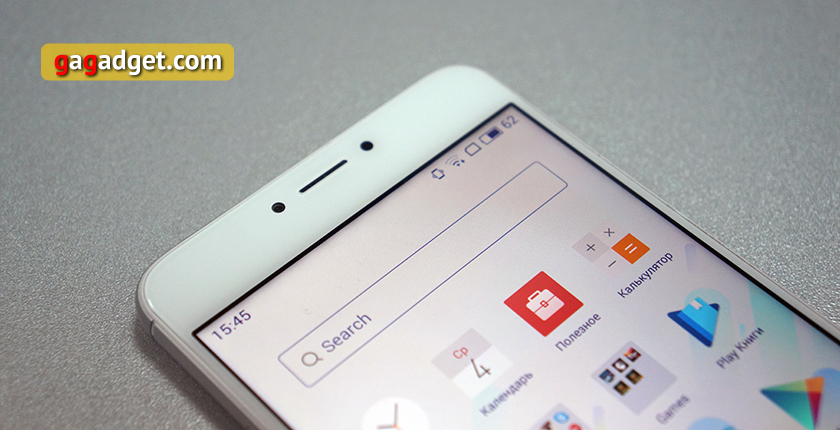 In addition to the symmetrical “eyes” above the bottom side looks similar – MicroUSB connector in the middle and four round holes by sides (the left set covers a microphone while the right set protects loud speaker): 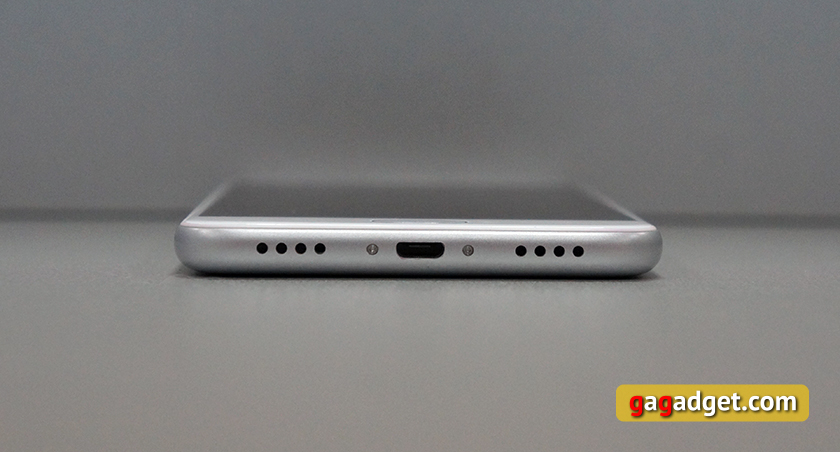 The left side of the body sports slots for SIM and MicroSD cards:

The smartphone possesses a hybrid slot like did predecessors. You can insert either two SIM nan cards, or a SIM and a MicroSD: 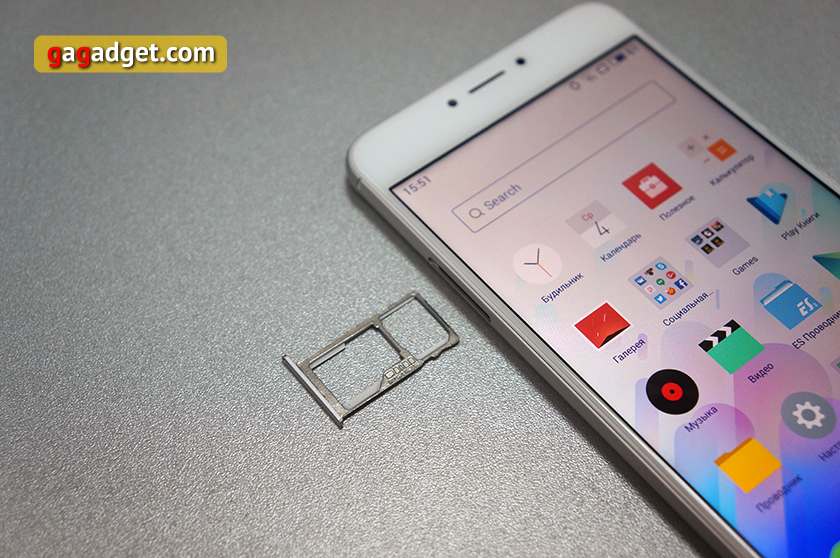 Headphone connector is situated on the top side of the frame close by a hole of an additional microphone: 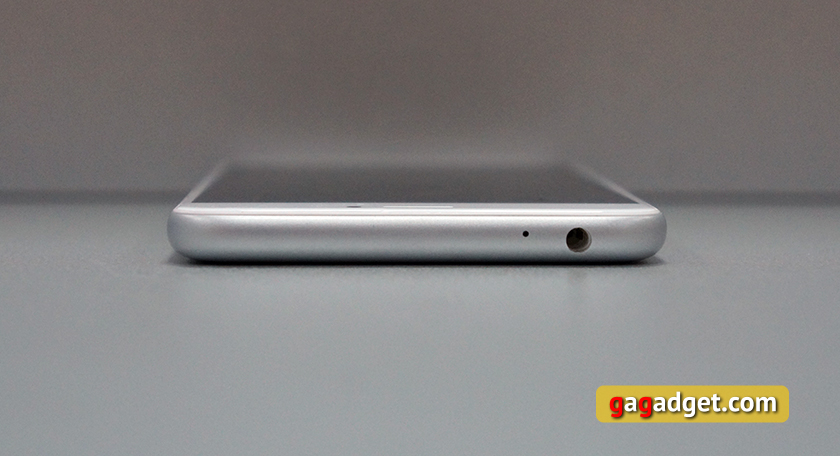 Mechanical buttons are placed the same way as  Meizu PRO 5: they are located in a small recess. The buttons stick out enough and move tight and nice:

The back panel is made of metal and propagates the updated logo of Meizu.  Camera module is in the top part of the panel: 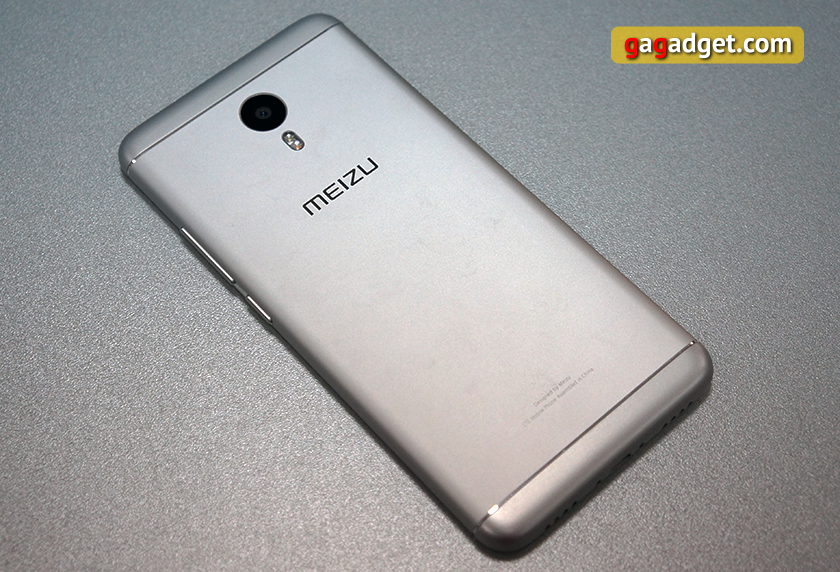 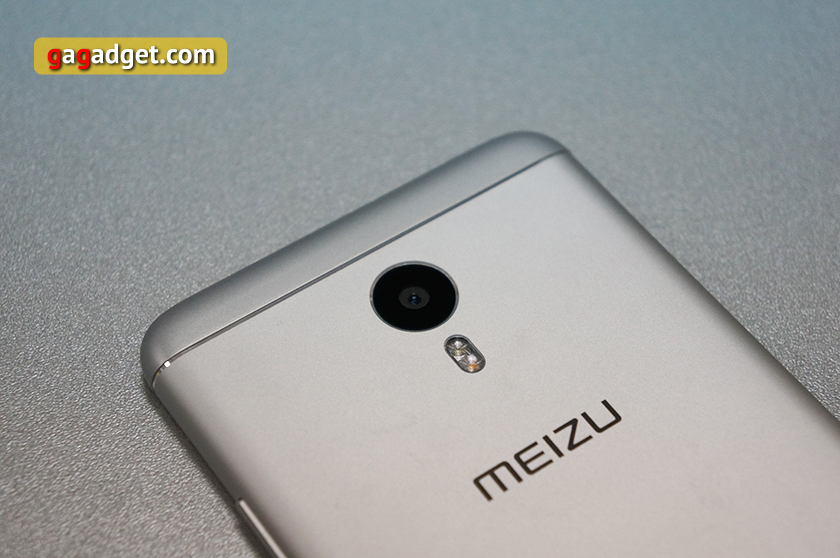 We have no claims regarding the build and material quality everything fits good. And the smartphones lays in hand well and the metal body feels just great. Comparing to the previous models Meizu M3 Note looks more luxury, nice and solid.

What About the Display?

M3 Note features the same 5.5” FHD 1920х1080 display with  401 ppi. It sports high-quality IPS-matrix with full lamination with no air gap technology. Maximal brightness declared is 450 cd/m2. IT is covered with T2X-1 rounded glass like many modern smartphones of higher price range. Of course, quite good oleophobic coating. We’ve got a sample device (as we know from previous models, display quality may vary a lot from those in production samples). View angles are great, colors are bright and vivid, picture is just nice: 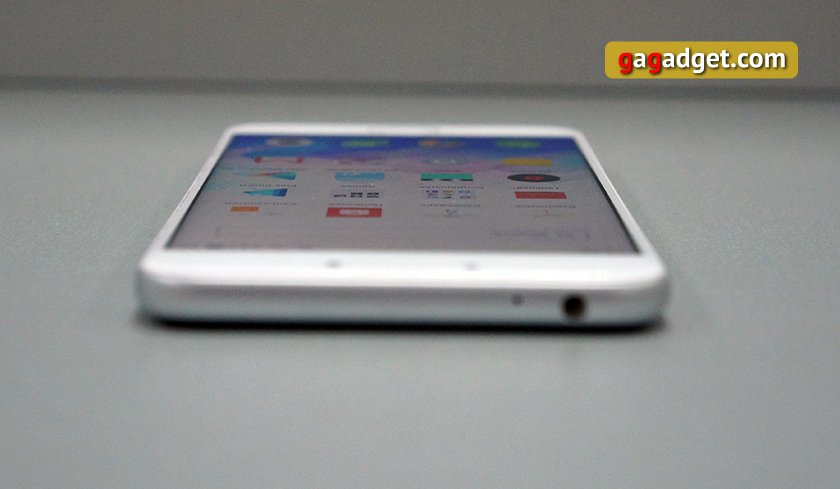 Brightness range is enough but it looks like it is lower than in the predecessors. We will compare it later: 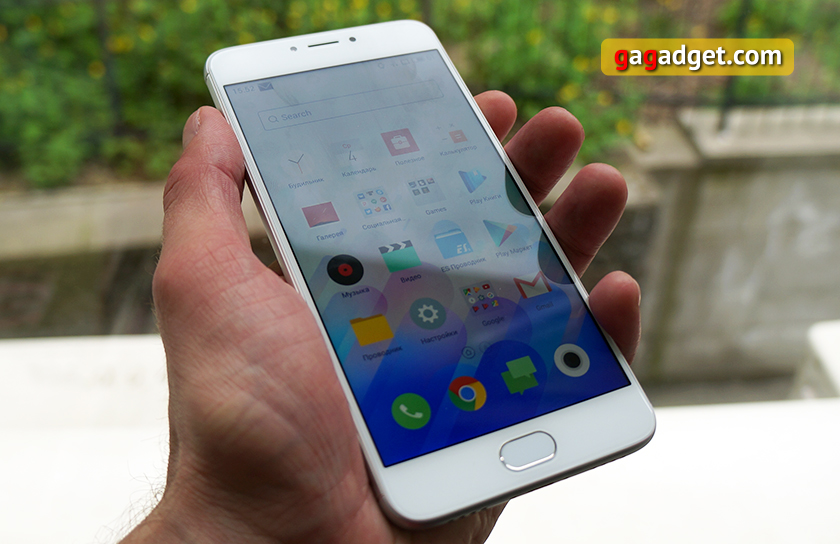 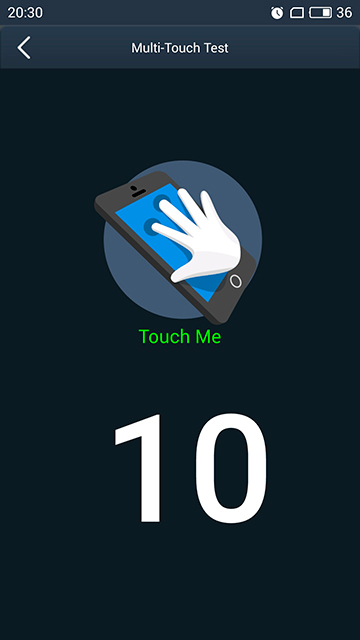 As expected, the colorimeter measured that the maximum brightness is far from the declared value and is 344.943 cd/m2, black spot brightness is 0.601 cd/m2 and contrast is  574:1. And again, it is necessary to say we have a beta. The mass market product will be better, we hope. As for colors, they are very good. As usual, there is an utility called Flyme for adjusting the colors (it is not changed from version to version): 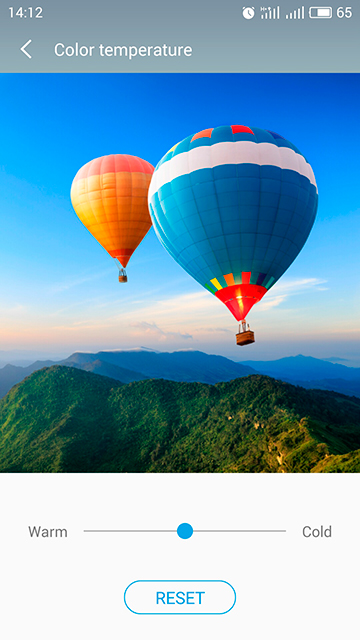 Red and green are at correct level while blue is a little bit excessive. Color temperature can not be adjusted over 7500K (reference value is 6500K):

Meizu M3 Note is built with the brand new MediaTek Helio P10 processor (also knwn as MT6755M). We never meet it before. It is a 64-bit 8 core (2 blocks 4 cores each) processor clocking upto 1.8 GHz, energy saving mode is upto 1 GHz. It also features new graphic accelerator. RAM can be 2 or 3 GB. We’ve got the 2GB edition. Actually the system is more powerful than the predecessors, but it is no competitor to Helio X10. Well, no surprise: X line is positioned as more performant devices, while P is the middle class. Despite of that we didn’t face any problem with the interface. All modern games run smoothly without lags (we experienced lags with Meizu M2 Note). Well, not at the maximal settings, but satisfactory. The body is heated normally and only under sever loads:

The smartphoen will be on sale with 16 and 32 GB of built-in flash memory and you can add a MicroSD card instead of one SIM card. It is quite standard Chinese solution not everyone likes, but it is better than nothing.

Battery goes up from 3100 mAh to 4100 mAh, nice extra. In the video playback mode smartphone works about 12 hours, and slightly less than 6 hours under the maximum load. Under normal circumstances the battery secures two days of normal talks, web surfing, synchronizations and half-an-hour-per-day games. The increased capacity provides quite the expected results.

The loud speaker wails loud, but the sounds is not that good. Nevertheless you will not miss an important call. There is no miracles with headphones – everything is average. If you need high quality sound, go buy high quality flagships from Meizu.

What About Firmware and Interface?

Our beta sample works on Android 5.1 Lollipop with Flyme 5.1.3.0G. G stands for a global edition with Google services available. We have quite crude version with Ukrainian and Russian interface and without Google services. We had to install them separately through a separate application. So we could not evaluate the firmware in full and we have to wait for the release version rather. All variations of the 5th Flyme are almost equal, so you could see it in review of  PRO 5 and PRO 6.

Standard desktop organization without a separate application menu. Folders, gestures and weak up with two taps, swipe over unblocking, gesture launch of applications are all supported. Normal Flyme:

The upper shutter opens with swipe down anywhere on the screen. Another swipe opens the full version with notification and all switches:

Settings menu is standard, but more handy than in early version of 4.5:

A separate menu is for managing SIM cards for data transfer by default and network priority:

A separate option for security setting with fingerprint. You can have up to 5 fingerprints. Despite the firmware is crude it works fast and accurate:

Despite beta version of software the smartphone generally works smooth and fast. There was a couple of lags, bugs with WiFi and application installations. But I’m sure the release edition will not have those issues.

What About the Camera?

The main camera is 13 megapixels, phase focus, f/2.2, dual LED-flash with different colors. The front camera: 5 megapixel, f/2.0. The interface has not been changed. There is a panel with quick access to functions and settings, mode switch, previous picture. As usual, there is a manual mode as well:

Videomode, manual mode and other modes are turned on in a separate menu, HDR sets up in settings:

Meizu used to have weak algorithms of photo and video from the camera. The problem has not disappeared magically. Well, we have to wait until the releales to make sure. Sample shots we did:

Slow motion is also available, the resolution is 640х480:

With Meizu M3 Note the manufacturer updated and improved almost everything comparing to M2 Note. Positive moments are: Meizu smartphone goes metal, gets fast and handy fingerprint scanner, sports new platform of high performance and a new battery of improved capacity. The only minus we have seen is the camera quality. But we have to wait for a commercial firmware to make sure – it may improve a lot. The smartphone will no doubt be very popular in the price category below USD200 (the top edition of this model will cost as much): competitors have nothing to offer for the price. The runner up, Xiaomi Redmi Note 3, can be proud of higher performance but there is not MicroSD slot and its costs more.