If you need a video recorder, the easiest way is to buy it on Aliexpress. Does it make sense to buy it there and wait for the parcel from China? In practice if you are willing to wait for 2 to 4 weeks (most parcels arrive in this time frame) you can get a good device (all DVRs are produced in one way or another in China), saving up to half the cost of the same vehicle in our retail store.

The company Xiaomi together with the brand 70MAI released a new DVR A800S, which can be called the flagship in the whole line. The build quality is very good, good matte plastic, the camera itself is held very firmly and there will be no shaking even on a difficult road. Unlike its predecessors it has built-in GPS. Control via your smartphone through the official app + 4 physical buttons on the front panel. Users dislike the standard voice recording, but it is possible through 4PDA to download the firmware and put the normal voice. You'll also love the night mode, the gadget has a 7 lenses lens from Sony and lets you keep your eyes peeled for more clarity. 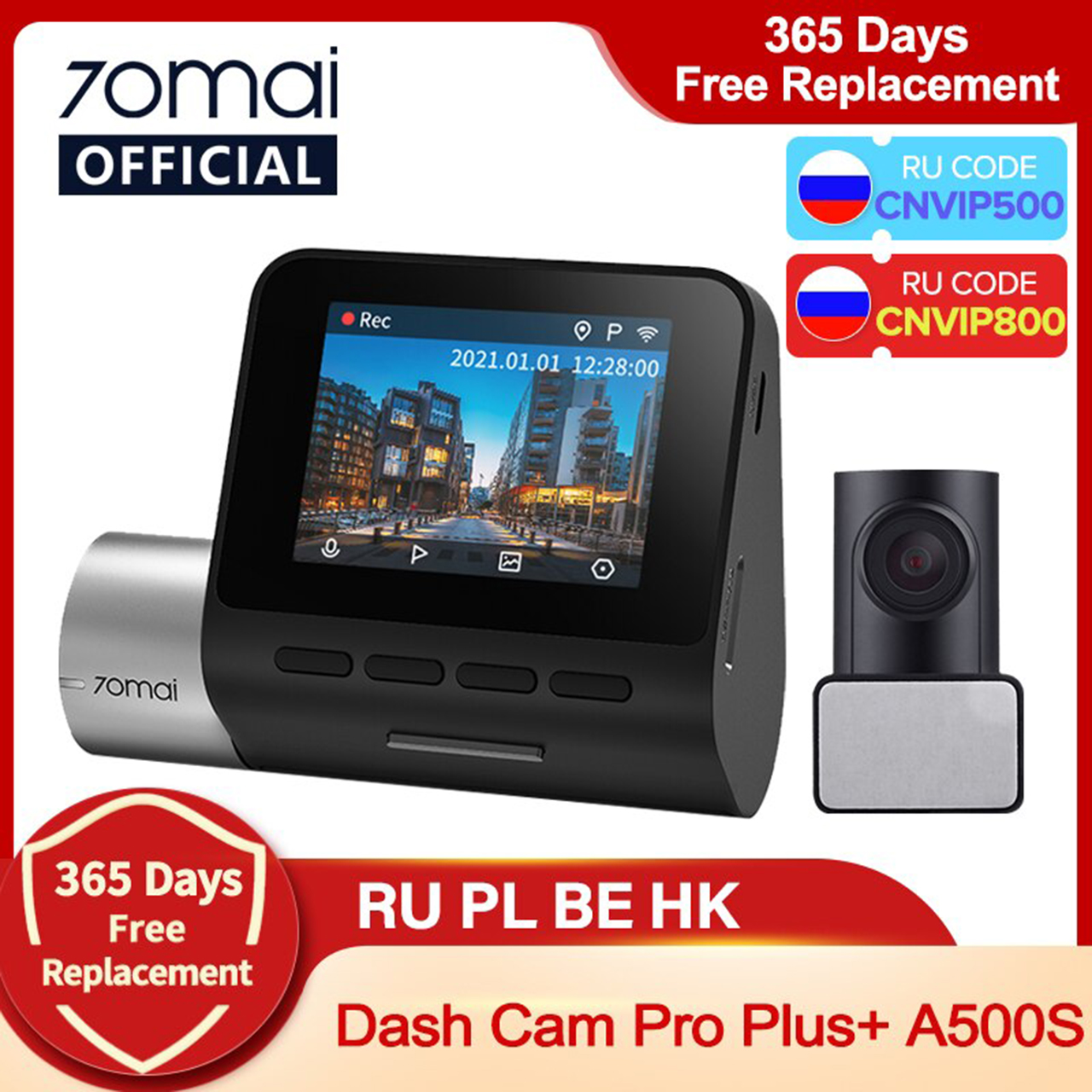 There is no point in listing the characteristics already, as they are much the same as the previous ones, we can highlight only one thing: recording will be in 2592x1944, which means mode 4:3 (this is not very good). Rear camera is bad enough (users highlight the foggy picture and the fact that the numbers are only visible up close). But there is a plus that other opponents did not have: this DVR captures the movement of your car. In the app, you can look at the exact path, speed, and how much you drove in total. In night mode, the main camera will please you, you can see the license plates well because of the built-in technology (anti-fog and HDR). 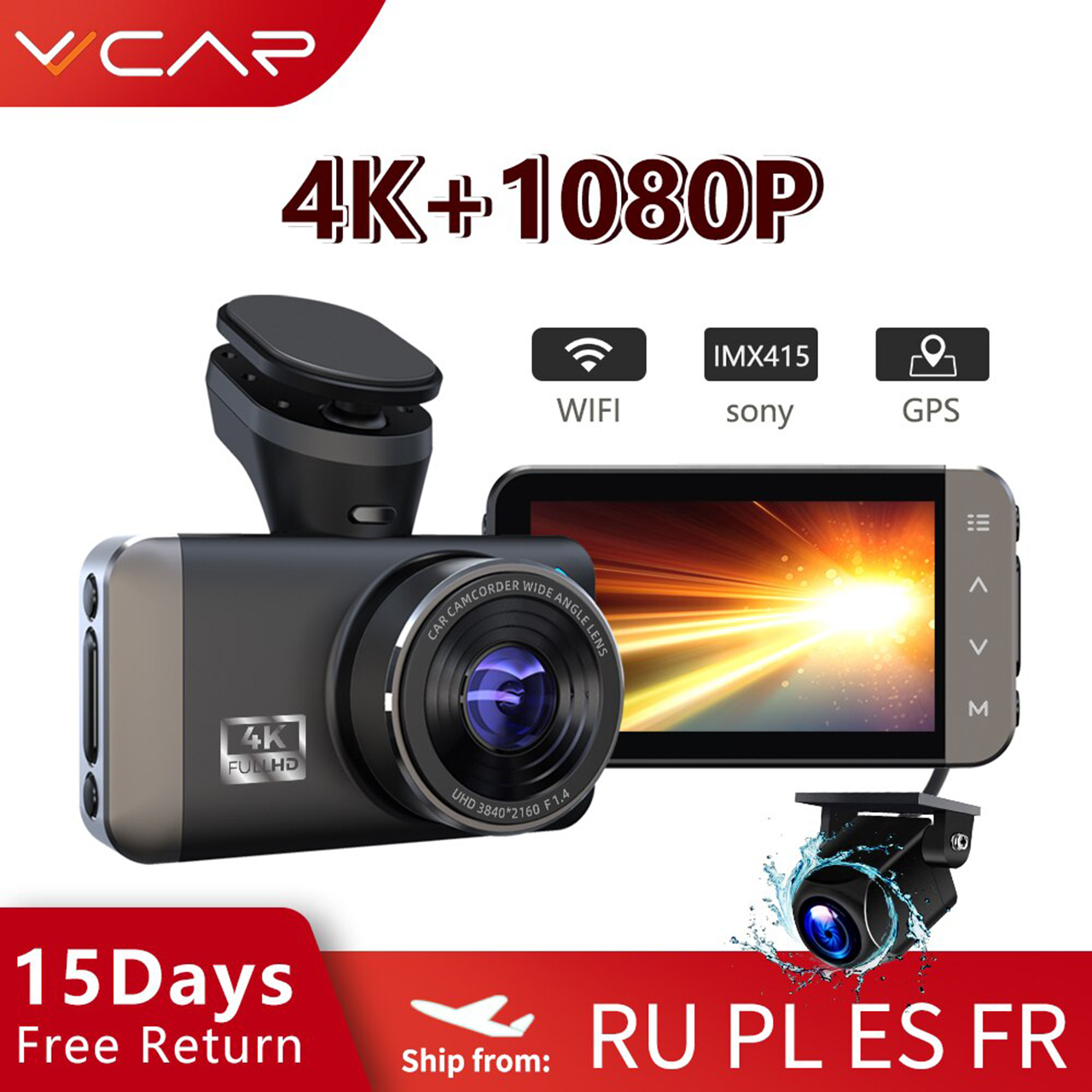 The features of this gadget can be called the best in our top: 4K recording for main camera, 1920x1080 for rear camera. Of course, there's a parking mode, loop recording, GPS, Wi-Fi etc. But the build quality does not match the price: inexpensive plastic. Numbers are very well read in any light and even at night. The users have noted fixing flaw: the camera shakes on a rough road because of the poor hinge mount. The rear camera rotates the image 180º horizontally (or simply put, it mirrors). Control with the buttons on the device and via a mobile app. 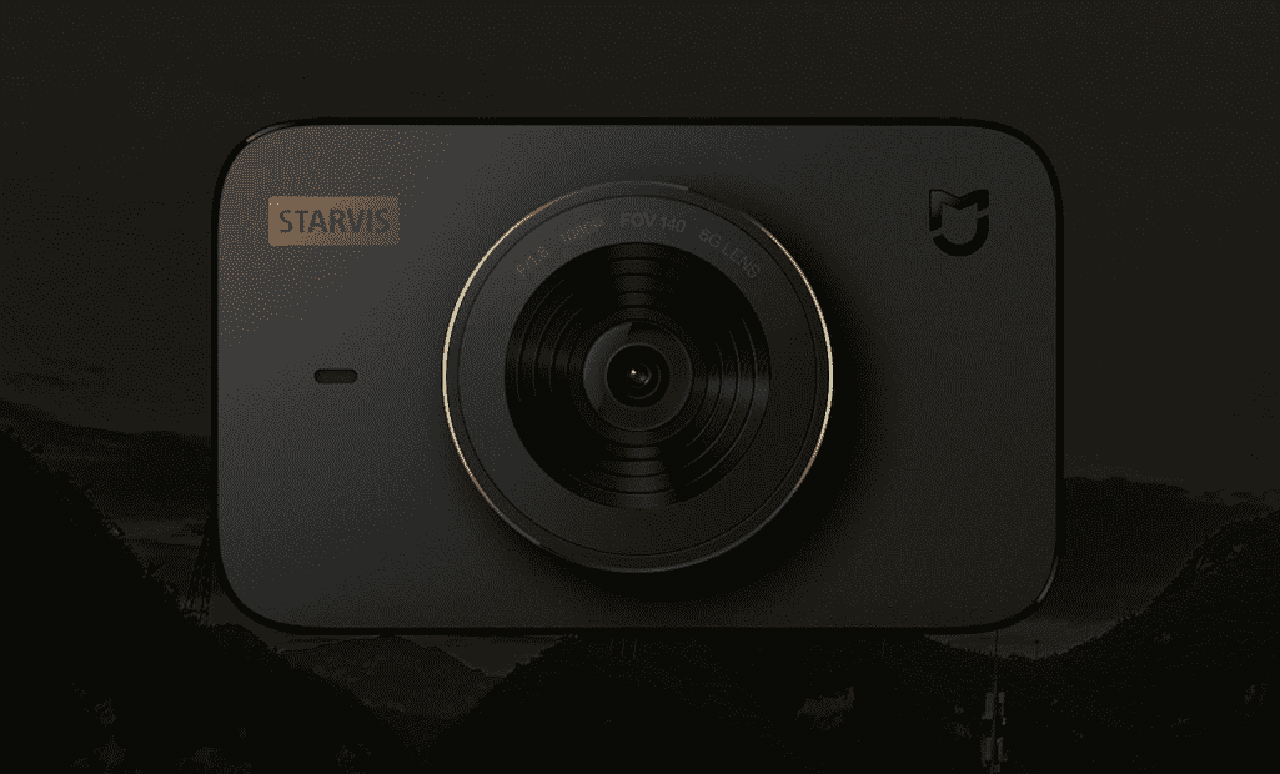 Next comes more "elite" models in our top. The body of this DVR is metal for it can already put a fat plus. If a little about the characteristics: record video 1920x1080 at 30 FPS, voice control, support for the Russian/English language, 140º viewing angle and night vision mode. Connecting to your smartphone via Wi-Fi app. According to tests and reviews of the recorder shows itself very well.

Another mirror-recorder. A 12 inch GPS mirror with two cameras. Both shoot in Full HD. Records the sound very well. Here I would point out the best rear camera of all the devices presented. The controls are touch based. Very unpleasant minus, you can not change the exposure, so there may be a little bit of highlighting on a sunny day. This DVR is in last place, not because it is the best, but simply because it is one of the good DVR mirrors. 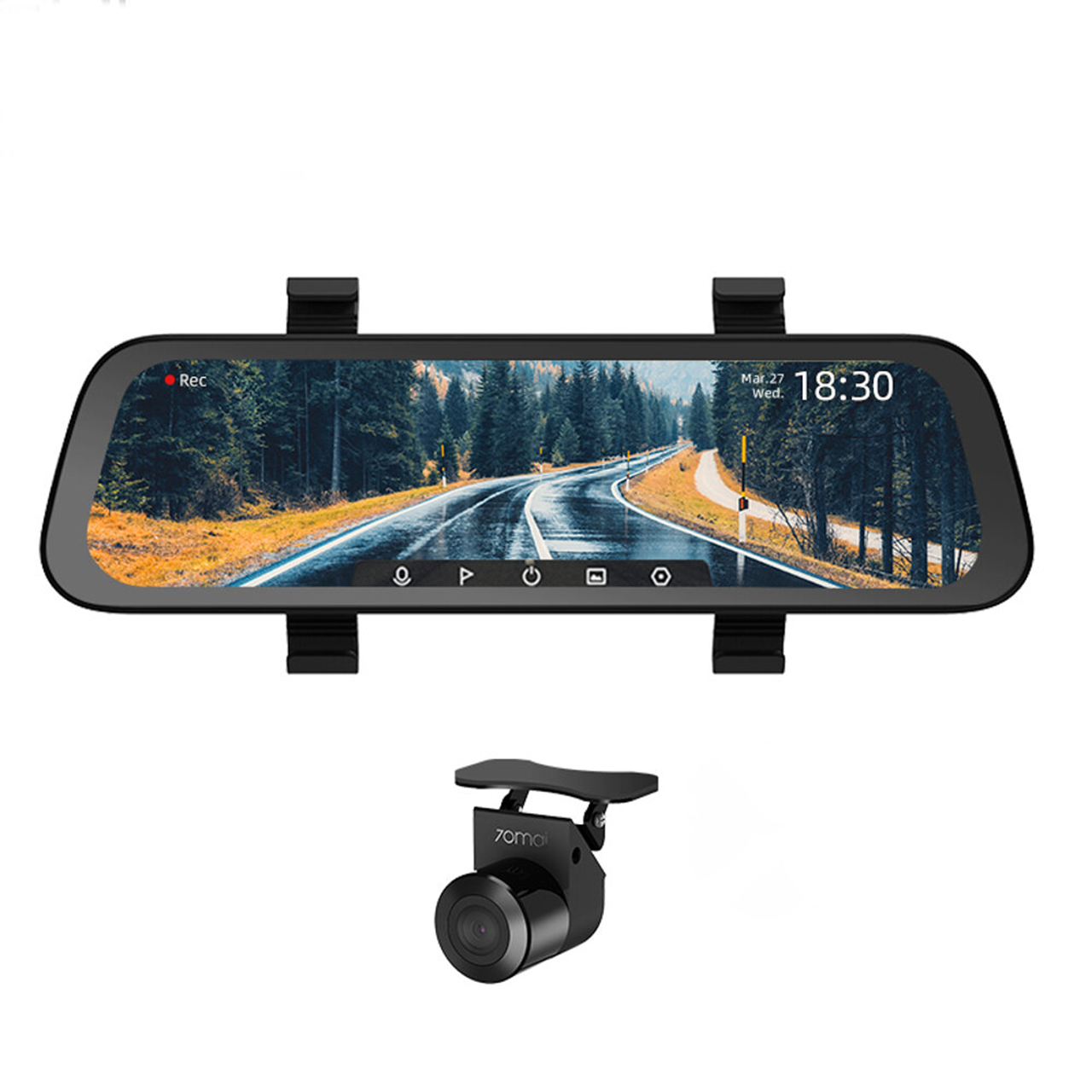 Different aspects of this recorder depends on the package, so I will not write about some of his detailed capabilities, it is better to learn this information yourself. Mirror DVR in the whole area of the mirror surface, plus it has not the best rear view camera (judging by the reviews). The screen is controllable in the mobile app. It's very easy to attach, so you don't have to worry about that. 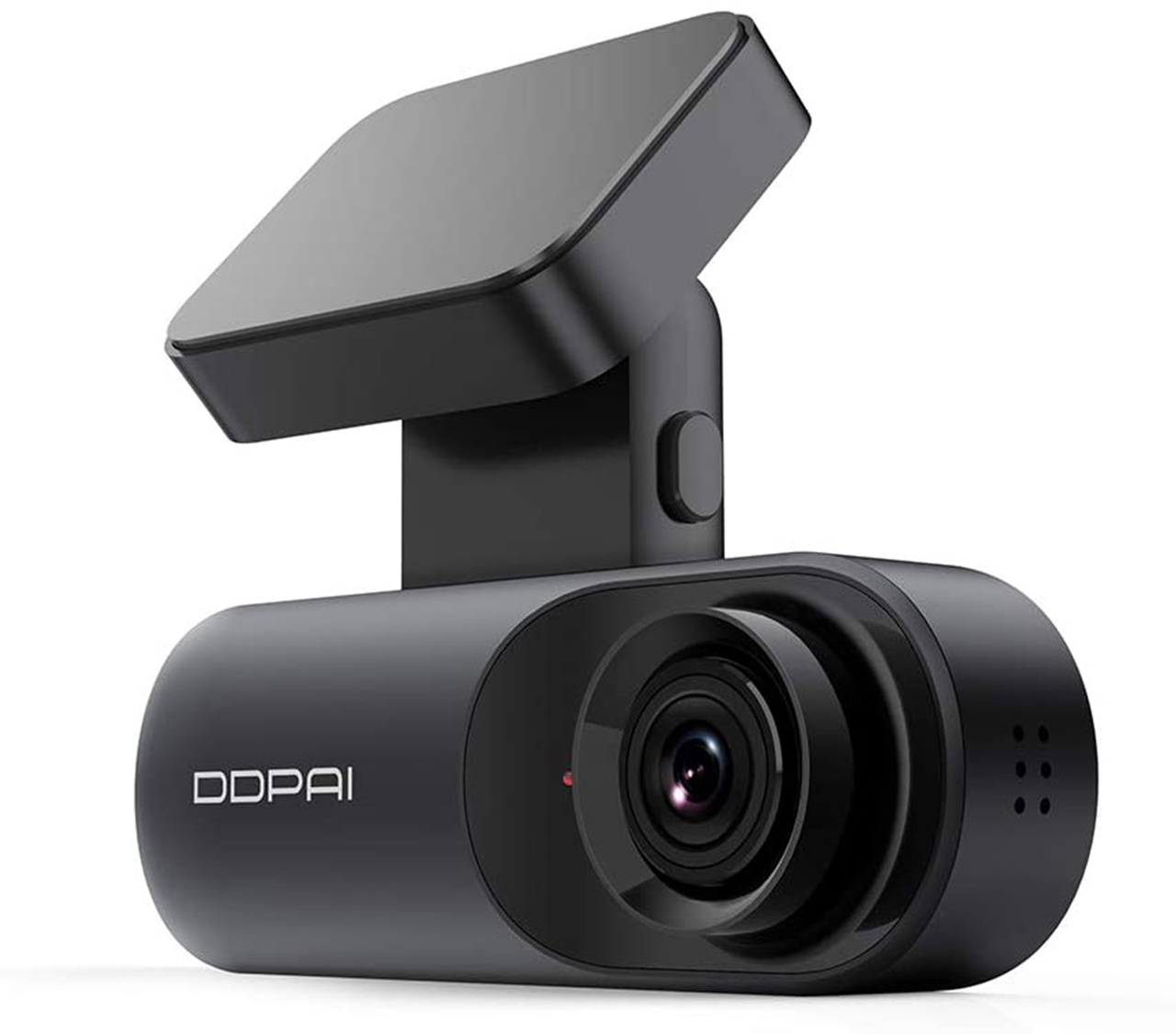 Another compact DVR from Xiaomi sub-brand. The role of control completely fulfills the smartphone, as it has no screen. There are only a couple of LEDs and voice alerts (greeting, connect to GPS and others). This recorder is not in bad demand, but the complaint of users on the night mode does not go away: for someone it works well and someone bad. Maybe it's all in the firmware, but that will have to check themselves.

Price: $55-88 (depending on the configuration and memory card). I want to buy! 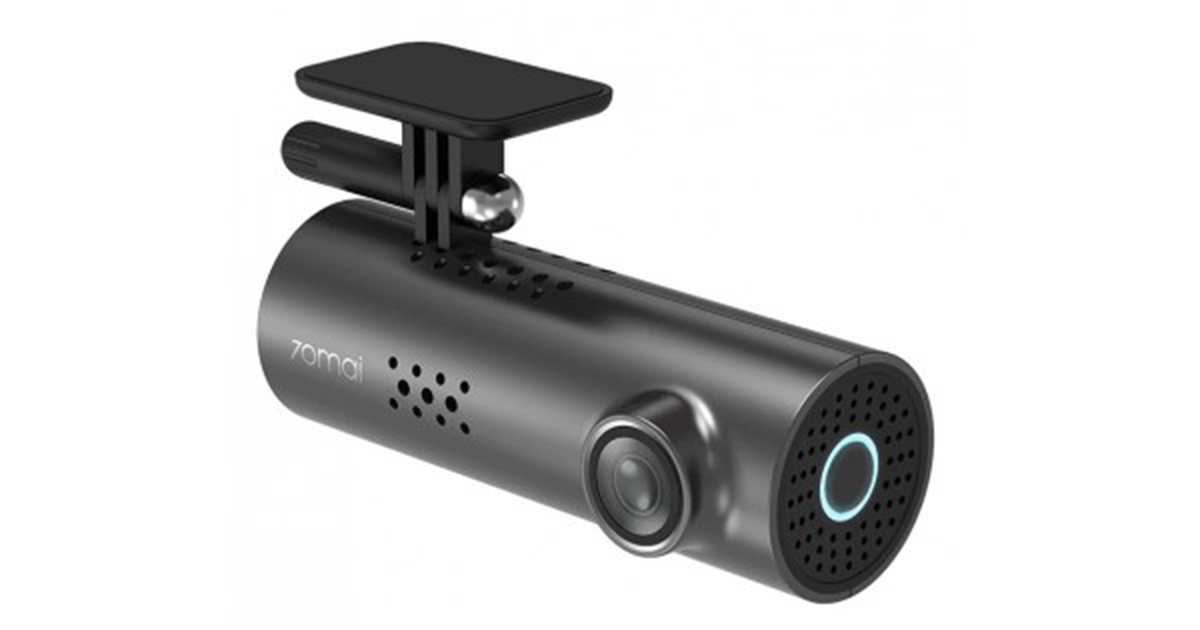 Proven in the work of thousands of motorists, simple and reliable model of the popular gadget from 70MAI - this company specializes only in automotive electronics. Nice brushed plastic, there's only one button on the body, so everything is mostly done via your smartphone. Voice assistant, which will notify you about the current mode of the device in Russian. It is stylish and small, so you can safely put it in your car and do not be afraid to spoil its appearance. 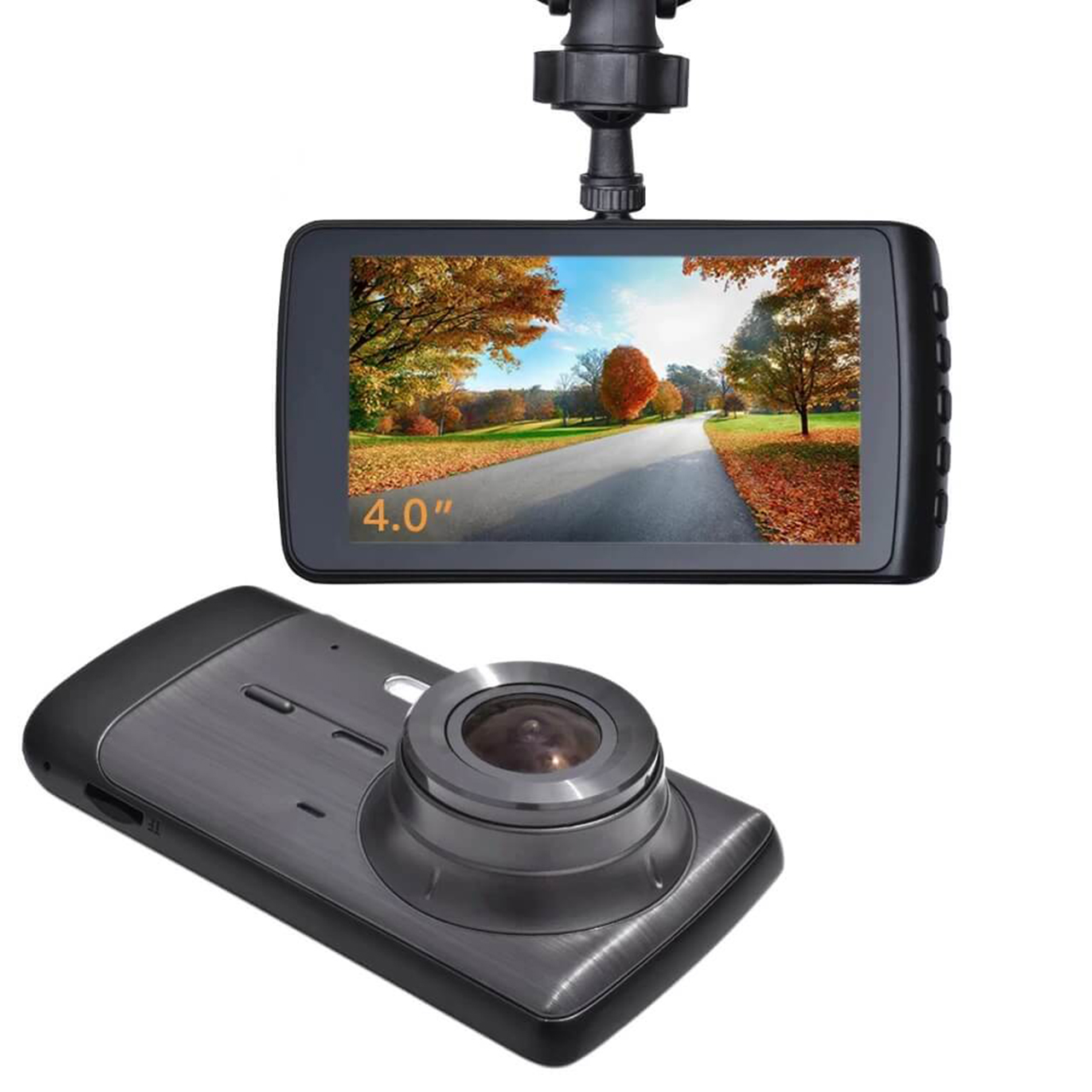 What about the specifications? Full HD resolution, wide angle lens (can cover more than 4 lanes of traffic), aperture control (so the picture was not too bright), 4 inch screen, parking mode, loop recording, 6 languages (there is Russian and English). Support for recording from two cameras. Minus, absolutely no capacity battery, so you can use without power only in parking mode. 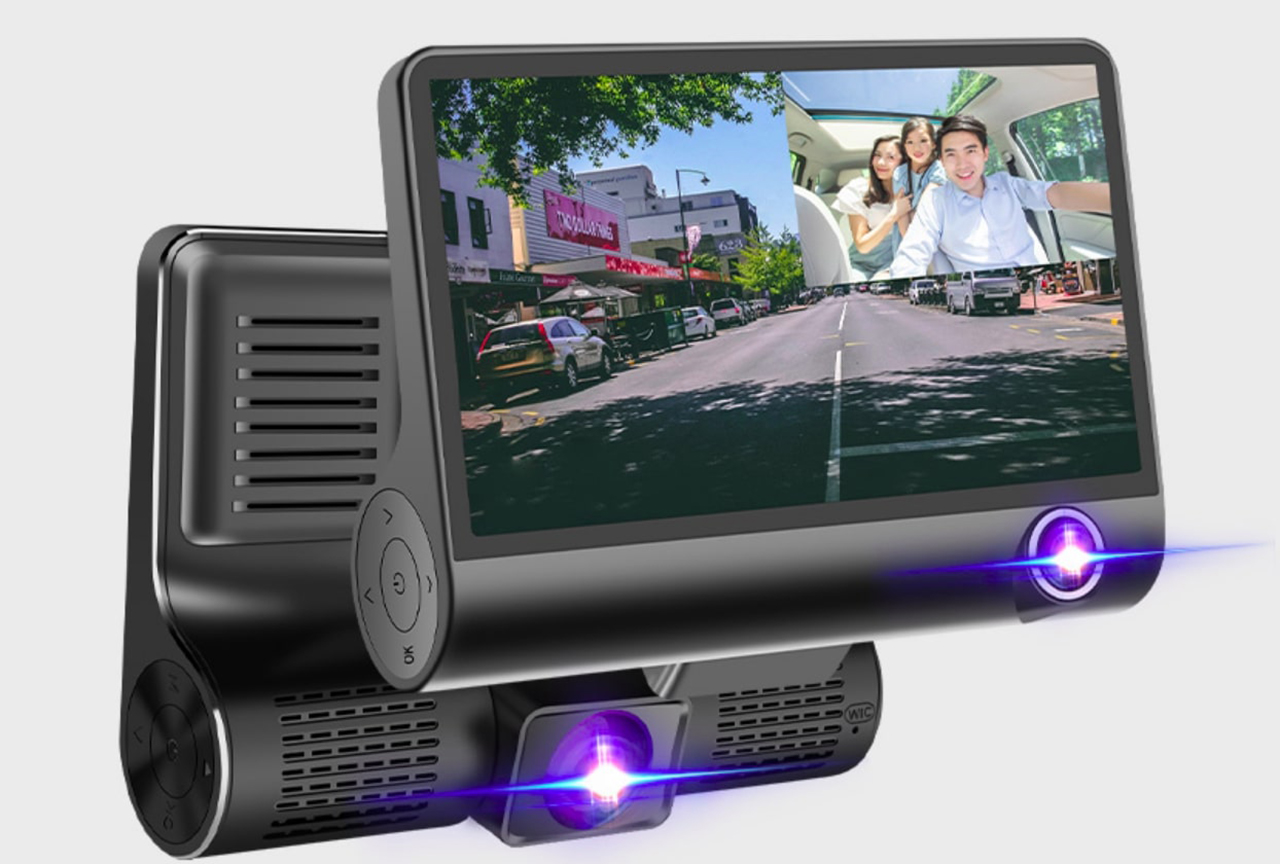 The first video recorder with three cameras (the main can only move vertically, salon and rear). Includes 6 meter cable for the rear camera, 3 meter power cord, two suction cup mounts (users note that it is not the best) and 3M adhesive tape (which is worth using). The main camera writes in full HD. Also noted overheating, so in the sun is unknown how it may behave. Basically for the ridiculous price we get quite a fat kit, many people take this option because of the rear view camera.

A regular DVRS or mirror - what to choose?

Mirror-style DVRs E-ACE A08 do not obstruct the view and are not so visible from the outside, which reduces the risk of theft. In turn, DVRs of the usual format are more versatile: they can be moved to any other car, while the mirror does not always fit between the sun visors. You just need to decide what's more important for you. There are rearview camera compatible devices in all formats.

Does the black box work when the engine is turned off?

It depends on both the model of the black box and the car itself. In some cars the cigarette lighter socket power supply is not interrupted when the ignition is switched off so the recording can be performed 24/7. The power is cut off more often, some video-recorders are equipped with a rechargeable battery for this case. In the parking mode ("parking monitoring"), the device wakes up when the impact sensor is triggered, captures this moment and goes back to sleep until the next awakening. This function is most successfully implemented in 70mai Dash Cam Pro, a full charge lasts for about 40 activations.

What memory card to buy in the DVR?

Since the videos recorded with the device will be periodically re-recorded, it is better to buy a memory card of a good brand. It will live longer and will correspond to the declared speed class. For all the devices in our rating, cards marked Class 10, UHS-I (U1) or V10 will do. There is no need in more high-speed, if only you pay for endurance models like Samsung PRO Endurance, honed for continuous video recording. And one more tip: choose a card with maximum supported capacity (usually 32/64 GB). That way it will not have to work out of shape, and your memory will always contain recordings of several trips.

Would an action camera work instead of a DVR?

In general yes, but there are nuances. First, you will need an action camera with a loop recording mode and the ability to shoot while charging (built-in battery will be enough for an hour and a half of work at best). Included with the DVR is already a mount, for the action camera will have to come up with your own. The cameras sometimes give a better picture, but under the blazing sun, they may overheat and shut down. Finally, in extreme camera you will have to start and stop the shooting manually.

Rear view camera - why and how does it work?

Such a camera is installed at the rear of the car and automatically activated while reversing to make parking easier. Additionally, parking lines can be displayed, they help estimate the distance to the nearest obstacle. There is also another mode of operation, when recording is done simultaneously with the DVR camera.

If the DVR is not capable of 100% to save you from the accident, it will certainly be able to prove your case. And the cost of this device is disproportionate to the benefits it may bring. Although every buyer of the DVR secretly hopes that it will never be useful for its direct purpose, but we should not forget about the regular opportunities to record an interesting video or take a picture while driving in order to share it with friends on social networks later. Few vendors talk about this possibility, but all DVR users use it regularly.