Our most inquisitive readers in the world, of course, already know that Huawei presented a global version of the smartphone Nova 9, and along with it the smart watch Huawei Watch GT 3 and unusual-looking headphones FreeBuds Lipstick, whose charging case looks exactly like a tube of expensive lipstick. Of course, all of us are interested in the answer to the main question - what is going on with Huawei, how the company plans to continue living without Google services, and whether it is realistic to survive without these services? I have already had some speculation about this, but after meeting with Derek Yu, Vice President of Huawei Consumer Business Group in Central and Eastern Europe, all of these speculations were more or less confirmed.

Point of no return passed

The most important thing to understand about Huawei's plans and strategy in the smartphone market is that the point of no return has been passed, and the company will never return to smartphones with Google services. When I say "never", I mean that theoretically, in case the U.S. sanctions are lifted, Huawei may well release a few Android smartphones with Google services (hereinafter GMS), but these will be (if at all) tactical maneuvers that will have no impact on the company's global strategy. It includes full transition to its own operating system Harmony and development of ecosystem of devices based on it. Partly, this objective is already being achieved - the sales of Huawei Consumer Business is growing in the segments of wearable devices (91% for the year), TWS-headphones (111%), computers (27%) and Internet of Things devices (19%). And the company is also making plans for monitors, including gamers. Huawei will develop its HMS (Huawei Mobile Services), and has been doing so for over a year.

Derek Yu explained how this momentous decision was made.

"I remember well how everything happened in 2019, I'll never forget that date - May 16. The US government, as you know, imposed sanctions on us. You when did that happen? Then on May 19, Google notified us that it would not be able to provide GMS services for future Huawei devices. After that, we received a lot of questions from journalists, customers and partners about how things would happen. So we spent a lot of time explaining to them that for current devices we will still support GMS, devices can still be upgraded. As a result, we are keeping our sales of P-series smartphones, and persuading ourselves that one day we will get GMS. For several months of 2019, we took no action. We discussed the possibility of implementing GMS services with some third-party third-party solution. But we didn't take any action. Then at the end of that year, the boss gathered all the managers for a meeting to tell everyone - as of today, we're abandoning that idea. Get your asses up and go create HMS!" No, seriously - that's what he said, verbatim quote "Move your ass and go to HMS"

What is the role of the Huawei nova 9 smartphone

I personally like the design of this smartphone, and Huawei designs in general in recent years. This module in the form of not something like an eight or an infinity sign, I find more interesting than the "burners" of the new iPhone (I personally have a feeling that Jobs would have fired the designer who proposed such a solution, even when he saw the sketches). And I don't like those overly protruding camera modules in Samsung and Xiaomi smartphones. To my question "why not make the phone bodies a bit thicker, and fill this space with a bigger battery, which will never be superfluous", all representatives of smartphone manufacturers just shrug their shoulders, and refer to consumer tastes in opinion polls. They say consumers want thinner phones and that's it. I'm not ready to argue with the polls and surveys, but I have a suspicion that consumers will appreciate the increased battery life of a smartphone more, and they simply won't care about the extra two millimeters of thickness at that.

But back, to the nova 9. I'd like to talk about how it will bring back sales of Huawei smartphones, how it will change the decline, how much it can fundamentally change the situation. I wish I could, but I can't. Because there is none of that in him. But the paradox of the situation is that in the current situation Huawei does not need it. The Chinese market, where we all know there are no Google services, is quite enough for the company to survive, and therefore customers do not care at all about their absence. They learned to do without them a long time ago. All Huawei needs is time (a couple of years for sure, maybe more) to get its operating system up to speed, to make it attractive for both customers and application developers. One cannot say that the task is easy (for example, Samsung failed with bada, and Tizen, too), but there are still chances - Huawei employees have a lot of stubbornness and determination. In addition, all these difficulties concern only the software, and the company's hardware is in full order - two years ago, the P30 Pro surpassed the capabilities of Samsung smartphones in terms of camera. And all this technical potential of Huawei has not gone anywhere. It is there, and the company is not going to stand still. All it needs in foreign markets is to stay afloat, to hold out until the cavalry comes in the form of a working operating system that does not raise questions among buyers (the number of applications in the store and the lack of contactless payment are its most sore points today). In other words, Huawei needs interesting infographics to flash on the radars of buyers and journalists. And here we come to the question of why FreeBuds Lipstick TWS headphones were created.

Who needs FreeBuds Lipstick and why they were made at all 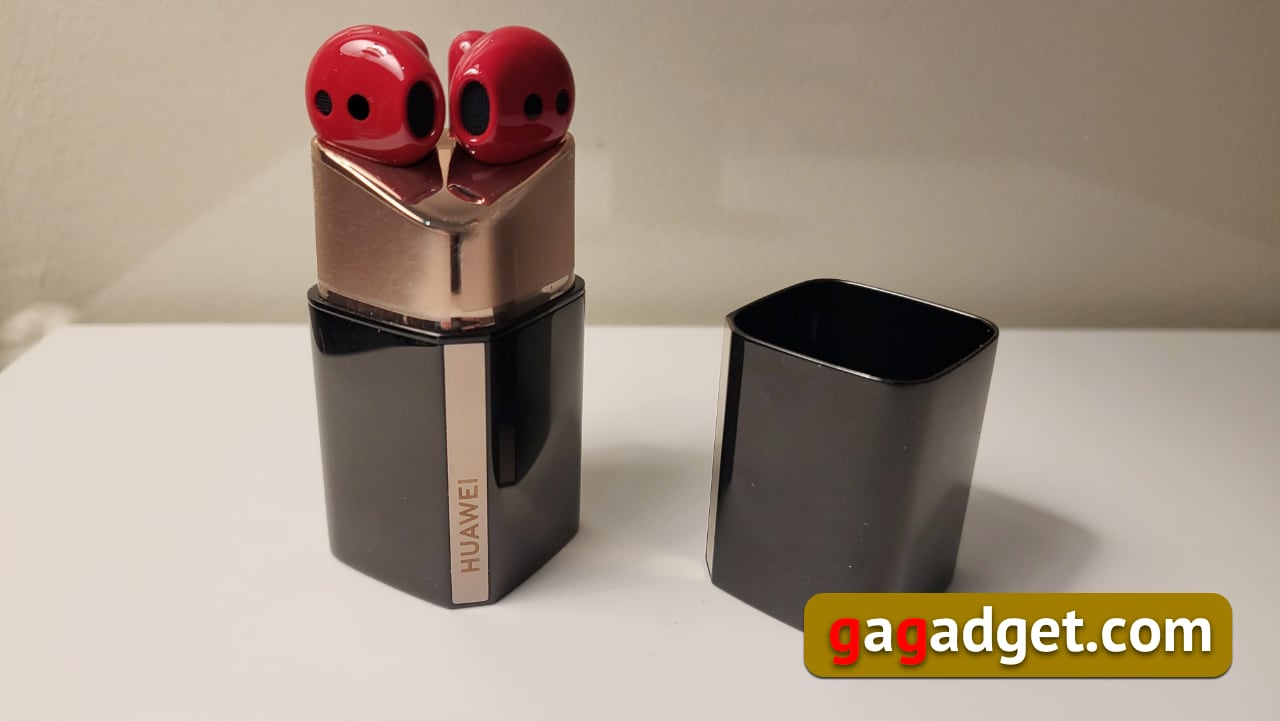 . Externally the new ones remind FreeBuds 4, only new color is red. There is a suspicion that this is the same, just repackaged headphones. And all this stuff reminds of a marketing experiment in search of new sales channels and sales methods. Conventionally speaking, I see how easily and effortlessly it will be possible to sell headphones with such appearance, in shops of expensive cosmetics and perfumery, where the price tag of 250 Euro does not look something alien. And the scenario of the purchase is also clear - a man in search of a gift for his paramour. The budget, the unusual look, the versatility of the gift (suitable for any smartphone), even the price (unless, of course, put these headphones on the shelf next to other headphones or in a store where they sell mass brands of cosmetics and perfume). All of this plays in favor of such an experiment. Not to mention the fact that such appearance and non-standard positioning can attract attention to the brand (which, in fact, is what Huawei needs at the current historical stage - your and our, as the media, attention). It is clear that this is an experiment, it is clear that in business 95% of experiments end in failure, but remember - such interesting and popular products like Motorola RAZR, Asus Eee PC or Galaxy Note were launched as experiments, with incomprehensible results.

No, the Huawei nova 9, for all its advantages, will not be able to change the balance of power on the market, no matter how much we would like it to. No, Harmony is not ready yet, and will not appear on Huawei smartphones in Europe until next year (at least that's what they promise). However, I personally have no doubts that Huawei will have enough strength and patience to complete the development of its operating system. And convince Chinese appliance manufacturers to use Harmony for their own magic. All it needs is to last a couple of years (though maybe more) and not leave other countries' markets. And get into high-profile news regularly thanks to products like FreeBuds Lipstick. And every time you hear about Huawei's new unusual, pattern-breaking product, you'll be reminded of those words.